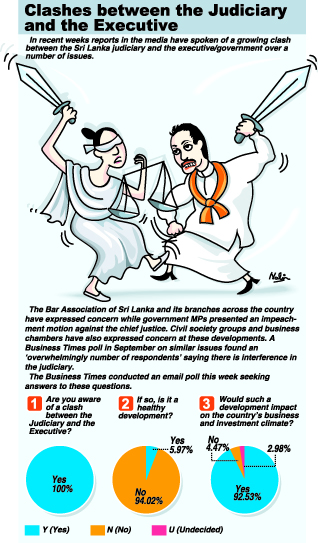 An overwhelmingly majority of Sri Lankans in a Business Times (BT) poll this week have expressed concern over the clashes between the judiciary and the President, which has resulted in an impeachment motion being filed by government MPs against the Chief Justice Shirani Bandaranayake.

The hurried email poll, in which people were given 24 hours to respond, drew more than 600 responses from a cross-section of society and reflected growing unease across Sri Lanka over recent developments. 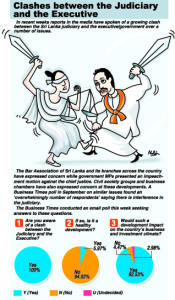 “Absolute arbitrary rule is spreading its tentacles to the last remaining independent institution of liberty – the judiciary. Without justice and rule of law not only business but all other interactions between members of society would be difficult to conduct,” said one respondent in written comments to the newspaper.

All the respondents, 100 per cent, said they were aware of a clash between the two executive branches of the government while 94 per cent said this was an unhealthy development. Another 92 per cent said the crisis would impact on business an investment.
The results were no different from an earlier BT poll in September on similar issues which found an ‘overwhelmingly number of respondents’ saying there is interference in the judiciary.

The email poll this time was not accompanied by the usual street survey by the BT’s polling partner, the Research Consultancy Bureau (RCB), as there was insufficient time for such an exercise. The poll questionnaire was sent out on Wednesday and closed on Thursday, following requests from readers for a survey on these issues to gauge public opinion.
One segment of the respondents felt the clash was a healthy one. “Given the way in which the constitution has been changed and the Executive has amassed power, I feel this is a healthy development in that the judiciary is finally asserting itself,” said a veteran economist, adding: “The outcome depends on how the differences are resolved in the best interest of the long term healthy relationship between these macro powers which must charter a path that ensures proper separation of powers.” His opinion was backed by a civil society activist, who like all respondents preferred to remain anonymous and said “though this is not a good development it may open the eyes of the people.”
Another legal luminary said the judiciary must uphold the rule of law and the Constitution, which is the very premise of the rule of law. “The judiciary should not have allowed itself to be compromised by favours from the Executive by seeking and/or accepting political appointments for kith and kin. The Executive (on the other hand) ought not to have so compromised the judiciary,” he said referring to political appointments received by Pradeepa Kariyawasam, husband of the Chief Justice.
He said “let alone foreign investors, all citizens are entitled to an independent judiciary, which is exercising the judicial power of the people, which is an integral component of the sovereignty of the people, which is inalienable.”
Other comments included:
n The resolution of the clash in a manner that the rule of law prevails and justice rules, will determine the long term health of business. Such a situation is vital to create a level playing field for not only for corporates but also SMEs, as well as foreign investment within a fair regulated investment environment governed by law and ethical conduct.
If the private sector and business is to drive the economy a proper ‘peaceful’ socio-political environment must prevail where all are treated equally and the final arbitrator is the judiciary, not politicians and powerful persons with influence.
In a way, depositors of the Golden Key may not be too unhappy asthey were promised by a Supreme Court bench headed by the Chief Justice that the crisis would be resolved by December 2011. Nearly one year has passed and but depositors are still waiting for the promise to come true.
The Judiciary and the Executive are two important elements of the country’s constitution. Thus, there needs to be a healthy balance between the two. The judiciary needs to be independent, and be encouraged to make decisions as per the laws of the country.
Impeachment motions against the chief justice is not a new phenomenon. Former President J.R. Jayewardene set the ball rolling, impeaching Neville Samarakoon, his own appointee, who subsequently quit. There were also a planned impeachment against Sarath Silva.
ST