Land Acquisition in the North Creates a Stir 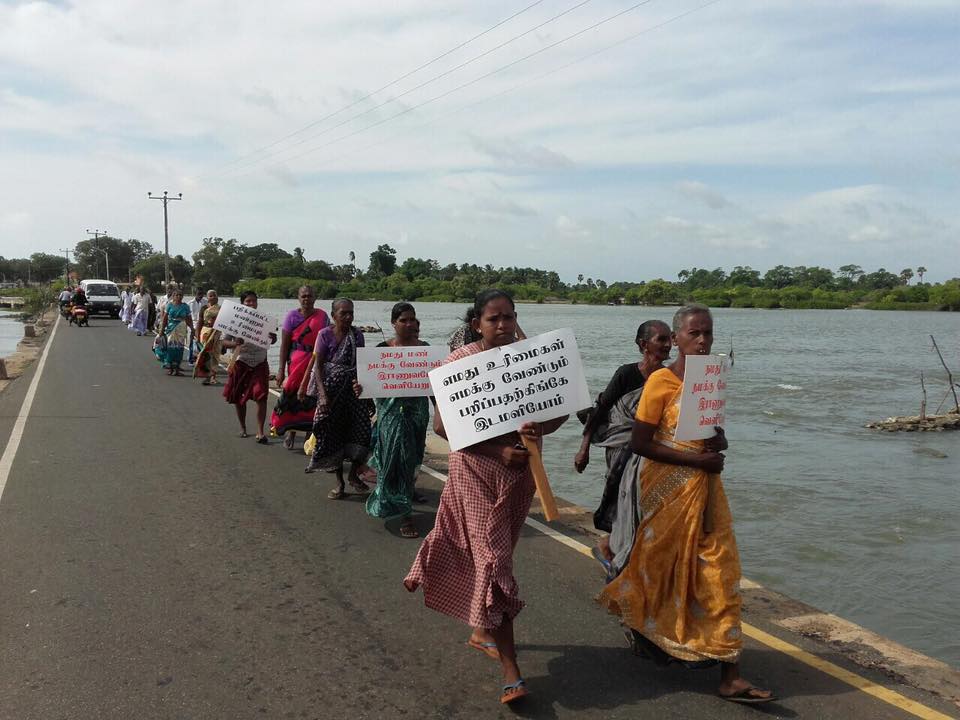 (Protest against land Acquisition in Vadduvaakal, North; image by Garikaalan)

An attempt to acquire private land in the North has created a stir with Tamils in the area raising strong objections and accusing the government of misleading the international community.

The government however denied claims there was a move to acquire private land in the North with Minister D. M. Swaminathan telling The Sunday Leader the government does not require more land for the military in the North.

Tamil National Alliance (TNA) member and former Parliamentarian Suresh Premachandran said that while publicly releasing private land, the military was also acquiring land in some parts of the North.He said that one such attempt last week in Mullaitivu was blocked by civilians and politicians in the area.

“The Navy is attempting to permanently take over some private land in Vadduvaakal in Mullaitivu where the final battle between the LTTE and the army took place during the war,” Premachandran told The Sunday Leader.

He said that on Thursday officials of the Survey Department had attempted to survey some 617 acres of land in the area.However Premachandran said civilians who owned part of the land protested together with politicians in the area and the move to survey the land was suspended.

“Most of this land belonged to people in the area but it is now being occupied by the military. The military is now trying to make it permanently theirs,” he alleged.He also claimed that the Navy has erected fences around the property and civilians cannot enter the area.

Premachandran said that more than 100 plots of land in several parts of the North including in Visuwamadu have been taken over by the military after the new government came to power.

“The people need this land for cultivation,” he said.

Meanwhile the Tamil United Liberation Front (TULF) also strongly objected to the government’s policy of acquiring private lands or even allocating state lands for the use of the services of the Army and the Navy in particular in rural areas.

TULF Secretary General V. Anandsangaree said that the TULF had always taken a positive and moderate view even on sensitive issues like acquiring private lands or allocating state lands at random without justifiable cause to establish a camp amidst civilians.

“I am shocked that when strong protests are made often by various organizations in the North and the East about this matter, the decision to acquire 617 acres of private lands for the Navy in Mullivaikkal of the Mullaitivu district is very provocative. I never look at any problem from a communal angle but always welcome reasonable actions of the government taken without any sinister motive,” Anandsangaree said. He noted that the country after 30 years of turmoil is limping back to normalcy but some happenings in various parts of the country are causing grave concern to the people and a lot of tension is prevailing in the North over this type of happenings.

“What is the hurry for the government to put aside attending to many urgent issues and to concentrate now in setting up camps for the services. Is there any urgent need for any army camp in the North. If so let the country know about it,” he said.

He also said that he was surprised that although the TNA had gone out of its way and extended its full cooperation to the government, the government is causing embarrassment to them.

“This is an issue serious enough for the TNA to withdraw its support to the government. The TNA is misusing the term TNA to the advantage of one single party in the Alliance, which itself has no legal status to function as a political party. I call upon the TNA Parliamentarians of the Ilankai Thamil Arasu Kadchi (ITAK) to resign their seats if they can’t prevent the opening up of more and more camps all over the North and the East, which action justifies the fear of the minorities that the government does not take the minority’s objections seriously,” he said.

Anandsangaree said he was sure that every right thinking person of all communities in this country will agree with him that the action of this government is totally provocative and should be condemned.

“I am always of the view that there can be one or two camps at important places, without establishing camps in the midst of civilian population and the soldiers are confined to the barracks. It is understood that much earlier, the people had complained about this to the members of Parliament and Provincial Councils when the army was fencing the area now in dispute. But no action had been taken so far. Contrary to that the said land is to be surveyed now for the purpose of acquisition. I think the time has now come for the Federal Party members of Parliament in the TNA to quit the alliance and also to resign their seats in Parliament,” he added.

However Resettlement Minister D.M. Swaminathan said that his Ministry has not been notified about any acquisition of land and as to his knowledge the present government does not need any land for the military as it serves no purpose to set up camps now.

“If Mr. Anandasangaree informs about the specific areas that have been released, to us or to any other relevant party we can definitely look into this because we are constantly in touch with the Defence Ministry to get the military occupied lands released to expedite resettlement,” the Minister told The Sunday Leader.

Premachandran said that the Ministry of Defence is aware of the fresh land acquisition and the government is turning a blind eye to the issue.The international community has been urging the government to release private land and ensure full normalcy returns to the North and East.

The issue had also been raised at the UN Human Rights Council in Geneva by council members and the High Commissioner for Human Rights.