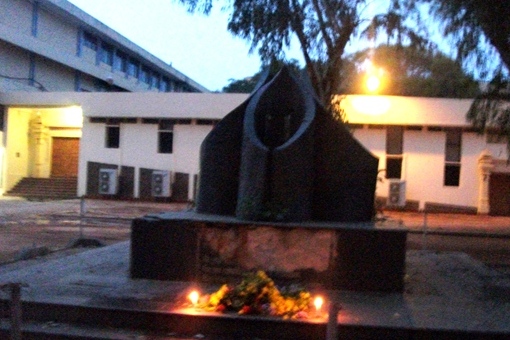 Defying the strict instructions by the occupying Sri Lankan military, the people of Jaffna on Tuesday tolled temple bells amid military patrols at 6:07 p.m. in remembrance of heroes. SL soldiers were taken aback witnessing the resolve of the people and hearing the sound of temple bells coming from all directions. Heroes Day remembrance was peacefully and emotionally observed by all the sections of people in the peninsula and in Vanni who lit candles inside their homes. Meanwhile, SL soldiers who entered into the gents’ hostel of the University of Jaffna, where the Heroes Day Common Flame was lit last year, guarded every single room and climbed on to the terrace to prevent it this time. But the flame was lit at the second floor of the Ladies’ Hostel, sharply at 6.07 p.m.

After lighting the ceremonial Common Flame, the students also paid tribute to the heroes, inside the hostel.

Following this, the ladies’ hostel called Ananda Coomaraswamy Hall came under the attack of the Sinhala soldiers who entered the ladies’ hostel, smashed some of the windows and started attacking the inmates. The soldiers harassed students from Vanni.

The Vice Chancellor of Jaffna University dispatched a team consisting a dean, a senior lecturer and some officials to ensure the safety of female students at the hostel, following complaints from the girls that they were getting attacked.

Earlier, the SL military deployed in large numbers at the gents’ hostel called Balasingham Hall, rounded up and attacked the male students.

Students who manoeuvred away from the round up and attack lit the Common Flame at the Ananada Coomarasamy Hall.

E. Saravanapavan, a Tamil National Alliance (TNA) parliamentarian, narrowly escaped from the attack by SL soldiers when he attempted to reach the hostel at the request of the students who complained of assaults by Sinhala soldiers. The SL soldiers began to throw stones at his vehicle, causing damage.

A journalist from the Uthayan daily, who accompanied Mr Saravanapavan, was chased away by the SL soldiers. The SL soldiers attempted to snatch away his camera.

The parliamentarian who fled the scene has lodged a complaint at Jaffna Police station.

Earlier in the day, an SL military-operated squad in civil cloths had entered the premises of the university, pointing handguns at the students and threatening them to leave the premises. A large number of students were forced to flee from the University and hostel premises.

Later, SL Army soldiers were deployed inside the gents’ hostel, to guard almost every room and to climb on the top of the water tank where the Common Flame was lit last year.

Journalists in Jaffna also complained that they were being closely monitored by the SL military intelligence.
TN

A Sri Lankan military intelligence backed squad entered the house of Mr. Anaimukan Velayutham, the head of the civic council (Piratheasa Chapai) of Kaarai-nakar, who is a Tamil National Alliance (TNA) member and a leading trader in Jaffna, and set fire inside his house using burning tyres, news sources in Kaarainakar islet off Jaffna told TamilNet. Mr. Anaimukan was threatened by the gang, alleging that he had observed the Heroes Day by lighting lamps and conducting special prayers at the temples in Kaarainakar.

The neighbours brought the fire under control.

When contacted, Mr. Anaimukan said that the squad had threatened him at gunpoint.

Last year too, after the Heroes Day, his house situated in Thirunelveali had been attacked, allegedly by a Sri Lanka Army squad that had opened fire and lobbed grenade and petrol bomb into the house.

The attack on the house of Mr Anaimukan last year came hours after an interview by him to BBC Tamil, in which he had exposed that the occupying SL military had instructed temples in his civic division not to toll bells, not to light lamps and not to use loudspeakers during the Heroes Day observation week.
http://www.tamilnet.com/art.html?catid=13&artid=35797