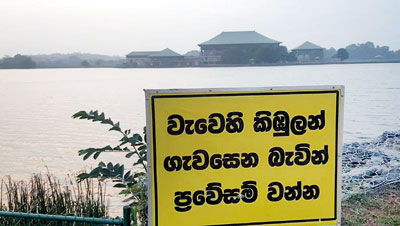 Image: Sigm board near parliament in SInhala only says BE WARE CROCODILES IN THE LAKE.

Place name boards (above) and public warnings (below) only in Sinhala and English. Pix by Indika Handuwala

On December 28, Aingkaran Kugathasan accompanied a friend to the Jaffna police station to lodge a complaint. It was around10.40 a.m. and there was a long queue. But even after one hour, the line did not move.

“When we inquired, we were told there was only one policeman conversant in Tamil and that he had been summoned by a senior police officer for an urgent matter,” Mr. Kugathasan, an attorney-at-law, said. He returned over one-and-a-half hours later. And their turn came around 1.15 p.m.

“Just as the policeman started recording my friend’s statement, we were told there was an issue at the Governor’s office and that he had to go there,” Mr. Kugathasan said. “And we were asked to come the following day.”

This is just one in many problems faced by the people on a daily basis owing to a failure to implement the Official Language Policy.

The fundamental law on languages is enshrined in Chapter IV of the 1978 Constitution. These provisions were amended by the 13th and 16th Amendments in 1987 and 1988, respectively. Accordingly, Sinhala and Tamil are both official and national languages of Sri Lanka while English is the link language. Article 12(2) in Chapter III of the Constitution recognizes the right to language as a fundamental right.

But language policy implementation has moved at a snail’s pace over the last few decades. The lack of bilingual proficiency in the State sector is an obstacle to reconciliation, states the recently released final report of the Consultation Task Force on Reconciliation Mechanisms (CTF). “Shortcomings in bi-lingual language proficiency throughout the machinery of the State were identified in most submissions across the country as a major impediment to reconciliation,” it said, recommending that the issue be addressed as a priority.

There are over 100 laws and gazettes still to be translated from English to Sinhala, Mr Lionel Guruge, a senior researcher at the Centre for Policy Alternatives (CPA) said. And more than 200 of them haven’t yet been translated into Tamil. The Supreme Court is currently hearing a fundamental rights petition in this regard.

The CPA has filed over 1000 complaints on language rights with institutions such as the Human Rights Commission of Sri Lanka (HRCSL) or courts. Some notable cases include action regarding language equality in legislation, information on National Identity Cards (NICs), pharmaceuticals, currency notes, signboards on buses and railway announcements.

“We had to lodge complaints even to ensure destination boards on buses are displayed in all three languages,” Mr. Guruge said, voicing frustration about failure to carry out such basic obligations.

People were also largely ignorant of their language rights. This can sometimes have tragic consequences. A man from Moratuwa obtained an insurance policy after signing a document in English. When he lost a thumb in an accident, the company refused to pay up saying the agreement he signed had stated compensation could be obtained only if he lost a whole hand.

“He came to us, but he had already signed a legal document,” said Mr. Guruge. Everyone has the right to demand a document that needs signing in a language they can understand, he stressed.

A recent study by the Ministry of Official Languages on bilingual officers in 13 public institutions across 25 districts found there were at least 2,223 vacancies. At least 1,349 of them were in the Police Department.

But the numbers are clearly inadequate considering that the force consists of some 75,000 officers of lower rank, a majority of whom speak only Sinhala, NPC Secretary Ariyadasa Cooray conceded.

The police are just one agency that has badly failed in implementing the 0fficial language policy. All State employees are required to attain proficiency in a second language within the first five years of employment. A 2007 circular issued in this regard is still in force. The Official Languages Department facilitates effective implementation of the language policy. But even officials in this Department admit that trying to compel all State workers to learn a second language has failed.

The proficiency exam tests both written and oral skills. The Department’s Research Unit analyses results after each round of exams. The latest assessment makes for grim reading. Just two per cent of candidates scored over 75 marks in the second language in 2015 and 2016. Some 60 per cent who passed had obtained around 40 marks–the minimum score. Their knowledge is wholly inadequate for productive work. The Research Unit has observed that efficient service can be expected only from the two percent that scored 75 marks or over.

“Most who follow language classes do so with the sole purpose of passing the exams,” said Official Languages Commissioner W. A. Jayawickrama via e-mail. Their interest in the language wanes rapidly after the exam. The Research Unit has concluded that it was “pointless” to try and train all Government officials in a second official language.

To make better use of the second language initiative, the Unit has recommended that the State sponsors language education among employees who show genuine interest in learning and in the culture of the ethnic group to which that language belongs. These candidates could then be subjected to continuous assessment by the Official Languages Department or another language education institution. It is proposed that employees who pass these tests should then receive incentives placing them on a higher salary scale than others in the same designation.
51 p.c. of national issue solved if allowed to carry out my plans: Minister Mano Ganesan

Mano Ganesan is proud of being the first subject minister proficient in all three languages. He insisted that language law implementation was essential to a political solution to the country’s national issues, in an interview with the Sunday Times. If allowed to freely carry out his language plans, the Government can solve “51 per cent of the national issue,” he said.

This creates situations where poorly-qualified people make basic mistakes that insult whole communities. Mr. Ganesan referred to a photograph sent to him of a sign fixed above a bench in a Government office. In Sinhala, it read, “Reserved for pregnant mothers”. The Tamil script said, “Reserved for pregnant dogs”. He cannot dream of a bilingual State service even within the next few decades, the Minister said.

He once asked the officer-in-charge (OIC) of a police station in Colombo how he would deal with a complainant who knew only Tamil. The OIC had introduced him to a Tamil-speaking Sinhala officer who did that job. The Minister then struck up a conversation with him in Tamil. “Within a minute, I found he could speak very little Tamil,” he recounted.

The officer had no academic qualifications in Tamil. He had picked up bits from tuition classes. His skills were clearly inadequate for someone tasked with so serious a responsibility’ as a complaint is taken down in Sinhala and the complainant is required to sign it, the chance for error is high.

“I realise this is neither the fault of the OIC nor of the officer,” Mr. Ganesan stressed. What this underlines is the need for professional interpreters and translators in the State sector.

A Cabinet Paper is due to be presented soon seeking approval to recruit, train and appoint an initial batch of 3,000 “bilingual assistants” to all State institutions requiring such service. They would be picked from among those who had sat for the GCE A/Level or O/Level exams and had passed second language subjects.

Another Cabinet paper has already been submitted seeking amendments to the scheme of recruitment for State services enabling those with bilingual abilities to score extra marks at recruitment interviews. Among other things, the Minister wants Cabinet approval to amend the Official Languages Commission Act enabling legal action against all violators of language policy.

Other immediate measures are also being taken on four fronts, he said. Steps will be taken to ensure all external and internal movable and immovable signboards are trilingual. All documents and forms for public use will be available at State institutions in the three languages. Efforts will be made to ensure citizens receive oral and written responses in the official language of their choice or the link language at all State institutions. The Ministry will push institutions to commit towards an official language policy in all Government offices.

The Government will encourage the private sector to implement these. Mr. Ganesan does not see anyone obstructing the plans. Even the Joint Opposition led by Mahinda Rajapaksa has assured its support for implementation of the language policy

“I trust the President, Prime Minister and Cabinet would support me in achieving my targets,” he said. “If I can’t get it done, I don’t think I’ll waste my time continuing as a Minister.”