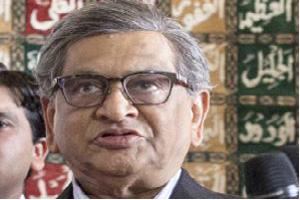 President Mahinda Rajapaksa has himself declared that the talks – of which 18 rounds had taken place before January — will remain suspended until TNA joins PSC. India took up the issue with the Lankans during Rajapaksa’s recent visit here insisting that talks must resume while describing TNA as a credible alliance.
The delegation also called on PM Manmohan Singh. Sampanthan conveyed to both the leaders that the TNA would consider joining the PSC on finding a political solution provided the Rajapaksa government gives a firm assurance that they would not be “cheated again”.

Terming the meeting with Singh and Krishna as “extremely good”, he said the TNA told Singh that the party was committed to achieving a political solution but would want an assurance from the Sri Lankan government that the “negativity” would be removed.

“Prime Minister said India would never backtrack from its position that Tamils in Sri Lanka should lead a life of dignity and self respect in a peaceful environment. He told us that India is fully with Sri Lankan Tamils and would continue to engage with TNA,” Sampanthan said.