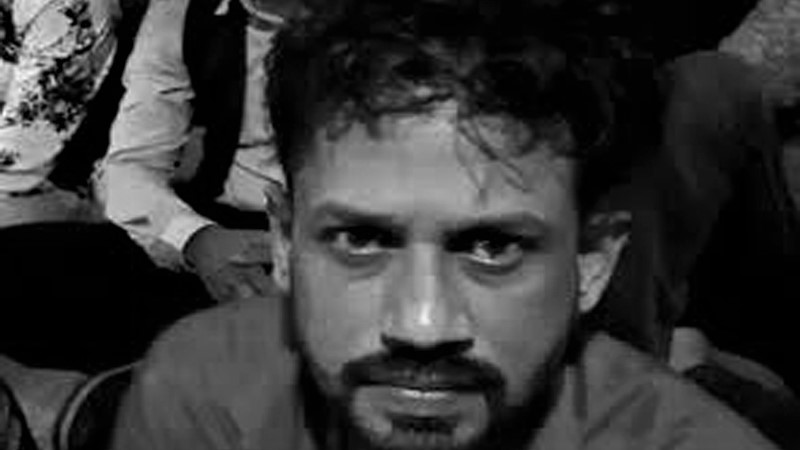 Calling of the President of the Bar Association of Sri Lanka to condemn the police action in the strongest possible terms, the attorney representing “underworld” figure Makandure Madush,   says that the narrative provided by the police on the incident which led to the death of Madush was a “pure fabrication”.

I write on the instructions of the wife of my above named client who was murdered this morning, 20th October 2020, ostensibly whilst in the custody of officers of the Colombo Crime Division.

You are aware that my about named client was held on a detention order under the Prevention of Terrorism Act number 48 of 1979, which was renewed from time to time. The last such detention order was dated 28th of July 2020 and was to expire on the 28th of October 2020.

You are aware that in terms of Prevention of Terrorism Act, such a detention order should only be made for a period of 18 months. Accordingly, my client continued to detention was to lapse on the 28th of October 2020.

However legally and arbitrarily my client was moved from the Criminal Investigations Department to the Colombo crimes division on the or around the 16th of October 2020.

The said move was legal and was a prelude to the incident which took place this morning.

Feeling such an imminent threat to the life of my client, his wife upon our advice wrote to the director of Colombo Crime Division on the 17th of October 2020 and inform them by way of a phone call regarding the ruse by state agencies. They said later is annexed here too for your reference.

The letter specifies the clear fear and apprehension of the manner and the mode of the murder of her husband whilst in the police custody.

Please recognized that as a civilized society which respects the Rule of Law the recent state of murders whilst in the custody of law enforcement agencies have gone unpunished with no investigation into the veracity of narrative being forced down the public.

It is recognized that no civilized society should condone this behaviour.

You are aware that the narrative put forth today by the law enforcement agencies regarding the murder of my client, is on the face of it, is pure fabrication.

I kindly request you to hereby urgently take up the instant matter with the relevant authorities and condemn the action in the strongest possible terms.

I wish to part this later with the wisdom of Chief Justice Sharvendra who was in the case of Amal Sudath Silve VKodithukakku, Inspector of Police 1987 2 SLR 119 held inter alia.

“Nothing shocks the conscience of a man so much as a cowardly act of delinquent police officer who subjects a helpless suspect in his charge to depraved and barbarous methods of treatment within the confines of very premises in which he is held in custody. Such actions on the part of the police will only breed contempt for the law and will tend to make the public lose confidence in the ability of the police to maintain lower and order. The petitioner may be a hard core criminal whose tribe deserves no sympathy. But if constitutional guarantees are to have any meaning or value in our democratic setup, it is essential that he will not be denied the protection guaranteed by our constitution. 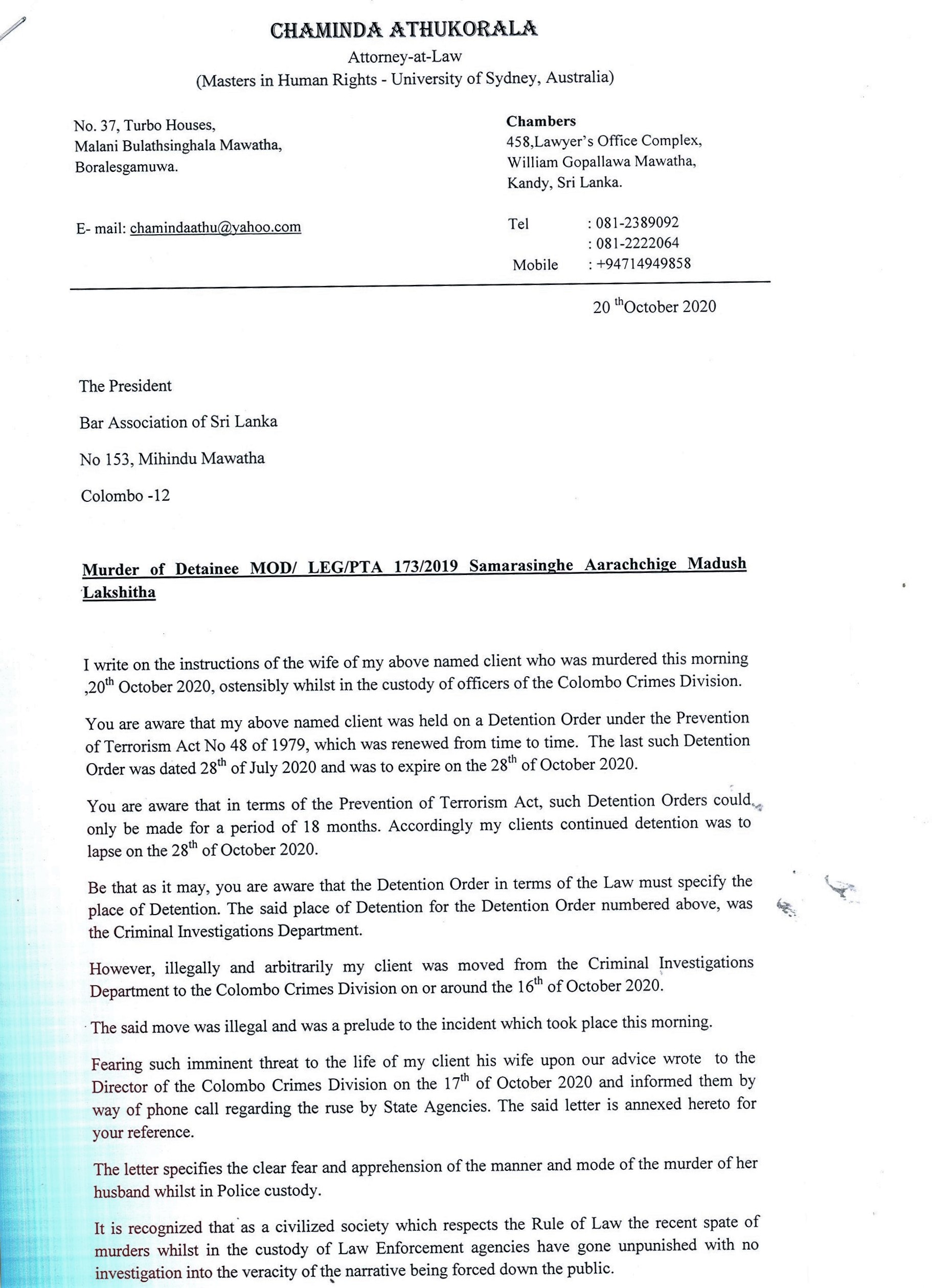 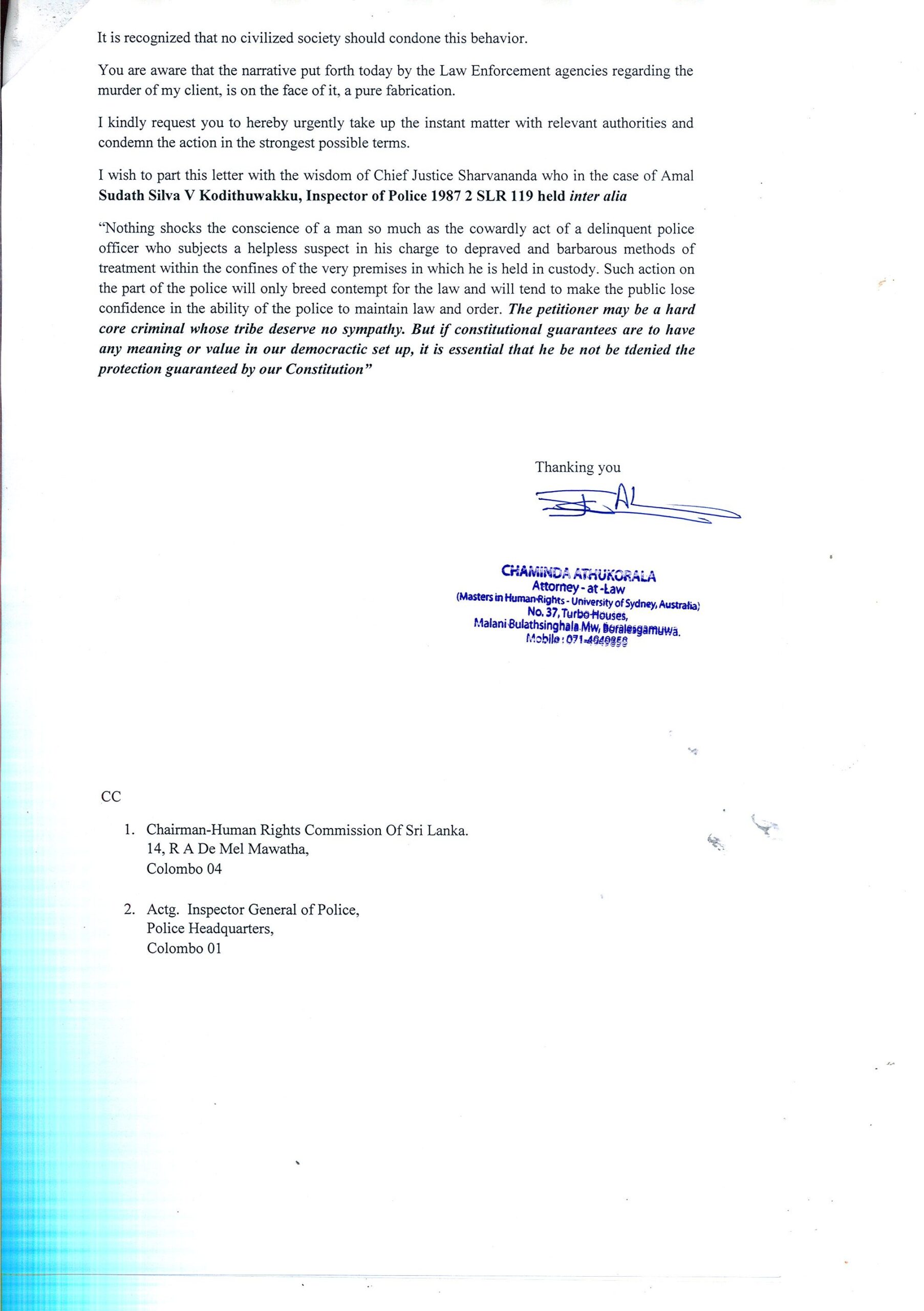