Khurshid says accountability must for rights violations in Sri Lanka 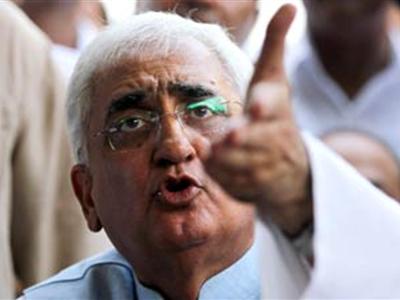 In the wake of fresh allegations of rights violations against ethnic Tamils in Sri Lanka, India on Wednesday said there should be accountability for such issues but remained evasive on the position it will take at the UN on a resolution against that country.
External affairs minister Salman Khurshid made it clear that India would not intervene directly in Sri Lanka’s sovereign affairs even as members in the Rajya Sabha expressed serious concern over the situation there and demanded an independent credible probe into the killing of LTTE chief Prabhakaran’s 12-year-old son Balachandran.

DMK, a key UPA constituent, said it has lost faith in the government on this and its members staged a walkout along with those from AIADMK and Left, dissatisfied with Khurshid’s reply to the debate on the plight of Tamils in Sri Lanka.

“We are totally and utterly committed to the outcome that must ensure equality, dignity, justice for the Tamil people of Sri Lanka,” Khurshid said, sharing concerns expressed by members cutting across party lines.

On the recent allegation about Balachandran being killed in cold blood by the Sri Lankan forces, he said India cannot “adjudicate” about the truth behind the incident and apportion the responsibility on anybody for the “very moving, very tragic, very sad” incident.

Responding to demands by members that India should vote with the US resolution in the UN against Sri Lanka on it, he said, “What point we make in the UN can’t foreclose today. We will make position keeping this debate in mind. After taking position we will disclose here…”

As members repeatedly sought to know the position of the Government of India on the resolution, Khurshid said it depended upon the actions taken by Sri Lanka.

The debate also saw members raising demands like disallowing Sri Lankan President to visit India and even sending Indian troops there again to check the alleged “genocide” and “ethnic cleansing” of Tamils in that country.

As some members including AIADMK’s V Maitreyan objected to Khurshid describing Sri Lanka as a friendly country, the minister said, “We may have differences, pain, disappointment, anger and anguish but we should not be saying that Sri Lanka is an enemy country. It is not.”

As CPI’s D Raja wanted a categorical assurance from Khurshid that Sri Lanka will not ignore the 13th amendment, he said, “I cannot give assurance about what another government will do.”

The minister said he wanted to reiterate the commitment of this House, Government and people to see the end of hostilities and do “what can be done to compensate for the enormous amount of suffering” the Sri Lankan Tamils underwent.

“Government is of the view that the end of the conflict in Sri Lanka provided a unique opportunity to pursue a lasting political settlement within the framework of a united Sri Lanka, acceptable to all communities in Sri Lanka including Tamils,” he said.
HT