Key witness’s death ‘too coincidental to be a coincidence’ 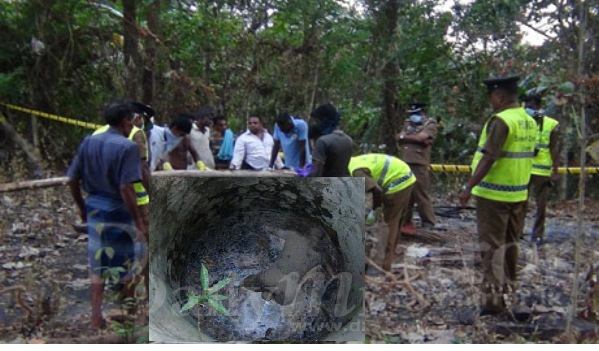 Major opposition United National Party (UNP) says that that ‘A key witness in the trial against a former ruling party Provincial Council Member who forced a teacher to kneel down in her school, was found dead in an abandoned well in the Nawagattegama area’ and that ‘it is clear that the incident is too coincidental to be a coincidence.’

R.A.H.M. Pungnasoma Bandara (58) of Nawagathtegama,  the  key witness in the trial against a former ruling party Provincial Council Member who forced a teacher to kneel down in her school, found dead in a abandoned well on 1st August.  According to reports he had been threatened not to give evidence if he has desire to live, by the politician him self. LankaeNews reports that although he tried to make complaint to the police he was turned back warning him not to give evidence.

“If the life of a witness in a trial against a ruling party politician is in jeopardy, that alone is suggestive of the present state of affairs in the country.” says UNP in it s statement,

A key witness in the trial against a former ruling party Provincial Council Member who forced a teacher to kneel down in her school, was found dead in an abandoned well in the Nawagattegama area.

The court case made headlines in the media as it was the first time a school teacher was physically punished by a politician for discharging his/her duties. The deceased, according to media reports, had apparently given valuable evidence in the case against Ananda Sarath Kumara, who is a former UPFA member of the North-Western Provincial Council.

The circumstances which led to the death of the witness in the case against the UPFA politician remain obscure. However, it is clear that the incident is too coincidental to be a coincidence. As the Police Media Spokesman has converted himself into a stooge of the powers that be, the country cannot expect a true and fair statement from him over this tragic death. Chances are high that this incident too might be swept under the carpet of “mysterious deaths” – which has been a trademark of law enforcement in this country ever since the Rajapaksa Government took office. Reports have also come to light about the suspected drug dealer who has been shot dead by unidentified gunmen in the heart of Borella. Masked armed groups and “unidentified” gunmen appear to be rampaging in the heart of the capital, but this is not a situation the regime appears to be concerned about.

If the life of a witness in a trial against a ruling party politician is in jeopardy, that alone is suggestive of the present state of affairs in the country. In every aspect of social life, the breakdown of the rule of law is palpable. The Government has permitted this impunity to reign, acting only when forced to do so because of international pressure. The restoration of public confidence int he law and order machinery is just not a priority for the rulers. In an unprecedentedly corrupt and violent regime, the law and justice have become tools in the hands of uneducated and uncivilized politicians of the ruling party. There is no separation today between the Government and the Police Department that functions as a mere appendage of the ruling coalition.

It is in this abysmal backdrop that the Ministry of Defence, which is the overseer of national security and many other aspects of life in Sri Lanka, found itself in an embarrassing position over a defamatory article that was published on its official website last week. The official website of the Defence Ministry (www.defence.lk) published an article by a writer by the name of Shenali Waduge, along with a caricature deeply offensive to the Prime Minister of India and the Chief Minister of Tamil Nadu. The Sri Lankan Government was badly embarrassed after the Indian Government took the issue up at the highest levels, demanding an unconditional apology. Within 24 hours, the Ministry of Defence had to tender an apology to the Indian Prime Minister Narendra Modi and Chief Minister of Tamil Nadu Jayalalitha Jayaram over the article and the picture that was published. In a ridiculous twist the Defence Ministry in its “unqualified apology” claimed that the article had been published on its website without authorisation.

This is the level of irresponsibility which is now ruling the roost at the country’s defence establishment. On the other hand, this is the same unprofessional behavior that plunged Sri Lanka into trouble when it came to war crimes allegations and accountability issues. This blunder made by the Ministry of Defence underscores the recklessness and devil-may-care attitude of the present regime when it comes to affairs of state. In its damage control over the unfortunate caricature, the Defence Ministry is bending over backwards to express regret and apologise, yet its website has long since become a haven of content of the most racist and partisan type, often implicating without proof or substantiation attacks on diplomats and foreign governments.

It is also a reflection of the culture of fear inspired by the Defence Ministry of Sri Lanka, that has become the centre of all power in the incumbent regime, that the local English press had completely omitted publication of the “unqualified apology”, despite the diplomatic row the entire incident caused. Terror and impunity are what the Rajapaksa regime thrives on. To expect this Government to uphold the rule of law or mete out justice against heinous crimes is futile, since no one is served better than the regime itself by the breakdown of the justice system in this country.
August 2, 2014