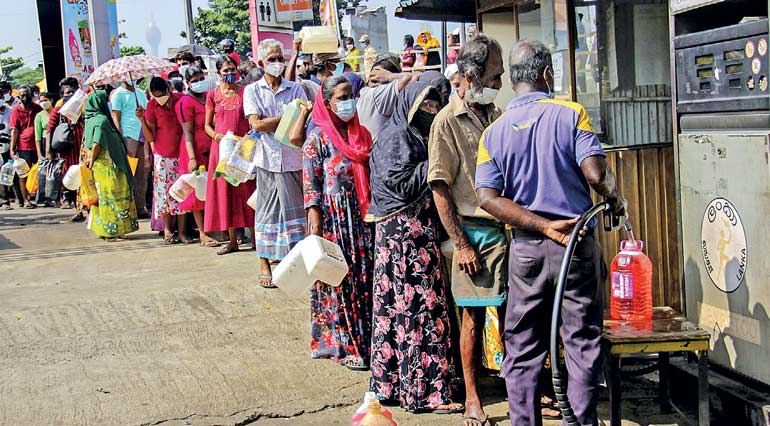 The Government has launched a devastating assault on working people across the rural and urban divide. The increase of the kerosene price from Rs. 87 to Rs. 340 a litre—or roughly quadrupling the existing price—will have a tremendous impact on people’s livelihoods. Fisherfolk dependent on kerosene for their boats will be among those hit hardest. But so also will be the small farmers who use kerosene for irrigating their farms and the urban poor who depend on kerosene to cook.

The increase is no doubt in line with the recommendations of the IMF to implement “cost recovery energy pricing.” But much like the disastrous decision to ban chemical fertilisers last year, the kerosene price hike will set the rural and urban periphery on fire. How will working people respond?

If the fertiliser ban in 2021 managed to stimulate unprecedented protests in the Rajapaksa strongholds in the south, the response to the kerosene price hike is likely to converge and acquire new dimensions. Much of the focus in recent months has been on the uprisings led in part by urban youth, who girded the great revolt that ousted Gotabaya Rajapaksa. The obvious class character of the kerosene price hike will provide a fresh impetus to the struggles.

A fisherman in Jaffna generally hires a helper to go out to sea on a small fiberglass boat powered by an outboard motor. Depending on the point from which they start in the peninsula they may use roughly 30 to 40 litres of kerosene per day, and no less than 10 litres if they are doing near shore fishing off the islands.

In the recent past, in 2012, for example, the IMF-recommended fuel price hikes including the 49% increase in kerosene oil, led to militant protests in the fishing community, resulting in state repression and the murder of a protestor. The government of Mahinda Rajapaksa was subsequently forced onto the backfoot. In addition, the past year of struggles has raised people’s consciousness to new heights and created a national awakening for resistance to illegitimate governments. Any government that does not understand the implications of the kerosene price hike is playing with fire.

To understand why the kerosene price hike is akin to setting the countryside especially aflame, we must grasp the everyday livelihoods in which it is embedded. To use one example, a fisherman in Jaffna generally hires a helper to go out to sea on a small fiberglass boat powered by an outboard motor. Depending on the point from which they start in the peninsula they may use roughly 30 to 40 litres of kerosene per day, and no less than 10 litres if they are doing near shore fishing off the islands. They usually divide the income four ways to cover payments; one share for each of the fishermen, another share for kerosene, and then the last share for the use of the boat, nets and the cost of their depreciation. Accordingly, when the price of kerosene quadruples, we can see that it becomes practically impossible to sustain their livelihood.

The resulting impact on the rural economy is likely to be devastating. Food production is already reeling from the fertiliser ban last year. Beyond all the other price hikes and shortages that have occurred over the past year, this most recent hike is a gut punch to those who depend on kerosene for their basic ability to participate in economic life. There is no doubt, of course, that the Government and the neoliberal establishment will argue that the price hikes can be contained through targeted subsidies and relief; but working people, and certainly the fisher folk are not likely to fall for this deception they have heard many times in the past. The Government’s deceitful strategy of not delivering kerosene for close to three months by claiming shortages, and waiting until the last moment to try and impose the price hike after consolidating more power, is plain and clear to all those who use kerosene.

But for a commodity that is so essential to a diverse group of people, effects of the increase in price cannot be contained with irregular or otherwise piecemeal transfers, which ignore its fundamental role in working people’s livelihoods. The fact that the policymakers do not seem to understand the ramifications throughout the economy of price hikes for essential goods, along with their narrow definition of the most vulnerable, means that they are blind to the potentially disastrous impact both in terms of production and demand. In many ways this ignorance recalls the hubris of the defunct Rajapaksa government and its overnight decision to ban chemical fertilisers.

The effects of these price hikes will trigger a response. What that reaction will look like may be uncertain. But anyone who thinks that people’s anger in the countryside and in the urban periphery can be contained with talk of meagre concessions is sorely confused. The only type of policy that can prevent another disaster from occurring is redistribution to cover the effective cost of subsidies, while actively pursuing longer term plans to increase investment and support for rural reconstruction. In contrast, cost recovery energy pricing, or price hikes, will have a disastrous impact.

Kerosene especially is the vector along which the economic breakdown within Sri Lanka’s entire polity can be traced. If the Central Bank Governor himself has admitted that the economy will contract by 8% this year, then it is truly incomprehensible how anyone can even think of inflicting more economic pain on a suffering people. The market is clearly failing. Anyone who thinks the market will automatically adjust to an acceptable equilibrium is throwing out all the lessons we learned through Keynes, among others, about the Great Depression of the 1930s, which almost brought capitalism itself to an end.

The fact that the Government in Sri Lanka today could so severely hike the price on an essential commodity for the rural and urban working people reflects its fundamental disconnect from reality on the ground. This does not bode well for its longevity. It reminds us instead of the tone-deaf approach that marked the Government of Gotabaya Rajapaksa. If Rajapaksa’s own support could collapse so rapidly, the current administration should begin packing its bags, if it thinks it can inflict shock therapy on a people who are already suffering. Clearly only a major and immediate course correction can prevent further disaster. The ruling elite will have only themselves to blame when the working people respond with the fury that mirrors the impact of the kerosene price hike on their own lives.