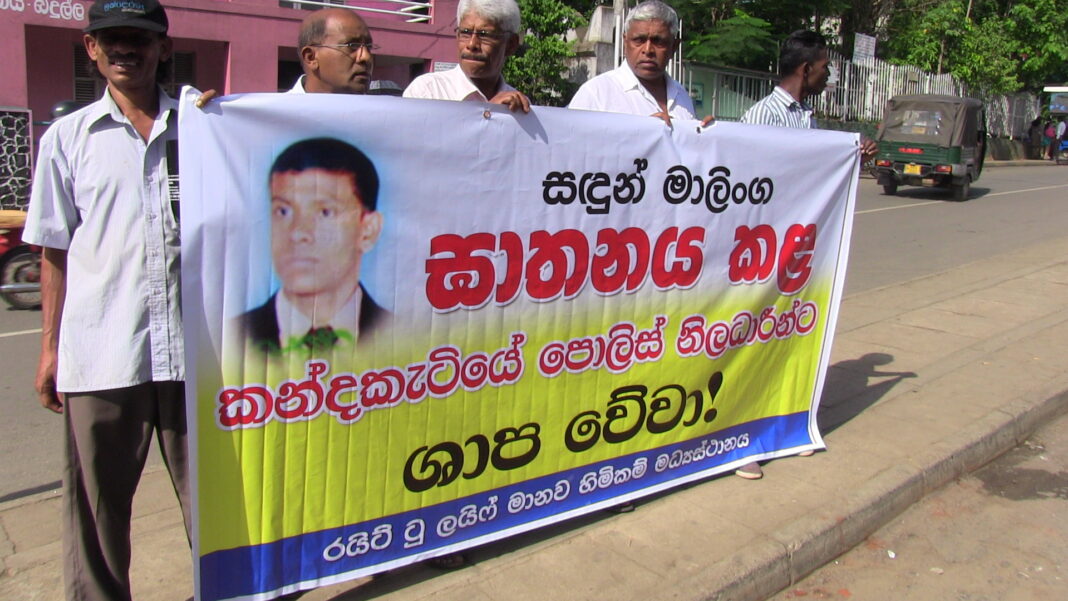 On the May 7, 2014 Sandun Malinga, a 17 year old boy and four others with him were beaten by police officers, arrested and detained at the Kandaketiya police in the Badulla district. The next day, around 2.30 am, Sandun complained of chest pains when his mother visited him at the police station but police officers refused the mother’s request to admit him to hospital. The mother visited him again around 7.30 am and saw him in a bad condition, lying on the cold floor while crying. When she had rubbed his chest, she had realized that the chest region was swollen. She again pleaded with the police to admit Sandun to hospital. Sandun and the other four were taken to the District Medical Officer (DMO), brought back to the police, taken to a Magistrate and remanded in the Badulla remand prison in the evening. The following day, May 9, around 5.30 am his brother who had been also remanded saw Sandun panting and struggling for breath and alerted the prison officers who took him to the hospital but it was too late to save Sandun’s life.

Sandun’s family, helped by lawyers and activists, campaigned for justice and on January 9, 2017 the Badulla High Court sentenced to death five police officers and a civil defense force officer for causing Sandun’s murder[i]. On May 21, 2021 in a fundamental rights case, the Supreme Court (SC) awarded compensation to Sandun’s mother, declaring that the same six officers had violated the constitutional rights of Sandun[ii]. The specific rights violated were the right not to be subjected to torture, cruel, inhuman and degrading treatment (Article 11), equal protection of the law (Article 12-1) and not to be arrested except according to due procedure established by law (Article 13-1). The post mortem report revealed several injuries including blunt force head and chest injuries involving the brain, heart and lungs, which according to the SC were not due to a ‘commotion’ or a result of the use of ‘minimal force’ as claimed by police officers but due to heavy attacks. The SC also awarded compensation to the other four arrested with Sandun whose rights were also violated by the same officers in the incident.

The SC had noted that as per the post mortem report, early medical attention could have saved Sandun’s life. While the police who did the assaulting and beating were judged to be the primary violators, the SC judgement also indicated negligence of several other officials but, to my knowledge, none of them have been held professionally or criminally accountable for their negligence.

The SC noted that when Sandun and others were taken to the District Medical Officer (DMO) in Meegahakiwula, the DMO had a private conversation with one of the police officers for about 30 minutes but had not inquired about any wounds on or assault of Sandun and others. The SC stated that the DMO had not fulfilled his obligation to the best of his ability and that he should have given more attention to the health of the Sandun and others.

The SC had also noted the claim by petitioners that the Passara Magistrate had not provided the lawyer of Sandun’s mother an opportunity to present her case as she had been constantly interrupted by the police officers (the same six who assaulted Sandun) when Sandun and others were presented before the Magistrate. The SC stated that the Magistrate should have exercised his/her due diligence in order to approach the situation in a better manner, considering Sandun and others were not in good health after the torture inflicted on them.

A 2020 report published by the Human Rights Commission of Sri Lanka (HRCSL)[iii] mentioned strong indications of collusion between Judicial Medical Officers (JMOs) and arresting officers in the narratives of the detainees they had interviewed. The HRCSL had been told of cases in which there was alleged interference by the police in the JMO examination and JMOs not asking questions about any ill treatment and concluding the examination within minutes. According to the report, some prisoners stated that when they were first produced before the Magistrate, although there were visible signs of ill treatment or even when they informed the Magistrate of the violence they had experienced, the judicial officer did not order them to be produced before a JMO, order an inquiry into the alleged ill treatment or ensure the person had access to medical care to treat the injuries. The HRCSL also observed that medical check up upon admission to prisons, which is mandatory according to the law, was not being conducted in some prisons due to the lack of facilities and lack of medical officers.

Days before this historic SC judgement, Melon Mabula alias Uru Juwa and Tharaka Wijesekera alias Kosgoda Tharaka died in police custody in two separate incidents within two days. This was despite prior representations made about their safety and social media reports about their situation hours before their deaths. Just after the first incident, and hours before the second incident (May 12 night), the President of the Bar Association of Sri Lanka (BASL) had personally requested the Inspector General of Police to ensure the safety of the person concerned by email, SMS and WhatsApp. One of the suspect’s lawyers had also written to the Inspector General of Police (IGP) and relevant police divisions on May 12 about death threats to his client[iv].

On May 17, 49 year old Mr. D. Sunil Indrajith, a father of three children, died when he had gone out to get food for the family (who had been quarantined) and he had informed the police and health officers prior to going out. An article by a prominent lawyer indicates two policeman had asked another man to beat Indrajith, and after Indrajith had fallen on the road, a bus ran over him. The two policeman are reported to have been arrested for neglecting duties.

On June 3, 22 year old Mr. Chandran Vidushan died in custody of the Eravur police in the Eastern Province. According to the Cause of Death form, he had died due to intoxication of methamphetamine, popularly known as ice but the form also mentions trivial injuries found on the body that are non-fatal. Media have reported statements by family alleging he was beaten with poles, was lifted and smashed on the floor by the police, suspecting that death may be due to police beating.

On June 6, 42 year old Mr. Mohamed Ali, a father of two children, died in custody of Panadura North police in the Western Province. According to the police spokesperson, he had been arrested for violating quarantine regulations and had jumped out of the police jeep. Two policemen are reported to have been arrested for negligence. His wife claimed that he had been beaten and killed by the police.

On May 13, in the aftermath of deaths of two persons in custody, the Executive Committee of the Bar Association of Sri Lanka (BASL) said that is was incomprehensible how the police failed on several occasions to protect unarmed suspects in their custody, expressed grave and serious concerns and strongly condemned the failure of the police, including the IGP, to protect persons in their custody[v]. On June 8, the HRCSL wrote to the IGP highlighting two deaths in custody on June 3 and 6 and demanding to a report about steps being taken to prevent such occurrences within five days[vi].

Sixteen prisoners have been reported to have been killed last year and over a hundred injured in five incidents in four prisons. Most were killed in violent response to COVID-19 related protests. Concerns that led to protests included overcrowding, non-separation of COVID-19 confirmed prisoners from other prisoners, restrictions on visitors and failure to provide alternative communication means with families and lawyers. Lack of nutritious food had become worse due to restrictions on visitors.

There have been around twelve suicides of prison inmates reported last year from about five prisons. Most appear to be persons who were suspected to have used or traded in drugs and/or illicit liquor. A senior prison official was quoted by the media as saying that they cannot be admitted to rehabilitation centers as they are on remand and not convicted inmates. But at least one who had committed suicide was reported to have been convicted. Another inmate is reported to have died by suicide in a prison hospital.

Towards justice and preventing deaths in custody

Another hidden tragedy in cases such as in Kandaketiya when perpetrators are sentenced to prolonged sentences and/or heavy fines is the fate of their children and families and crises they encounter emotionally, socially and financially. According to Sandun’s mother, although she has lost her son forever, she was saddened to hear about the six police personnel being sentenced to death. She is reported to have told media that “family members of the six cops were present that day and they wailed when the verdict was read out. There were around 30 family members, including small children. Though my son was killed, I am heartbroken because six families will become destitute. Now, the culprits must be regretting their actions”.

The state has a legal and ethical responsibility to ensure protection of those in their custody. But these incidents indicate that this responsibility is regularly violated. The responses of the IGP to the two letters from the HRCSL and progress made in investigations the HRCSL said they had undertaken are unknown. In many of the cases, justice seems very far and the prospects bleak.

The Kandaketiya police murder is among the small but growing number of cases where the determination and courage, against heavy odds, of survivors and victims’ families, activists and lawyers have led to some degree of justice for deaths in state custody and torture, cruel, inhuman and degrading treatment. Justice and accountability could have a deterrent effect on errant police and prison officials and encourage other responsible persons like Magistrates and medical officers to be more diligent. Structural reforms and more outrage against such incidents from society at large are also crucial in holding those accountable and preventing future incidents.