JVP and the Cost of Lost Revolution – Indrawansa de Silva 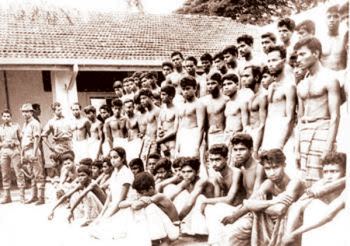 Fifty years ago, thousands of us took to arms in what we thought was the Marxist-Leninist revolution to capture power of the state overnight. That’s what our Dear Leader promised. We were made to believe that it was a well-thought out plan of action guided by field-tested Marxist theory. We had no doubt, especially in the early days, that our leader, Comrade Rohana Wijeweera, with his commanding knowledge of Marxist-Leninist Maoist ideology and an intimate knowledge of guerilla warfare fine-tuned by none other than Che Guevara, knew what he was talking about.

The fifth of the now legendary five “Classes” was fully devoted to the game plan of Lankan revolution. That Class was aptly titled “The path Lankan revolution should take.” It summed up all the Marxist revolutions that had taken place since the Bolsheviks toppled the Czar in 1917 and quite convincingly argued to slack-jawed audiences why none of the past revolutions could be a template to the “unique conditions” of the motherland. How original, we thought. So, it was our Dear Leader who dreamed up what the Lankan revolution would be: a simultaneous attack on the police stations and strategically selected Army camps. The entire attack would take a single night.

We know how that fateful night ended fifty years ago. All told, about five thousand youth died in their prime and more than twenty thousand of us were rounded up and corralled to overflowing prisons, subjected to every torture technique in the book plus new ones. We all remember the horrifying incident of the 20-year old beauty queen of Kataragama, Prema Manamperi, who was tortured overnight and paraded nude in broad daylight and summarily executed in full view of the public on April 17, 1971. That sadistic brutality was just the tip of the iceberg of torture that took place behind the closed doors. The very universities many of us attended were converted into makeshift prisons. Tens of thousands of families were destroyed, their homes torched and the impact of that naïve adventure is still raw. For those of us who took part in that uprising and for the country that was so scarred, an important question still remains: What, as a nation, have we learned?

Like many of my fellow comrades I was barely 17 years old when I was “hooked” – JVP terminology – to JVP. Everything I knew about Marxism, Leninism, Stalinism, Maoism and the glorious Cuban Revolution, I learned in my late teens from the clandestine classes and political camps as well as from the propaganda material quite generously handed out to us by the Soviet, Chinese and North Korean embassies. I was well schooled in revolutionary ideology. And the secrecy of every aspect of our revolution kept my adrenaline running high at all times. I was busy. Enlarging the maps of Colombo district, marking bridges to be blown up so we could immobilize the army, pinpointing where the counter revolutionaries, reactionaries and traitors reside so we could “take care” of them when we gained power. I even had my blue uniform made and waited for my tetanus shot. Ready to revolt. It was my drug of choice. We were different from the lumpen proletariat surrounding us. I, like all of us, did not smoke or drank. No relationships. Even personal hygiene such as bathing regularly, was looked down as petit bourgeois and unkempt hair was part of the trademark. (Only later did we come to know that most of these cultist taboos did not apply to our leaders.) Our devotion to the cause and the proletariat class made us feel unique and special. I “knew” I was right and anyone who questioned what we were espousing or even dared to suggest that we could be wrong was either a reactionary, a traitor or class-enemy. Branding the enemy came quite easily. Their number would be up very soon.

It is quite clear that we believed in violence from the outset. It was in our party’s DNA. We openly promoted the Marxist-Leninist-Maoist violent revolution in anticipation of proletariat dictatorship. We were in agreement with Mao when he said that political power grows out of the barrel of a gun. A revolution is an insurrection, an act of violence by which one class overthrows another. Our writings, classes, publications, posters and public speeches were very open about our belief in violence. Destruction must precede construction, whether it is imperialism, capitalism, feudalism or the State machinery. And if we were to kill en masse to reach our goal so be it. We didn’t shy away from saying how brutal we could be. One of our posters read: The liberation of the masses won’t come until the last capitalist is hanged from the last imperialist’s bowels! – JVP.

Incidentally, this was the time Mao’s Cultural Revolution was taking place in full throttle and I remember how approvingly we talked about that mass murder campaign. According to Mao successful revolution wouldn’t guarantee socialism and occasional cleansing of the party and the society from the reactionary and petit bourgeois mindset is a must. We were in total agreement with Mao on that. Absent cultural revolution a nation would end like Khrushchev’s Russia, revisionist! We celebrated Chairman Mao’s improvements to “scientific” Marxist-Leninist theory. It would take another decade for me to truly understand what a murderous enterprise Mao had launched as a cultural revolution. By then Communist China was in top gear towards capitalism and Deng Xiaoping was telling people that to get rich was glorious. A bit too late, Comrade Deng.

Violent and authoritarian tendencies of the JVP

What would Sri Lanka have been if the JVP had captured power in 1971? I am not sure about the JVP establishing a proletariat dictatorship, but I am quite sure about Wijeweera establishing a dictatorship. And because of that, like many of my fellow revolutionaries, I am glad that we did not succeed in 1971. I say this with a very heavy heart as thousands of courageous, caring and very patriotic youth died for this misguided “revolution.” Had we succeeded it is more than likely that Sri Lanka would have ended up worse than Cambodia under Pol Pot. I am not being just speculative here. The JVP has shown time after time its violent and authoritarian tendencies whenever and wherever it got even a small taste of power. Just take some early signs. If someone with an opposing view tried to sell a newspaper or distribute a pamphlet at our rallies they were promptly beaten up and kicked out. We did not hesitate to use power of the fist when met with opposition even within the organisation. Honest and sincere questioning of ideas and theories we espoused in our classes and camps was seen as a threat to the movement and branded as reactionary, counter-revolutionary, or petit bourgeois tendencies.

‘The Socialist Republic of Hammenheil’ – A precursor 89-90

The JVP is intolerant of challenge. I left the JVP in 1971 on principle, like many others, but we were always under its radar. In 1977, I was the President of the Students’ Council of Vidyodaya Campus and of the Inter-University Students’ Federation when Wijeweera was released from prison and held his first rally at the Hyde Park. He openly threatened me as we were a major challenge to the JVP on university campuses. The winds of terror were such that I left the country in the mid-1980s. There is not an iota of doubt in my mind that I would have been killed by the JVP, had I stayed. Looking back, the JVP’s talk about “centralised democracy” in theory is the biggest running joke. The JVP has proven that it doesn’t have a single democratic bone in its body.

The best example of how JVP would have governed comes from Hammenheil Prison in Jaffna, where hundreds of JVP cadres were held right after the uprising. In his excellent memoir, Tears of April (Bak Maha Kandulu), Ranjith Henayake Arachchi (Bertie) describes leading the attack on the Jaffna prison in an attempt to get Wijeweera rescued and its tragic consequences. He recounts how, in a remarkable show of courage and determination, the political prisoners in Hammenheil ended up winning some fundamental rights to take care of themselves inside the walls of the prison. In no time, Ranjith continues, the JVP equated that mutiny to a socialist revolution and claimed ownership of it. A “revolutionary army” was established to safeguard the “proletariat dictatorship” in Hammenheil that promptly took care of the “class-enemies” and “traitors” in the only way known to JVP––physical force. Anyone who questioned anything the JVP was up to was branded as the class enemy. According to Ranjith, those who cried for help when brutally beaten in broad daylight by the “revolutionary army” had only “shown their true colours as class-enemies.” Kangaroo courts (aka Peoples’ Court) were held in Hammenheil to try “reactionaries” and “counter-revolutionaries” whom the JVP always found guilty as charged with deadly consequences. Everything that took place in Hammenheil had the blessings of Wijeweera himself as there was an effective line of communication between Hammenheil and Jaffna prison where he was held. ‘The Socialist Republic of Hammenheil’ was a microcosm of what the country would have become had the JVP ever grabbed power.

Looking back, it appears that Sri Lanka has instinctively realised what JVP is: a brutal political entity. A wolf in sheep’s clothing. Underneath its flowery rhetoric of democracy, liberty, secularism and freedom of the press and speech, the JVP remains true to its origins fifty plus years ago. Its insatiable appetite for violence as a means to achieve power was vividly shown in the late 1980s. This may be the reason that JVP was never able to break the four-percent barrier – the percentage of votes it has consistently received since it entered parliamentary politics.

Over the past fifty years, the JVP had many opportunities to come clean of its sins but it hasn’t even tried to pretend it will do so. The JVP has done nothing wrong, the argument goes. All the carnage it created was the results of “reactionaries” “traitors” and the “class-enemies” who infiltrated the party to destroy it. At a forum in Europe, when faced with the question of atrocities committed during the so-called second uprising in the late 1980s, the current leader of JVP sought the cover of Mao’s rhetoric again: revolution is not a dinner party, he answered.

It is high time the JVP got its head out of the sand and face the jury of history. It owes that much to the thousands of youth still seeking its refuge for a political future.