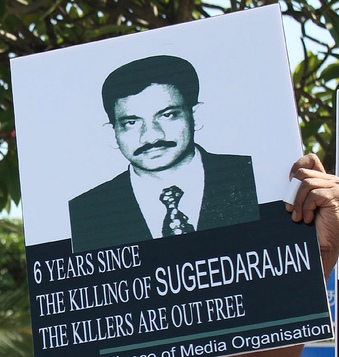 Ranga Jayasuriya
In the long list of assassinations, abductions and assaults of media personnel,  Subramaniam Sugirtharajan (35), a freelance journalist of  the Tamil newspaper Sudar Oli is  only a footnote. He was gunned down, while waiting in front of his residence in Trincomalee for a bus to go to work on 24 January 2006.  A father of two, he was an   employee of the Ports Authority.

But, three weeks before his death, he photographed the most conclusive evidence revealed that the five students of Trincomalee who were massacred on 2 January 2006 were, in fact,  shot in close range,  in the execution style.  The shocking pictures were published in the Jaffna-based Uthayan paper, and challenged the government’s version of the incident that the students were killed after an exchange of fire.

Three weeks after the pictures appeared, Sugirtharajan was dead. His killers were never caught, though many alleged the military had a hand in the killing.  His name was tucked away in a long list of unresolved killings, abductions, disappearance of media personnel, who made the supreme sacrifice for performing their duty.

The discourse of the attacks on  the media is habitually focused on the  high profile murder of Editor Lasantha Wickrematunge,  the abduction of Cartoonist, Prageeth Ekneligoda, the  periodic attacks on the Uthayan paper and the abduction and torture of journalist and media activist, Poddala Jayantha,and so forth.

In this long list, Sugirtharajan is a footnote. However, it was provincial journalists like him and media workers, who ensured the besieged Northern media industry would continue to function, who took the brunt of the violence.

They paid a heavy price for their commitment, idealism or simply being in the wrong place at the wrong time.

The preponderance of those victims is Tamil. And a sizable number of them are media workers, who contributed to the profession through means other than editorial work.  During the war in Jaffna, newspaper delivery men, who transported the bundle of the morning newspapers in the back of their motorcycles, had often been treading with death.

Delivery men such as Mariyadas Manojanraj,  Sathasivam Baskaran were killed while distributing newspapers in the Jaffna Peninsula and their ilk continue to be at the receiving end of  regular violence.

Both in the North and to a certain degree in the South, journalists were placed at the mercy of the belligerents of all sides.

On 28 May 2008, Paranirupasingham Devakumar,  Jaffna correspondent for the News First and Shakthi TV, was hacked to death,  allegedly by a group of  LTTE supporters,  who were enraged the journalist covered a rally of the Eelam’s People’s Democratic Party (EPDP), a  constituent party of the ruling United People’s Freedom Alliance (UPFA) . Devakumar acted against the wishes of the Tamil Tigers and paid the supreme sacrifice.  His killers are still at large and police suspended investigations, citing lack of evidence. No arrests were made.

Earlier, during the heydays of the peace process in 2004, the LTTE, which had been exploiting the restraint exercised by the military at the time embarked on a mission to eliminate the dissenting voices among Tamils.  The EPDP took the brunt of the killings; its senior members and local operatives were killed at an alarming rate.

On 16 August, 2004 The LTTE gunned down Kandasamy Aiyar, media secretary and senior member of the EPDP in Colombo.

After the split of the mainstream Tamil Tigers, the break-away Karuna faction led by Vinayagamoorthy Muralitharan alias Karuna, a minister of the present government joined the fray.

On  31 May, 2004 Aiyathurai Nadesan, a Tamil journalist attached to the Daily Virakesari, was shot by assailants believed to be of the Karuna faction in Batticaloa.

Dharmaratnam  Sivaram, the editor of the Tamilnet website was gunned down on 28 May, 2005, allegedly by the para-military operatives at the behest of the military intelligence.

Two PLOTE cadres were initially arrested by the police for the murder. One suspect known as Arumugam Sri Skandharajah alias Peter was indicted and the trial was re-initiated before a Sinhala speaking Jury in 2011, after a lapse of five years. The trial later grinded to a halt due to the absence of evidence.  The suspect was released on bail.

In most cases, where the culpability of the government and state military apparatus are suspected, the investigations tend to come to an abrupt halt.

Prageeth Ekneligoda, the cartoonist disappeared after he left the office, informing his colleagues he was going to meet a ‘contact’. He left the office on that fateful day, after receiving a telephone call from the ‘purported contact’  The Criminal Investigation Department (CID), which investigated the disappearance traced the last caller to his mobile phone in Batticaloa.  After the initial breakthrough, before the suspect was arrested, the CID investigations came to a grinding halt, which the inside sources confided was due to a political directive.

On occasions, even the courts become hollow in the search of justice when the state is alleged to be involved in the killings.

On 2 June, 2006, Sampath Lakmal, the freelance journalist, who was believed to have maintained a close relationship with the Army intelligence and had allegedly served as a military informant was killed after he left the house at night, after receiving a call from one Lieutenant ‘Kumar Sir’. Mother of the slain journalist, Rupa de Silva overheard him greeting the person at the other end as ‘Kumar Sir’ and it was later revealed he had met one Lieutenant Kumara. Later his bullet ridden body was found in Dehiwela. Despite the incriminating evidence, which was presented to the court by the mother of the slain journalist, no arrests were made.

The investigations into the most high profile murder of the recent times, that of Lasantha Wickrematunge, initially caused ripples within the military intelligence circles.  A group of military intelligence officials were held under close observation and confined to their barrack. The former Director of Military Intelligence Corp, Major General Amal Karunasena was recalled from Eritrea where he was sent to open a Sri Lankan mission in Asmara. Two suspects, Kandegedara Piyawansha, a former military intelligence officer  and Pichchai Jesudasan, an estate Tamil youth, were taken into custody after the initial investigations. Later, Piyawansa was released on bail after he made a statement in the Magistrate’s chamber. Requests made by the counsels appearing for late Wickrematunge to obtain a copy of the statement made by Piyawansa was denied due to the objections raised by the CID.

Later to make matters worse, Jesudasan died under suspicious circumstances while he was in jail on 15 October, 2011.

Even four years after his death, justice is yet to be delivered to the former newspaper editor.

And the victims of, violence unleashed against media, were made victims for a second time, of the entrenched culture of impunity, which has, in part, been fostered by the government.

Poddala Jayantha, who was abducted and tortured by his captors was targeted by a sinister campaign of personal vilification carried out by the spin doctors of the government and some of the least salubrious government ministers, such as Mervyn Silva, who boasted in a public rally that he ‘broke’ the legs of Poddala Jayantha and threatened to do so again,  should he ever return.

Journalists and media workers killed since 2006

3 May 2006:  On the International Press Freedom Day, gunmen raided the Uthayan newspaper in Jaffna, killing staff members, Suresh Kumar and Ranjith Kumar. The EPDP was blamed for the attack. No arrests were made.

2 June 2006: Sampath Lakmal Silva, a freelance journalist of the Sathdina newspaper was shot dead in the early hours of 2 July, 2006, and his body was found in Jayawardena Place, Dehiwela. He was 24 years old at the time of his death.

1 August 2006: Mariyadas Manojanraj,  a newspaper seller was killed in a bomb explosion, while travelling to his newspaper office in Jaffna.

16 August 2006: Sathasivam Baskaran,  a  delivery driver attached to the Uthayan newspaper was killed inside the delivery vehicle.

20 August 2006:  Sinnathamby Sivamaharajah, Managing Director of the Jaffna-based Tamil newspaper ‘Namathu Eelanadu’. He was shot dead inside his house, which was 300 metres inside the High Security Zone (HSZ) of the Sri Lanka Army (SLA) in Tellippalai in Jaffna on 20 August, 2006.  The newspaper was forced to shut down due to his demise.

15 February 2007: Subramaniyam Ramachandran, a reporter of Thinakural and Valampuri, was abducted by an unidentified group in Vadamarachchi in the Jaffna Peninsula and feared to be dead.

16 April 2007: Subash Chandraboas, 32, editor of a small Tamil-language monthly magazine, Nilam (The Ground), was shot dead in the evening near his home in Thoanikkal, near Vavuniya. His 8-year-old daughter told CPJ the assassins had spoken in Tamil and Sinhalese.

30 April 2007: Selvarajah Rajivarnam, young journalist of the ‘Uthayan’ daily, was shot dead by a motor cycle riding gunman at 10 a.m. on the Navalar Road.

28 May 2008: Paranirupasingham Devakumar, Jaffna district correspondent of News First and Shakthi TV  was  hacked to death in Navanthurei, on his way home from Jaffna town.

6 October 2008: Rashmi Mohamed, a journalist for Sirasa TV, was killed by a suicide bombing that targeted Major General Janaka Perera at the opening of a new United National Party office in Anuradhapura .

12 February 2009: Punniyamurthy Sathyamurthy, a journalist attached to the pro-LTTE Tamil net was killed during an air raid on Thevipuram, Mullaitivu in the Vanni