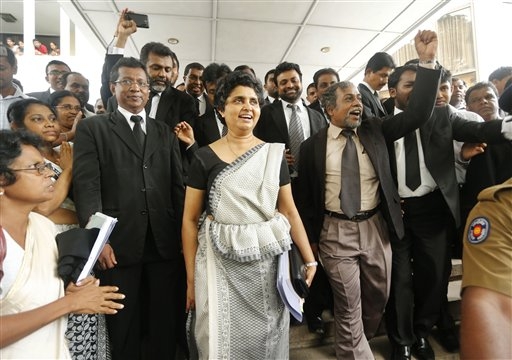 An Interview with Mandana Ismail Abeywickrema
Human rights lawyer and former head of Transparency International Sri Lanka, J. C. Weliamuna says the trial on the impeachment motion against Chief Justice Dr. Shirani Bandaranayake should be by an independent judiciary or tribunal. “We are following the Standing Orders rushed by J. R. Jayewardene to impeach Neville Samarakoon,” he said. Weliamuna noted that the judiciary was the last remaining institution that the executive could not control by a telephone call. “People need to come forward and stand to protect the judiciary. Otherwise there would be anarchy in the country,” he added.

Q: How do you view the current impeachment process?

A: This was an inevitable, but unfortunate clash. In countries where there are clashes between organs of state that is judiciary and executive or executive and parliament, they end up protecting liberties. That is how it is in developed democratic countries. Since Sri Lanka is not a working democracy any more we cannot definitely tell the outcome. But one thing is clear and that is the fact that the judiciary was the last remaining institution that the executive could not control by a telephone call. All others are under the executive. There are lots trying to say that there’s a clash between the parliament and judiciary, which is a myth. The parliament is not independent. It is controlled by the executive and is a subservient parliament.

In all countries there are two types of judiciary – the lower and higher courts. The legislature gets involved when there are accountability issues over the higher judiciary, but the executive does not control the legislature. However, here the executive controls the legislature. The inquiring committee has about six ministers. It is clear that the executive has hurriedly brought in the impeachment motion without being sure of the charges. It was brought in as a pressure tactic to get the Chief Justice to resign. Now, a select committee has been appointed to probe the allegations and they cannot be substantiated.

This is a politically motivated impeachment. The government is trying to show it is keen to clean the higher judiciary. If that is the case, there’s so much more the executive could have done.

Q: The Constitution makes provision for parliament to impeach the Chief Justice, but could the legislature be the accuser, judge, jury and the executor in terms of natural justice?

A: Not only a question of natural justice, but a constitutional issue. The Constitution states that courts could only exercise judicial power. What parliament is trying to do is to form a select committee to decide, which is a judicial function. Governing party members resolved to impeach the Chief Justice and a majority of them resolved to sign the motion. A majority of the select committee probing the motion are also those who had resolved to impeach the Chief Justice. Parliament therefore has now become the accuser and the judge. Choksy, who is now following the line of the government, says that judges should not head judges’ cases. In that case, can the accuser play the role of judge? There are specific tribunals to look into various cases. In the Indian parliament, they appoint a committee of ex judges and jurists to probe allegations against a member of a higher court. Malaysia and other Commonwealth countries also have a system of probing allegations against members of a higher court. There are so many best practices. Ours is the worst practice. We are following the Standing Orders rushed by J. R. Jayewardene to impeach Neville Samarakoon.

Q: Do you agree with the Chief Justice’s statement that parliament can impeach, but cannot carry out a trial and that it is up to a court of law?

A: Yes, the trial has to be by an independent judiciary or tribunal.

Q: What are your views on the petition filed before court against the PSC? Does it violate parliamentary privileges?

A: I completely disagree that parliamentary privileges are being violated as stated by the Speaker. In Sri Lanka, according to Article 35, you cannot take the executive president to court. The validity of law cannot be challenged by parliament. The Parliament Privileges Act of 1953 states that there shall be freedom of speech, debate and proceedings in the House and such won’t be liable to impeach or question by courts. Therefore, speeches made in parliament are not liable. These laws are to protect legislators in doing their own activities and to ensure that they don’t affect a third party. If parliament is trying to play the role of judiciary can it also form a labour tribunal and hear labour cases? This doesn’t prohibit the court in probing into the validity of a standing order. Article 125 of the Constitution says interpretation of it is only within the jurisdiction of the Supreme Court. Even the Speaker admits to it. The case is to interpret some fact. How can an interpretation be made without a case? There are two ways of getting an interpretation – one is to file a case and the second is for the President to seek an interpretation from the Supreme Court. In the event a party does not accept the jurisdiction, then the person should go before the relevant forum and say it. This is what the Chief Justice is doing; she would go before the forum and make her sentiments known. The Supreme Court has made a mature recommendation asking to hold the proceedings of the PSC. Parliament has no moral right to ignore it.

Q: A governing party member has also raised a privilege issue against Head of the BASL and parliamentarian Wijedasa Rajapaksa over the petition filed by the BASL before court. Do you feel that the legislature is trying to wrest control of the judiciary?

Q: The legislature has also entered the clash that started between the executive and the judiciary. How concerned are you?

A: Extremely concerned. When we read jurisprudence and political history there have been clashes, especially between the executive and the judiciary. But the judiciary was dragged in very rarely. Looking at the way the regime works, Sri Lanka is a popular undemocratic country. They would go to any extent a civilized nation would go to defeat the judiciary. This is why 210 judges expressed their support to the Chief Justice and walked out with her. My concern is that unless the government rectifies mistakes, there would be a head on clash. The executive needs to act maturely to avoid it, but I don’t see that happening.

Q: The clash between the executive and the judiciary commenced with the controversial statements issues by the JSC and the JSC headed by the Chief Justice’s denial to meet with the President and later on the verdict of the Divi Neguma Bill. Do you think that the clash could have been avoided?

A: It could have been avoided if the minister accused of attacking the Mannar Magistrate was dealt with. There was no precedence in the judicial history where the executive has summoned the JSC. The executive in the last six to seven years has been used to having chats and controlling. As for the media, the first was to attack and then to have breakfast meetings. They tried the same tactic here, however, it didn’t work with the Chief Justice. The Chief Justice has followed the best traditions of judiciary.

Q: What do you feel about the future of the judiciary?

A: Depends how strong they are to face this crisis. Either the judiciary could emerge victorious or succumb to the executive.

Q: Regarding the accusations relating to Kariyawasam, why did the Chief Justice allow her husband to take over such a position while she was the Chief Justice. Obviously it is a political appointment. How do you respond to that?

A: They made it very clear when he was appointed that judges’ family members should never accept political appointments. Unfortunately this had happened throughout, but this particular appointment was highlighted. Legally it is permissible and we have to restore some traditions so that the judiciary is not compromised. It was done to control the judiciary. But the Chief Justice did not succumb to that. She has faced this situation in a dignified manner and has set a good example to everyone.C