Judiciary is the latest victim of the dictatorial frenzy – JVP 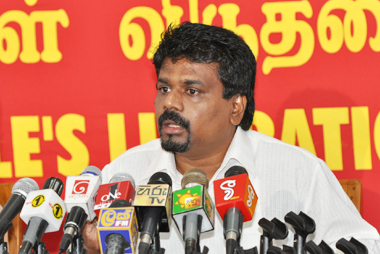 The latest victim of the dictatorial frenzy is the judiciary and his party is taking measures to rally all those who represent democracy including lawyers and other professionals to carry out a massive protest action says the Member of the Political Bureau of the JVP Parliamentarian Anura Dissanayake.

Speaking at a press conference held at the head office of the JVP at Pelawatta today (1st) Mr. Dissanayake said, “At the moment the executive is pressurizing the judiciary. We believe that we should inform the stand of the JVP regarding its latest developments. This government acts undemocratically in a dictatorial frenzy. The government follows a system that represses, removes and destroys all institutions and individuals that stand against its dictatorial frenzy.

Some time back media institutions that were an obstacle for the dictatorial frenzy were attacked and destroyed and journalists assaulted and chased out of the country. Several of them were murdered. Institutions and individuals were not allowed to carry on their normal procedures. The judiciary has become a serious victim of this process. The secretary to the Judiciary Service Commission Manjula Tillekeratne had issued an announcement that stated the JSC was being pressured by a higher up in the government. He also stated the situation was settled after explanations. He also stated that they were prepared to confront any pressure from outside and would protect independence of the judiciary. According to the constitution of the JSC the Secretary could only state decisions taken by the Commission. He has to act according to the JSC decisions. Hence, he is only an envoy of the JSC. Hence, it is the JSC that consists of the Chief Justice and Judges of the Supreme Court that revealed the pressure exerted to the JSC. However, it was the envoy that was attacked.

It is in 1978 constitution that J.R. Jayawardene made provisions for such an impeachment. When J.R. Jayawardene received a 5/6th majority in the Parliament and suffered from a dictatorial frenzy he also amended the Constitution according to his wishes. He included clause 107 to the constitution so that he could have a control over the judiciary. The clause states that an impeachment motion could be brought against the chief Justice only “on the ground of proved misbehavior or incapacity”. Many interpretations could be given to ‘misbehaviour’. The UNP, when it was in power, brought an impeachment motion against former Chief Justice Neville Samarakone. He had never been a judge. Mr. J.R. Jayawardene made him the Chief Justice to get his work done. However, he clashed with JR and an impeachment motion was brought against him due to a statement he had made. However, due to standing orders in Parliament the motion had to be withdrawn. JR was not able to get the impeachment again despite changing standing orders.

In history we have seen governments using clause 107 when they are unable to manipulate the judiciary. The present process too is such an attempt against the Chief Justice. The impeachment motion is entertained by the Speaker if it is signed by not less than 75 MPs and includes facts relevant to misbehavior. The charges are compiled by MPs. Once the motion is handed over a select committee of MPs is appointed. It is the MPs who make charges and also give the judgment. A report is compiled. This is debated by MPs. This shows that JR included clause 107 to the Constitution so that a government that has a majority in Parliament could remove the Chief Justice. Is this process democratic? Clause 107 included in the constitution by JR Jayawardene who suffered from dictatorial frenzy is being used today by Mahinda Rajapaksa who also suffers from the same dictatorial frenzy to tame the judiciary. This is not democracy, rationalness or honesty.

The main issue is that Rajapaksas are suffering from a psychopathy. It is the malady that they could do anything when they have power. Basil Rajapaksa thinks he is the Minister of Economic Development, he is the brother of Mahinda Rajapaksa and he could do anything. He thinks judiciary obstructed the ‘Divi Neguma’ bill brought to boost his political project. As such, Basil Rajapaksa, due to his psychopathy he is suffering from, thinks that the judiciary doesn’t act according to his whims and fancies. It is from there this conspiracy was hatched. This is not the stand point of ordinary SLFP members or its seniors. Most of the signatures have been obtained using arbitrary tactics. What is active here is the power fury of the family.

We do not accept the capitalist system. However, capitalist system has created three pillars of the legislature, the judiciary and the executive for the common existence of the society. The existence of a society depends on the checks and balances of these institutions. Rajapaksa family is carrying out the sledgehammer attack on the judiciary, one of those pillars. They have already repressed the legislature. As a result the society is deteriorating. The judiciary, they themselves referred to as supreme, is being hammered. Where will this end? Do you wait until you or your institution becomes a victim of this dictatorial frenzy? You have to decide whether you embrace it as you are scared of it or whether you are prepared to fight it. It is necessary to fight against this dictatorial frenzy. This process should not be allowed to go forward. What do they use the 2/3rd majority that has been manipulated in parliament for? The only law that has been adopted is the 18th amendment. It is not used for the benefit of ordinary masses. It is used to consolidate and propagate Rajapaksa family rule.

This should be opposed. The JVP will rally progressive forces including lawyers and other professionals to launch a massive protest campaign from next week. This dictatorial frenzy should be defeated. This dictatorial frenzy should not be allowed to repress any more individuals or institutions. This should be the aspiration of all of us. We ask masses in this country to rally for this noble cause.”

The Member of the Central Committee of the JVP and Colombo MMC Member Sunil Watagala was also present.