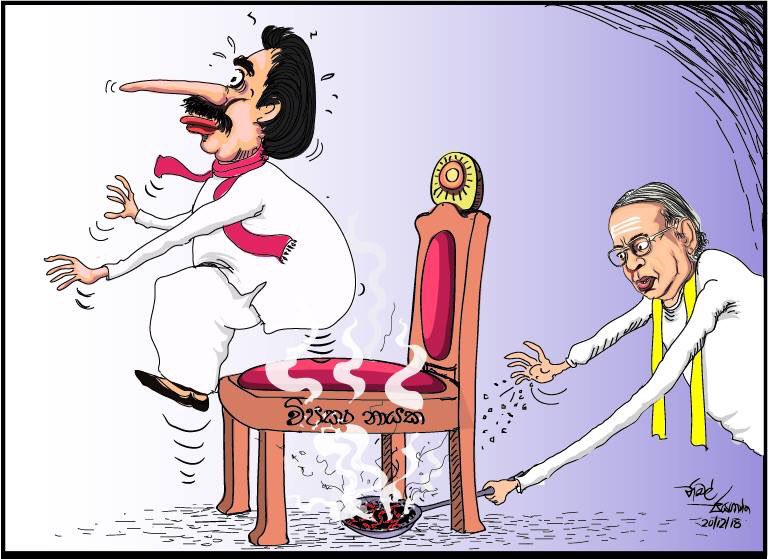 Speaker Karu Jayasuriya has made an initial announcement in parliament that the new Leader of the Opposition would be former president Mahinda Rajapaksa of the SLFP/UPFA.  However, this has been challenged by the TNA whose leader R Sampanthan previously held the position and who has not been removed from this position.  This has led to a situation where there are currently two Leaders of the Opposition similar to the situation of Sri Lanka having two Prime Ministers in the recent past!  The National Peace Council believes that the position of opposition leader cannot be ignored by those who are concerned with political morality and adherence to traditions, conventions and the rule of law

We note that President Sirisena holds three important cabinet ministries for himself, these being Defence, Mahaweli Development and Environment.  In addition, he has taken a fourth to himself, which is the former Ministry of Law and Order dealing with police and amalgamated it with the Defence Ministry.  By taking these ministries to himself President Sirisena has entrenched himself and SLFP/UPFA policies within the government.

It can also be seen that President Sirisena is actively participating in governance by vetoing ministerial appointments, appointing commissions of inquiry, and directing the Grama Shakthi development programme, among others.  The appointment of former president Rajapaksa who belongs to his party as opposition leader in this context is a contradiction in terms.  In these circumstances a legal question arises whether the SLFP/UPFA can, or ought to, be given the Leader of the Opposition’s position.

It appears that the idea of governance of many in the polity is to find loopholes in the law and use political power to get their way. This can be seen in the denial of Mr Rajapaksa and other SLFP/UPFA parliamentarians that they obtained membership of the SLPP.  They were publicly televised accepting such membership shortly after President Sirisena’s abortive dissolution of parliament on November 9 which was ruled as unconstitutional by the Supreme Court.  In legal terms verbal statements are taken as evidence of contract between parties and thus leaders ought to be bound by their statements for which they can be legally sued or made responsible.

The National Peace Council believes that the judiciary needs to be called on to look into the legal aspects of the conflict and ways of ending it. It is essential that politicians in general and leaders in politics in particular should be held accountable for the actions and assertions they make if the people are to have confidence in governance.  The judiciary seems to be the only institutional vehicle in the polity at the present time that can ensure this level of democratic accountability. Failure to do so will be tantamount to a denial of the aspirations of all Sri Lankans who wish to have a stable government at the dawn of another New Year.