Journalists Talk about Life in Exile 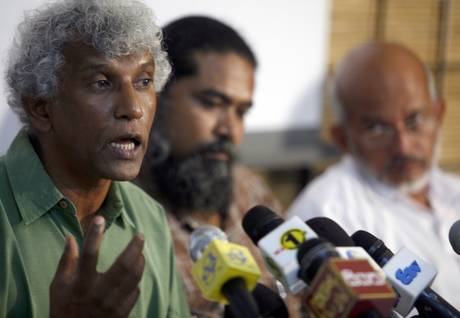 This excerpt was part of a speech that activist and now exiled journalist Sunanda Deshapriya gave in front of the UN Human Rights Council (UNHRC) during its special session on the deteriorating human rights and press freedom situation in Sri Lanka in late May 2009. The consequence of his words was almost immediate.

“I was branded a traitor to the nation by [the] highest authorities in the government for speaking at the Human Rights Council, and sections of the government even called for my death,” Deshapriya told IPI, explaining that for an activist such threats do not come unexpected. “I had [already] been under constant threat and intimidation since the escalating of the war in late 2006 because of my role in press freedom campaigns in the country.”

In 2009, after his speech in front of the UNHRC, a hate campaign was launched against him which eventually forced him to stay in Geneva.

Even though he already knew some people in Switzerland as a result of his human rights advocacy work, he admitted that he, too, had to go through the standard process of acquiring asylum, including a three-week stay in a refugee camp. His case was delayed several times, which Deshapriya explained was due to the fact that Switzerland makes no distinction between political asylum-seekers – like him – and asylum-seekers in general. Today, just over two years later, he is recognized as a legal refugee, enjoying the protection of his new home.

Accepting to live a life as a refugee might come with the benefit of safety and the opportunity to continue practicing journalism. However, there is also a cost.

“To become a refugee is not an easy option,” Deshapriya said. “It was one of the most difficult decisions I had to make in my life as an activist and I regret it every day.”

When he decided to stay in Geneva, he was already somewhat familiar with the way of life in Europe, and yet he pointed out that “integration is difficult, especially for those who do not speak French, German, or Italian.” If he had an option, he said he would have chosen South Asia as his home in exile.

For Myanmar journalist Soe Myint, founding member of the India-based information outlet Mizzima News, the choice to move into exile in another South Asian country was a logical one.

“Truly, I grew up in India politically,” Myint told IPI. “Generally, the people of India … support the democratic movement in Burma. “For me, India was a living school where I could learn a lot about Burma.”

Myint was a final-year university student when a nation-wide student-led uprising against the dictatorial government in Myanmar broke out in 1988. He was taking photographs of the protest for a magazine of the student union, he recalled, when he was detained by the military. A month later, he decided to leave the country and joined the political movement of the Myanmar students, during which time he started working as a journalist for different regional media, and as a stringer for several overseas Myanmar radio stations. In 1998, together with two other Myanmar activists in India, he founded Mizzima News.

“Refugee life in India is very tough,” Myint explained. “It is a daily struggle to survive – the survival to be able to function as an exiled Burmese journalist.”

India is not an exception in this respect. Dr. Abel Ugba, originally from Nigeria and currently the chairperson of the Exiled Journalists’ Network (EJN) in London, believes that refugee life can rarely be anything but a challenge. Some common social and cultural factors among countries might prove an advantage, he told IPI, but integration into mainstream society is never easy.

“Language can definitely make things easier,” he said. “If people speak the same or a similar language in both the journalists’ home- and exile country, this can certainly help. But that is only one of a few things.” Activism, he claims, can also play a role in speeding up the process of acquiring asylum status in the new country.

EJN was founded in 2005, and since then has been working to locate exiled journalists in the UK, bring them together, and provide them with a platform to share experiences and advice. As the organization focuses on the life of journalist-refugees in the UK, Ugba has brought up an issue that is considered a major problem for the exiles there.

“It takes a long time for the state to recognize the rights of refugees,” he explained. “And as long as journalists are not given the legal status of refugees, they cannot really do much in the country. They are usually in financial need; they do not have the right to education or any kind of intellectual work.”

And these are only some of the challenges exiled journalists have to face. For Deshapriya and Myint, however, there seemed to be another, perhaps even larger problem.

“Supporting one’s family in the home country while you are a refugee is also difficult,” Deshapriya pointed out. “I had to leave [mine] behind and have not seen them for 25 months now. We have had long deliberations … but we decided that the best option for them would be to stay in the home country.”

Myint, however, did not have the chance to deliberate his decision, and left without the knowledge of his family.

“I left for the border area on my own in 1988, leaving behind all my relatives and dear friends,” he said. “I did not tell them and [they] did not know whether I was dead or alive until some years later.”

According to Ugba, establishing the connections between exiles and their relatives is always hard. EJN is not directly involved in the so-called reunion of families, however, it does provide the support and advice necessary for refugees to become a legal resident as quickly as possible. “Once journalists acquire legal refugee status, it is easier for them to get their relatives to join them,” he pointed out.

EJN not only provides for the interaction of individuals facing exile, but also works towards reintroducing them to the profession of journalism. “We organize trainings in order to help the journalists who wish to reconnect with their profession in the future, be able to practice it in the UK,” Ugba said.

For many, going into exile is perhaps the only opportunity to continue practicing journalism.

“I have continued to write my articles and columns in Sri Lankan newspapers … I have published my weekly political column without interruption … and I maintain my own blogs as well,” Deshapriya said. “It is up to refugees themselves to keep their commitment to their profession.”

Both Deshapriya and Myint explain that they continue to be active human rights and press freedom advocates seeking to expand the democratization process in their home countries.

“Throughout these years, I along with many colleagues in Mizzima News have worked towards the directions of going back to our country one day to continue our work,” Myint added. “We are always ready to go back to a democratic Burma.”

To be able to go back to his home country, Sri Lanka, and be a journalist there once more is also Deshapriya’s ultimate goal. That, he said, is his “dream.
IPI