By: Frances Harrison
Today marks three years since the end of the fighting in Sri Lanka. I would like to mourn the dead but still I do not know how many. Estimates range from seven to 147,000. It is a shocking difference.  How is it possible in this world of satellites, rolling news and internet we have no idea how many human beings really perished, even rounded up to the nearest thousand?

It is because as journalists we have failed to get close to the truth. On one hand the Sri Lankan government says the 2009 war was a magnificent humanitarian rescue operation, while on the other many Tamils say it was a genocide. As reporters it is not enough to quote both extremes without digging a little deeper, but that is what the media reports in 2009 were like, citing army and rebel claims and just adding a proviso that these were unverified because journalists had no access to the war zone.

Perhaps that is why the media dubbed the Sri Lankan conflict “a war without witness”. That is simply not true. There were 60 Catholic priests and nuns, 240 local NGO workers, and Tamil civil servants working for the central government including five doctors. All of them were people who prided themselves on their professional integrity. Not to mention the survivors of this war, many of whom are now traumatised, suicidal, destroyed people, racked with guilt at being alive when so many around them died. Every emaciated person who walked out of those months of hell had a tale of narrowly missing death, of sitting chatting to someone one minute and seeing them dead the next. This is a story that has been largely missed, with the notable exception of Channel 4 news.

“No intrepid journalists smuggled their way into rebel territory as they did in Syria, even though an erratic bus service ran across the frontline until mid January 2009″Frances Harrison

There is little knowledge of the horror of those final months of war in a tiny patch of tropical, palm-fringed beach. It was a place where milk powder was more precious than gold, where women cut up their best silk wedding saris to make sandbags and children died hungry while an hour down the road the shops were full of food.

Numbed to the sight of death, families were forced to abandon the corpses of their loved ones as they ran for their lives. A brave doctor who saved thousands of lives is haunted by the memory of the 150 patients he abandoned under a tree on the last day of the war; he can no longer stand the sight of blood and does not want to be a surgeon. It was a place where loving parents discussed suicide with their children, unable to tolerate the agony of dying one by one. A medic saw a baby born with a bullet lodged in his tiny leg, shot while still in the womb. In the makeshift hospitals dying mothers screamed for their babies to give them one last feed – knowing the breast milk uld be their last gift of life. 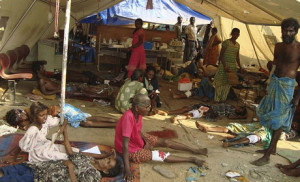 It was not just the indiscriminate government rockets fired from multi-barreled launchers into densely packed civilian refugee camps that caused untold suffering. At night in the bunkers women cursed and ranted against the Tamil Tiger rebels who stole their children. At first it was one child recruited from each family; in the final months they came back for the second and third children.

Parents buried their teenagers underground, hiding them in suffocatingly hot diesel cans with just a pipe to breathe through, hoping to evade the child-catchers. It was bad enough to lose your home and possessions, even worse to have your precious son or daughter taken away to die a pointless death in a jungle trench.

Three years on there is still no clarity about what really happened. The Tigers refused a credible Norwegian surrender plan with international supervision, which would have given amnesty to all but the two top rebels. It would have prevented all the torture, rape and disappearances after the end of the war. But the rebel leadership preferred to hold out for a humanitarian intervention that could have saved them as a political force. As a result they exposed their own people to more bloodshed at the hands of the Sri Lankan army when defeat was already guaranteed. It was an immoral and callous decision and it fed the cycle of revenge, ensuring the continuation of the struggle.

In Libya Colonel Gaddafi took his loyal bodyguards and fought to the death, but Velupillai Prabakharan, leader of the Tamil Tigers, took tens of thousands of exhausted but trusting Tamil civilians with him to the end. There is no public discussion of these choices in the Sri Lankan media, no questioning of what armed struggle really achieved, no acknowledgement of the assassination, extortion and child recruitment by the rebel leaders.

“Every journalist has heard of Srebrenica. But how many have heard of Mullivaikkal where just as many perished? “Frances Harrison

The evidence of war crimes and crimes against humanity by the Sri Lankan government has been independently documented by a United Nations inquiry that many journalists do not seem to have read in full.

For a long time the government claimed theirs was a “zero civilian casualty war” – a ridiculous assertion that was never properly challenged. Human rights groups documented more than 30 attacks on makeshift hospitals in six months. It is hard to believe they were all accidental.

Last night at a Frontline Club debate watched by 844,042 people live online, I heard a Sri Lankan MP in charge of reconciliation say the international Red Cross had praised the Sri Lankan army for its restraint. The same Red Cross publicly confirmed its staff had come under fire inside a hospital from positions held by the Sri Lankan military. When the fighting ended, the Red Cross said it had seen a lot of wars, but rarely one where civilians had been so badly affected. They called it an “unimaginable humanitarian catastrophe”.

Many Tamils blame the international community for abandoning them to die. It is true that the United Nations failed utterly in its duty of care. Those aid workers who spoke out were forced to leave the country. Record numbers of journalists were killed and exiled in a deliberate attempt to silence the truth.

But no intrepid journalists smuggled their way into rebel territory as they did in Syria, even though an erratic bus service ran across the front line until mid-January 2009. There were Scottish, Australian and Bangladeshi UN staff who witnessed war crimes at the start of the war, but their stories did not get out at the time. Journalists reported on British politicians wooing the Tamil vote in general elections but they failed to read a Swedish study that found the UK issued more arms-export licenses for Sri Lanka during 2001-2008 than any country in Europe.

At the time 400,000 Tamils were trapped in the war zone in Sri Lanka, international media attention was focused on Gaza where at most an estimated 1,500 died. A UN report now says reports of up to forty thousand civilian deaths in 2009 in Sri Lanka are credible. If that number is correct, then the defeat of the Tamil Tigers was one of the bloodiest conflicts so far this century. Every journalist has heard of Srebrenica. How many have heard of Mullivaikkal where just as many perished?

Frances HarrisonFrances Harrison is a former BBC correspondent in Sri Lanka and her book “Still Counting the Dead” which tells survivors’ stories from the 2009 war will be published in London by Portobello Books in July in e-book form and October in print.