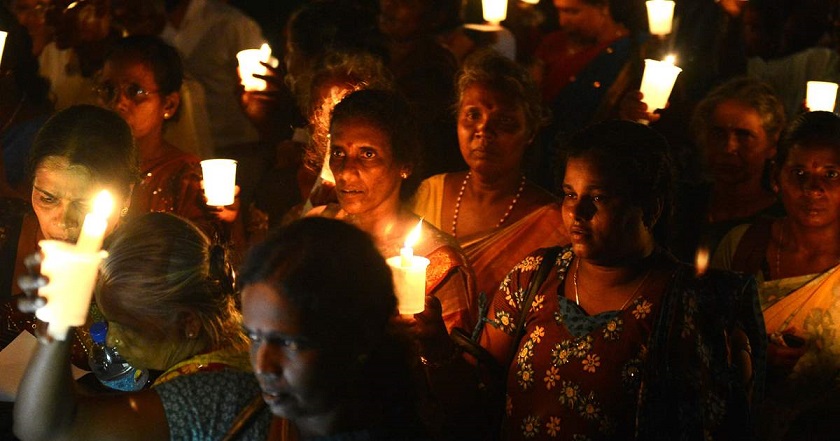 On March 26, 2020, President Gotabhaya Rajapaksa granted a presidential pardon and released convicted death row prisoner and mass murderer, former Army Staff Sergeant R. M. Sunil Rathnayake. While the country is on lockdown due to COVID-19, the President has seized this opportunity to deal a lethal blow to the rule of law to show that military perpetrators of heinous crimes will be given cover at the highest level despite the rulings of the Supreme Court the highest court in our land. In pardoning Ratnayake, the President has given his blessing to a cold-blooded killer who murdered a five-year-old child and seven other innocent civilians.

The story of the civilian murders in Mirusuvil goes back to twenty years – on December 19 2000, nine Tamils civilians – including three teenagers and a five-year old child – travelled from Udipiddy to Mirusuvil, a village 16 miles from Jaffna town, in the Northern Province of Sri Lanka. These persons were among those displaced from Mirusuvil due to the civil war who were resettled in a camp at Udupitty. Displaced family members used to obtain permission from the Sri Lankan Army to visit their homes. But on this day, those who visited their village never returned. It soon emerged that eight of the nine were killed by the Sri Lankan Army.

On December 24, 2000, one of the missing, recounted the incident and gave details about the whereabouts of the remaining eight. On his evidence when the police and the Magistrate went to the site there were no bodies except a skeleton of the animal in the toilet pit. After that when the Military – Police arrested the persons who were on duty in the area, Sergeant R.M. Sunil Rathnayake gave a statement to the Military Police stating that the bodies were removed from the toilet pit and buried somewhere else. Thereafter the Police and the Magistrate went to the site of the burial and exhumed the bodies. Four men and four children were found with throats slit and eyes blindfolded. Some corpses had their hands and legs chopped off.

Justice took more than a decade to wind its way but, against all odds, judgment was delivered at last. On June 24, 2015, former Army Sergeant R. M. Sunil Rathnayake who had been enlarged on bail pending trial was found guilty of murdering the eight civilians and was sentenced to death by the Trial at Bar consisting of three High Court Judges held in Colombo. On appeal against the said judgment a five – Judge bench of the Supreme Court of Sri Lanka unanimously affirmed the conviction and sentence on April 25, 2019.

[alert type=”success or warning or info or danger”]By granting the presidential pardon to Sergeant R.M. Sunil Rathnayake, power has been abused and justice has been forsaken. In a country where military perpetrators have rarely been held to account, leading ethnic distrust to fester into war, the President has granted a pardon to one of few men actually held accountable by our nation’s highest court. His pardon is a direct challenge to judicial independence and will result in the further erosion and loss of confidence in the Sri Lankan justice system among war-affected communities.[/alert]

For the four families directly affected, who have suffered from poverty and immeasurable personal loss, their small sliver of solace has been snatched away. When the sole surviving witness was previously visited by state intelligence officers soon after the presidential election, he expressed his apprehension that, he has no security or protection if the accused is released. Now that threat is real, and our laws and structures are hardly equipped to protect him.

It is a matter of regret and national tragedy that neither the state nor government authorities have over the years offered reparations or compensations to the families of the dead who have been deprived of their bread winners and are condemned to live in poverty for the rest of their lives.

Soon after the Presidential election, news media speculated that the Mirusuvil murderer was to be granted a presidential pardon and released. Affected families were terribly upset and lodged complaints before the Human Rights Commission in Jaffna and in the media. Right now, with the country in lock down, victims’ families are in no position to demonstrate their disapproval and distress. While pretending to save the country from COVID-19, the President is actually using his constitutional powers to fulfill his inflammatory electoral pledge to release “war heroes” from prison.

To put it in context, the country withdrew from its UNHRC commitments last month. The President declared that there are no disappeared persons, and those believed missing are all dead. His government has promoted suspected war criminals as head of operations in military sectors, and General Shavendra Silva is touted as a savior against COVID 19. The military is increasingly involved in all civilian activities. New roadblocks and checkpoints have been introduced solely in the Northern Province. And now a convicted mass murderer is pardoned and released by the President.

In perspective, the act of granting presidential pardon to a convicted criminal conveys the chilling message to the public that, irrespective of the gravity of the offence, offenders from the security forces will not be punished even if convicted by Court of Law and that any crime or violence committed against the ethnic communities will go unpunished. The security forces including the police already enjoying high degree of impunity will surely be further emboldened by the covert encouragement by the government to commit further atrocities against the hapless and vulnerable people. As organizations and individuals who are committed to the Rule of Law and to the protection of democratic values, we vehemently and unreservedly condemn the presidential pardon granted to Sergeant R.M. Sunil Rathnayake which said act will undoubtedly lead to further militarization of the society and contribute to disunity and distrust among communities in the country.