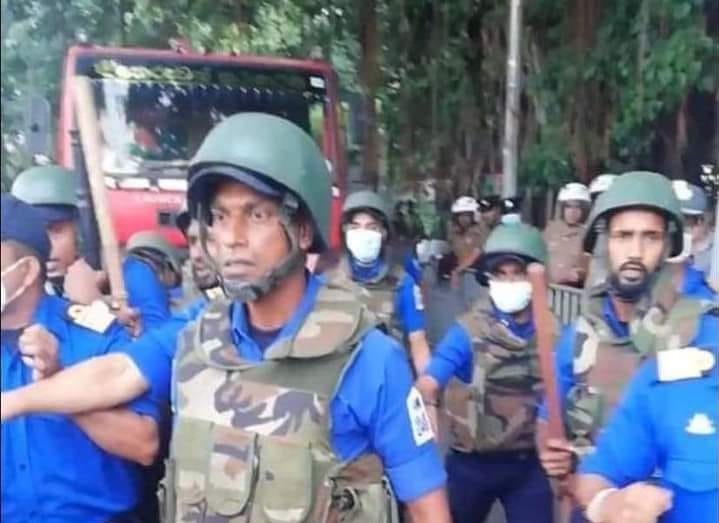 Five human rights organizations strongly condemned the brutal attack against unarmed peaceful protesters by Sri Lankan forces in Colombo in the early hours of 22 July 2022 . Since March 2022, thousands of people including human rights defenders, journalists, and members of civil society have been protesting peacefully across the country against the government’s mismanagement of the economy amid a deepening economic and financial crisis that has led to skyrocketing prices and shortages of fuel, food, and other basic necessities. On numerous occasions, the authorities responded with unnecessary and disproportionate force, arrest, misinformation, and threats against protesters, including human rights defenders.

The violence on 22 July 2022 occurred less than 24 hours after Prime Minister Ranil Wickremesinghe was sworn in as the country’s new President. Mr. Wickremesinghe succeeded Gotabaya Rajapaksa, who fled the country on 13 July and resigned a day later. The unnecessary and disproportionate force used against unarmed civilians is a clear violation of Sri Lanka’s human rights obligations under international law and is inconsistent with international human rights standards.

Protesters across the country have been peacefully demanding accountability, an end to corruption, and the abolition of the executive presidency, which protesters say it serves to centralize state power. Human rights defenders in the North and East of Sri Lanka have been demanding accountability for many years without redress. In recent days, protesters have also been calling for the resignation of Ranil Wickeremasinghe, widely believed to be an ally of his predecessor. Shortly after being sworn in as President, on 18 July, Ranil Wickremesinghe declared a State of Emergency in the country curtailing freedom of assembly and judicial safeguards of those arrested.

At around 1:30am on 22 July 2022, security forces including members of the Sri Lanka Army, Air Force, police, and the Special Task Force, surrounded the “Gota Go Gama” (GGG) protest site in Colombo which had been occupied by demonstrators for over a hundred days. Witness accounts and footage from the protest site revealed the extent of the violence used by security forces against the protesters, with some of them being beaten and dragged, while others pleaded for mercy. Nine protesters were arrested and granted bail on the same day. At least 14 protesters were hospitalized. Among those arrested was a well known human rights lawyer. Journalists, lawyers and human rights defenders including women, persons with disabilities, and members of the LGBTQ+ community were assaulted. Materials and electronic devices belonging to protesters were destroyed. Troops barricaded all entrances to the protest site and used violence and threats to prevent access to journalists, lawyers, human rights defenders, and medical personnel. The violence took place after the protesters had already announced their decision to peacefully handover the Presidential Secretariat building at 2 pm the same day to the government. This building had been occupied by protesters since 9 July 2022. The Bar Association of Sri Lanka and the Human Rights Commission of Sri Lanka have condemned the violence against protesters.

Reprisals, including through the use of force against peaceful protesters, have increased especially in response to the demonstrations. Human rights defenders and survivors in the North and East have long faced worse reprisals and violence with relatively less attention. In Colombo, on 9 May 2022, pro-government mobs attacked peaceful protesters in Colombo and at least 1,500 people were arrested in connection with the violence. On 9 July 2022, around 11 journalists were severely injured while covering the protests.

We are gravely concerned about the security forces’ violent crackdown on peaceful protests in Sri Lanka. We condemn the unnecessary and disproportionate use of force and call for an independent, impartial, and thorough inquiry into such actions and to hold those responsible accountable. and to release protesters who have been arrested.