Joint appeal to Diplomatic Community: Call on the Govt of Sri Lanka to stop repression and to release IUSF leaders 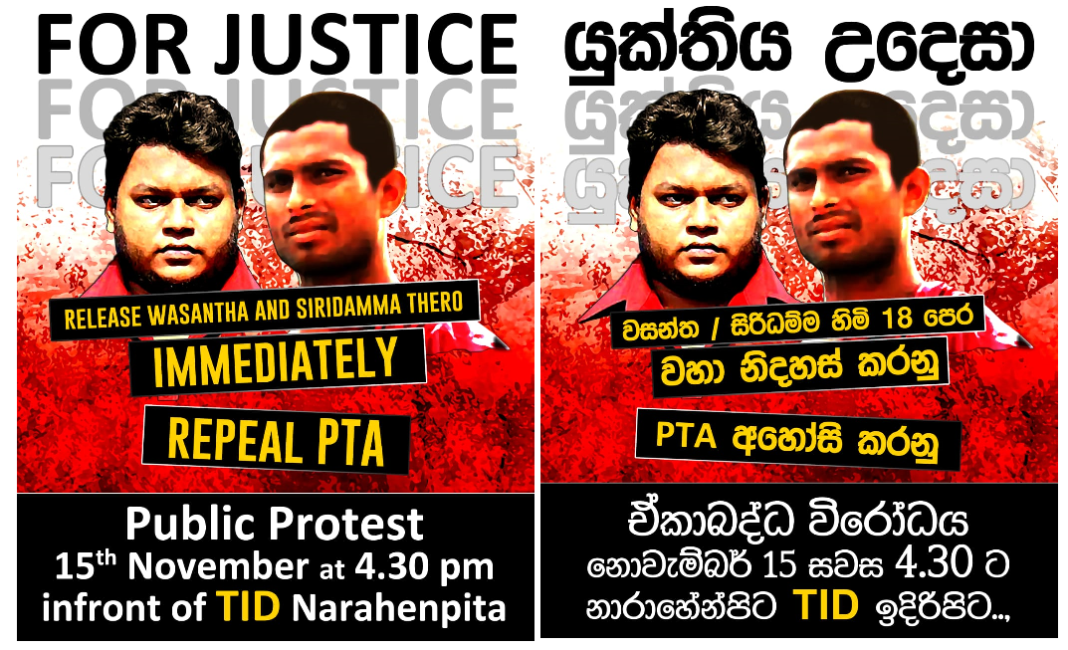 Re: Call on the GoSL to stop repression against peaceful protesters and unconditionally Release IUSF student leaders held under the Prevention of Terrorism Act

We, the undersigned civil society organisations, trade unions and human rights activists from Sri Lanka, unequivocally condemn the violent repression of dissent by the Sri Lankan State, and the blatant denial of the people’s freedoms of expression and association.

Sri Lankan authorities have responded to peaceful protests and legitimate demands for a responsible and accountable government, through violence and legal reprisals. We are concerned by the systematic use of force to disperse and punish protesters, and legal persecution, including arbitrary arrest and detention as a form of reprisal. We are especially alarmed by the use of anti-terror law – the draconian Prevention of Terrorism Act (PTA) against protesters, despite assurances to the international community of a moratorium on its use.  Wasantha Mudalige, the  Convenor of the Inter University Student Federation (IUSF) and Ven. Galwewa Siridhamma, Convenor of the Inter University Bhikku  Federation (IUBF) have been detained for almost 90 days without charge and recourse to bail under the PTA.  Families and lawyers of the detained students have repeatedly raised concerns regarding their inhumane detention conditions, which are unsanitary, unsafe and have impacted their health. Young student activist of the IUSF, Hashan Jeewantha, who was arrested along with Mudalige and Ven. Siridhamma on 18 August, 2022, was unconditionally released on 07 October (having spent 50 days in detention,) without any charges against him.

United Nations special procedures including the mandates on Freedom of Expression, Human Rights Defenders, and international human rights organisations, in responding to the State of repression on protesters and the shrinking civic space in the country.

We appreciate your  support in demanding for the immediate release of Wasantha Mudalige and Ven. Galwewa Siridhamma, by the Government of Sri Lanka, prior to the expiry of their detention orders on 18 November, 2022. We call on the international community to ensure an end to this targeted persecution of student leaders and activists, and that there be no extension to their  90 day detention order under the PTA.

We maintain that all engagement with Sri Lanka must be based on clear and transparent human rights benchmarks – this includes trade and financial engagement in order to ensure real transformation and prevent recurrence.

The IUSF, along with trade unions, professionals and civil society groups, have made a crucial contribution to the recent peoples’ uprising that forced the previous President, the Prime Minister and the Minister of Finance to resign from their positions. With the high inflation and deepening economic crisis, people have been continuously protesting over the unbearable rise in the price of goods and services, bad governance, corruption and a lack of State accountability. Protesters are also calling for an immediate end to State repression which has escalated under the Presidency of Ranil Wickremesinghe. Protesters have been able to garner the support of the international community, who played a vital role in ensuring pressure on the Government of Sri Lanka, for its conduct leading to the economic crisis, but also on reprisals against peaceful dissent. We appreciate the oversight and engagement of the diplomatic community, United Nations special procedures including the mandates on Freedom of Expression, Human Rights Defenders, and international human rights organisations, in responding to the State of repression on protesters and the shrinking civic space in the country. In this light, we believe that your support in strengthening the voice of the protesters in demanding the release of student leaders, Wasantha Mudalige and Ven. Siridhamma himi, is crucial to fulfilling the people’s expectations to preserve democratic values. We also would like to reiterate that even though that certain parties in the international community hold the favourable disposition towards President Wickremesinghe and his proposed plan to resolve the current economic crisis, his unscrupulous schemes to suppress public protests, restrict peoples’ freedoms of expression and association should never be condoned.

In a time of economic, social and political crisis, we are further concerned that the Government’s actions against its people will hinder the GSP+ concession which is up for review next year. We maintain that all engagement with Sri Lanka must be based on clear and transparent human rights benchmarks – this includes trade and financial engagement in order to ensure real transformation and prevent recurrence. Government attempts to label and criminalize citizen protests through mis/dis information, and to shift the blame for the imminent loss of the GSP+ on protesters and ordinary citizens, is disingenuous and must not be accepted. The Government must accept and withdraw its repressive mandate, impunity and corruption, which has led to the economic crisis.

We, as civil society organisations, continue to advocate for the repeal of the PTA in any form, which is being used now 13 years after the end of the war. We believe that this draconian law has been deliberately misused to violate the rights and freedoms of the people of Sri Lanka, particularly to repress the Tamil and Muslim minorities and curtail dissent, specifically the voices that may be critical against the government. According to the Terrorism Investigation Division (TID), there are 127 detainees in total, detained under the PTA to date, and a further 11 persons have died in custody.[1]

Therefore, we call on Your Excellency, to support our struggle to protect rights and freedoms in Sri Lanka.  Your support is an important contribution to the work being done on the ground by civil society, student movements, unions and ordinary citizens. We further request your support in calling on the Government of Sri Lanka to immediately end suppression on the fundamental rights of Sri Lankans, and all forms of harassment and intimidation against protesters, the release of those detained under the PTA as well as the repeal of this draconian law.

[1] Terrorist Investigation Division of Police, Sri Lanka has released the information of the total number detained under PTA, https://twitter.com/ambikasat/status/1589831742181249024?t=ozgt2SMqAs9oDHVhPmjP_g&s=19