Jayalalithaa looks forward to improved ties with Centre under Modi; calls on to take action on Sri Lanka 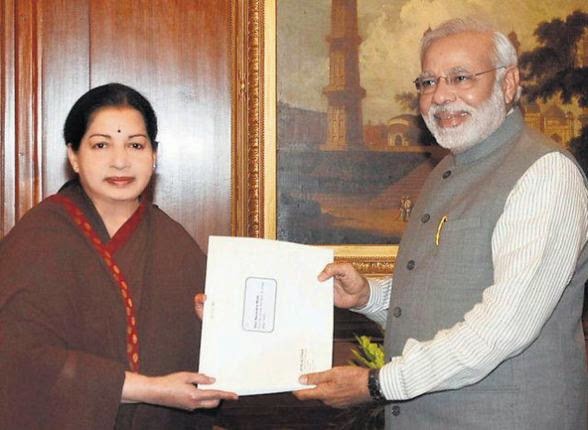 While ruling out the entry of the All India Anna Dravida Munnetra Kazhagam into the National Democratic Alliance, party chief and Tamil Nadu Chief Minister Jayalalithaa on Tuesday kept the door open for support to the Narendra Modi government in the Rajya Sabha, where the alliance does not have the numbers to ensure passage of Bills. After a 50-minute meeting with the Prime Minister, she said the need for a formal association with the NDA did not arise as the alliance had the majority in the Lok Sabha. Asked about the possibility of her party helping the government pass Bills in the Rajya Sabha, she replied: “We will see if that need arises.”
Read the  memorandum
The NDA has only 64 members in the 245-member House and requires the support of parties such as the AIADMK, which at present has 10 members.
Ms. Jayalalithaa, meeting the Prime Minister for the first time after he assumed office, submitted a 64-page memorandum listing various concerns of the State.
In her memorandum, Ms. Jayalalithaa urged Mr. Modi to initiate expeditious measures to form the Cauvery Management Board.
On the Mullaperiyar issue, she called upon the Centre to nominate a representative from the Central Water Commission and constitute the three-member Supervisory Committee to help raise the water level in the dam to 142 feet.
She wanted India to move the U.N. for a referendum among the Tamil diaspora for the formation of a separate Eelam.
The Centre could release the Rs. 1,576.87-crore shortfall in release of grants-in-aid due to Tamil Nadu over the years. “We were systematically ignored and discriminated against by the previous UPA government,” Ms. Jayalalithaa noted in a letter accompanying the memorandum.
She said she looked forward to that trend “completely changing under your guidance.” She sought Mr. Modi’s critical intervention and financial support in the infrastructure sector.
Ms. Jayalalithaa called on Union Finance Minister Arun Jaitley and discussed financial issues.
Earlier in the day, she met President Pranab Mukherjee.
The Hindu
Share
Facebook
Twitter
WhatsApp
Pinterest
Email