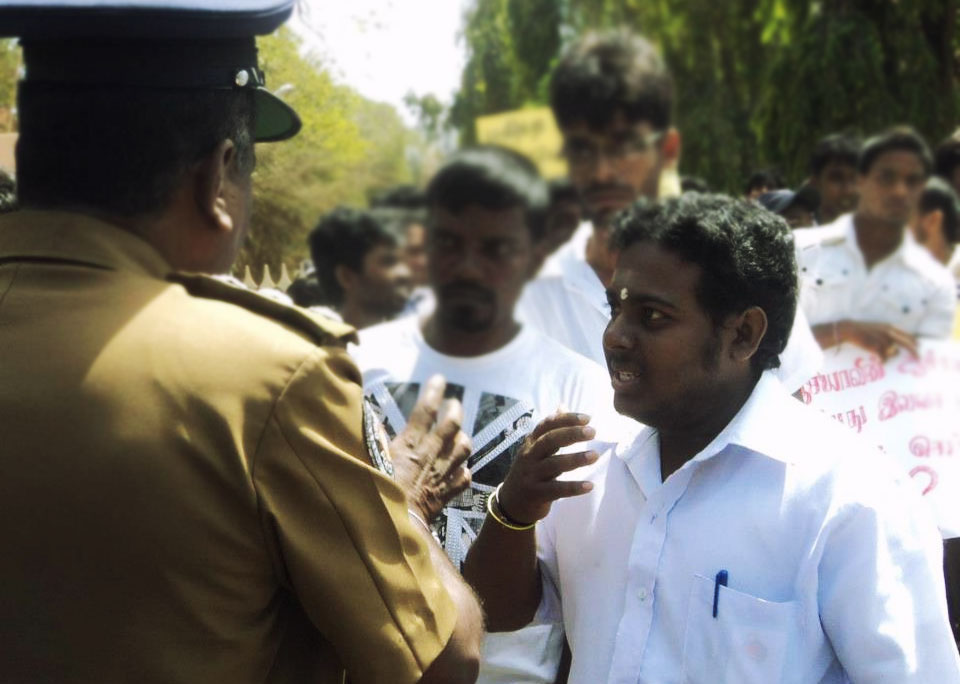 Stepping up their terror campaign against the Jaffna students’ society, Sri Lankan police on Saturday (01) has arrested four Jaffna University Students, including its union leader P. Darshananth and his colleague, in a midnight raid.
According to media sources in Jaffna, a four-member team in police uniform has raided the house of the 24-year old Darshananth in the early hours of Saturday and taken him and another Medical Faculty student to the Jaffna police station, claiming to record a statement from them.
The wailing mother of Darshananth has said that the police team has not given the family any documents relating to his arrest.
In a separate incident, two more Jaffna university students were arrested when they turned up at the nearby Kopay police station on request, along with the Acting Vice Chancellor, Prof. Velnamby.
Prof. Velnamby has said that on the request of the Kopay Police, he took Arts Faculty Union leader K. Janamegan and Science Faculty student S.Solomon to the police station where they were kept and interrogated.
TID takes over
Former Jaffna district parliamentarian and leader of the Tamil National People’s Front (TNPF) Gajendrakumar Ponnambalam told the JDS that all four university students have now been transferred to Colombo and the Terrorism Investigation Department (TID) had taken over the investigation.
“We have requested the key diplomatic missions in Colombo to immediately intervene and ensure the safety of these students. The TID taking over the investigation is a matter of grave concern,” he said.
He said the Tamil political forces have decided to launch a massive protest rally in the next few days in Jaffna to condemn Colombo’s all-out campaign against the University students just for commemorating their heroes and lighting the commemoration lamp despite many threats and intimidation.
Continuous intimidation
The midnight arrest of the Students’ leader and three others have come barely a couple days after the police and the army unleashed a violent attack on a peaceful march by the university students, wounding seven of them on November 28.
The university students conducted a protest march condemning the previous day military raid on the university ladies hostels. Jaffna Newspaper editor and a Jaffna district Tamil parliamentarian were assaulted by the police in uniform and the state intelligence personnel in civvies for covering the raid on the ladies hostels on November 27.
Academic sources of the University of Jaffna said on Saturday that the students from the university hostels have started leaving their hostels for safety reasons.
Boycott campaign
“The university students who boycotted their classes in protest of the attack for the past two days have now decided to continue their boycott campaign with the arrest of four fellow students. They students have demanded the University Administration to ensure the safety and integrity of the University, instead of allowing the military to run the show at their will,” he told the JDS via phone from Jaffna.
Meanwhile, the US embassy issuing a statement, said “the November 28 beating of a reporter in Jaffna, harassment by Government of Sri Lanka officials of independent media outlets, and searches without warrants of journalists all serve to stifle media freedom.”
“We call upon authorities to exercise restraint and respect peaceful demonstrations,” the embassy further said.
JDS
Share
Facebook
Twitter
Pinterest
WhatsApp