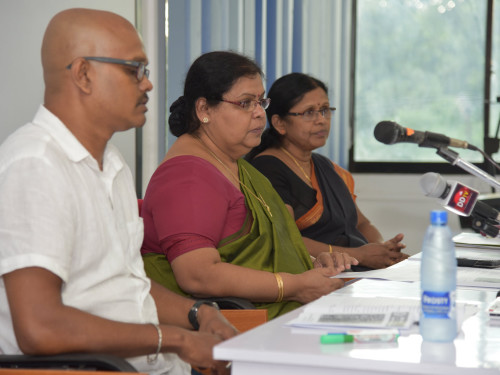 ( Vice Chancellor of the University of Jaffna speaking about the students clash; photo: jfn.ac.lk)

Urging the government to take urgent action to bring about reconciliation between Sinhala and Tamil people, especially in the Northern Province, university teachers and several civil organisations yesterday condemned the attack on Sinhala students in the Science Faculty of the Jaffna University.

Addressing the media at the Centre for Society and Religion (CSR) in Maradana, they said some politicians in the South used the incident to project their political image like the extremists groups in the North.

Senior lecturer in the Colombo University and former President of the Federation of University Teachers’ Associations (FUTA) Dr. Nirmal Ranjith Dewasiri said it was not an isolated incident, but the relations between Sinhala and Tamil students in the university had been strained.

He said Sinhala students had formed a Sinhala Student Association and as more students from the south had been sent to the Jaffna University since 2010 and 60% of the undergraduates in the Science Faculty was Sinhala. “Unfortunately,

Tamil students as well as Jaffna people thought it was part of a conspiracy.”

However, the senior lecturer said the Teachers Association of the Jaffna University as well as Science Faculty Teachers’ Association condemned the incident.

He said the Saturday’s incident in the Jaffna University once again proved that need for reconciliation.

National Organiser of the Socialist Youth Union (SYU) Eranga Gunasekera said the entire Tamil community did not condone such incidents, but such incidents stood extremists in good stead.

Lecturer of the University of Visual and Performing Arts Dr Samumya Liyanage said universities were working for reconciliation, despite such incidents reported from time to time.

He said they had earlier staged cultural programmes at the Eastern University as well as the Jaffna University without any problem.

Dr. Liyanage said a group of Sinhala students had attacked a Sinhala drama troupe at the Peradeniya University recently.

Lecturer of the University of Visual and Performing Arts Asela Rangadewa said the previous government had failed to take measures to bring about reconciliation. “This government, too, has failed to actively implement the reconciliation as they promised.”

Attorney–at–law Namal Rajapaksha said the government had set up a new ministry for national dialogue as a step to reconciliation, but that ministry has had not done enough so far.