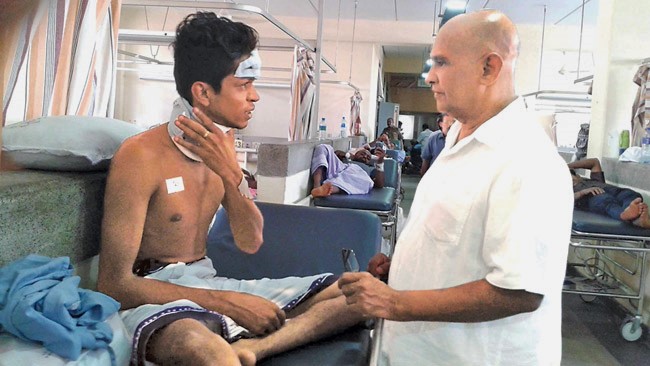 The students involved in the brawl at the Jaffna University on Saturday, will be dealt firmly under the law, University Grants Commission (UGC) Chairman Prof. Mohan de Silva said.

Speaking to the Daily News yesterday, he said the Police crime inquiry into the incident has been commenced by the Jaffna DIG, while the Vice Chancellor of the Jaffna University has been instructed to commence a preliminarily inquiry to take disciplinary action against the students involved in the fight.

“We have the video clips of the incident. A fight is a crime despite whether it happens inside or outside the university premises. Action will be taken against those involved in the clash as per the video evidences,” he noted.

Prof. de Silva said the President and the Prime Minister had been briefed about the incident, adding that Higher Education Minister Lakshman Kiriella, who was in Singapore, had been in constant touch with him.

The chairman said he would meet the minister at his residence soon after his return yesterday.

“In addition, I had been in touch with the Ministry Secretary and the Secretary to the President as well. We will submit a report in this regard to the PM through the subject minister once we receive information from the Jaffna VC,” he said.

Prof. de Silva said a few Arts Faculty students had triggered the clash. “The fight took place between two groups of students during a procession to welcome the freshers to the Science Faculty. The university was closed on Saturday.

The security was given to the students and some of them were sent back to Colombo.

The anti-riot squad was called in and Jaffna Commander Major General Mahesh Senanayake assisted the university management in controlling the situation.

The students’ hostels and private boarding places were given police security,” he said.

The chairman said one student who had been attacked by a helmet had been brought to the Colombo National Hospital with a forehead injury, adding that he personally looked into the condition of the student.

“I contacted his parents. He is okay and will not need to undergo surgery. Apart from that, four girls had been injured while running. They had obtained treatment and left,” he said.

Prof. de Silva said the university is most likely to be opened on Wednesday, after observing the situation today and tomorrow.

He added a meeting between the Student Union and the Vice Chancellor along with the university management has been called at the university premises yesterday.

“There is no issue between the Sinhala and Tamil students in the university, but there are a few who provoke such incidents. As it happened we were worried about the situation in other universities, and I personally spoke to the VCs of Ruhuna, Peradeniya, Kelaniya, Sri Jayewardenapura and Colombo asking them to be alert,” he said.

Prof. de Silva said all the seven Commissioners of the UGC are scheduled to visit the Jaffna University next Friday. “The visit was planned before this incident took place,” he said.

The chairman also said the Jaffna Commander has taken measures to conduct a special TV programme on a popular channel in Jaffna with the participation of a few intellectuals to raise public awareness on the detrimental impact of such incidents.

The Jaffna University and the Vavuniya Campus have been granted a holiday today following a clash between two student factions on Saturday.