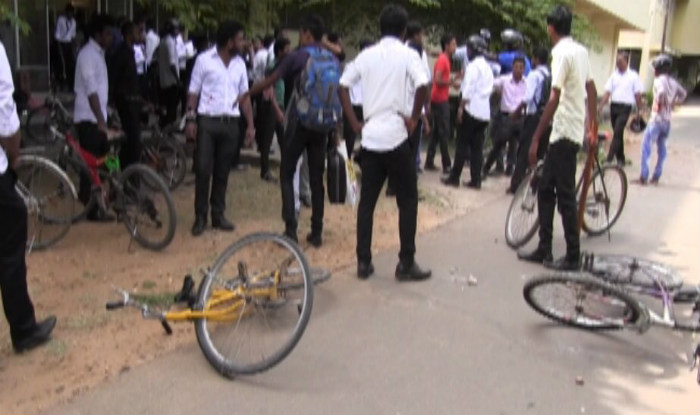 The Federation of University Teachers’ Associations (FUTA) yesterday urged the university authorities to take all possible steps to identify the perpetrators of violence in the Science Faculty of the Jaffna University on Saturday and to bring them to justice.

FUTA President Dr. Rangika Halwathura said, in a statement, that they condemned the attack.

“We do not accept or endorse any form of violence including student clashes within universities,” he said.

Dr. Halwathura however said the FUTA had noticed that there had been such occurrences in the recent past.

FUTA attributes them to the negative ramifications of the prevailing system creating a culture of violence which affected the quality of education in Sri Lanka.

The senior lecturer said the university teachers believed that a constructive, long standing dialogue should be created among authorities, academics and students to eradicate all forms of violence which existed in Sri Lankan universities.

Dr. Halwathura said FUTA also vehemently condemned the attempts of certain individuals to misuse the situation for their personal and political gains and re-direct the country towards disaster.

All Sri Lankans had been unfortunate victims of brutality, ethnic conflicts and violence for nearly four decades and they did not expect such in the future, he said. “Therefore, we urge the university community and the entire citizenry to be vigilant and stand united against all forms of racism to ensure harmony,” he said.

FUTA strongly believed that such situations could only be addressed through open, positive and constructive discourses which would lead to understanding among varied communities, he said.

“We offer our unconditional support for such dialogues and ushering in harmony within the University of Jaffna,” Dr Halwathura added.