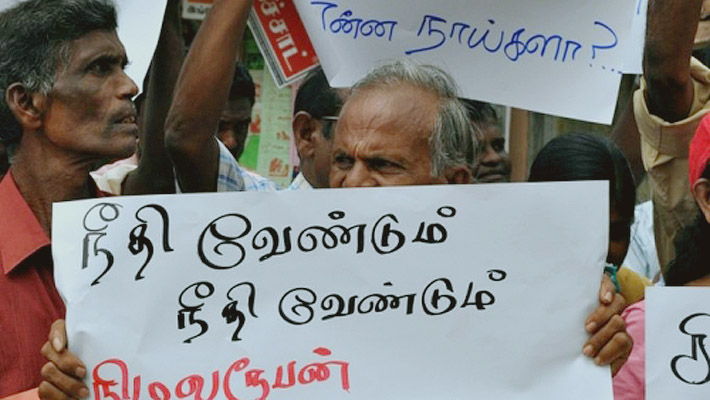 A peaceful protest held with the participation of Tamil political and social activists in Jaffna was disrupted on Wednesday (18) by men believed to be working for Sri Lanka’s Military Intelligence (MI).

Those taking part in the protest action, which had been called by the Tamil National Peoples’ Front (TNPF), were harassed in the presence of Sri Lankan Police and Army troops in Nelliyadi,  25km northeast of Jaffna city. The action was organized to condemn the recent killing of a Tamil political prisoner and to mark their protest  against the increasing attacks on political activists in Jaffna.

Court refuses
Prior to the protest, the organizers have reportedly received threats from the security forces and paramilitary operatives, who had warned against going ahead with the planned action. On Tuesday, the police tried to obtain a court order to prevent the protest action, but the request was turned down by the Magistrate of Point Pedro, who instead ordered that the police should provide security to the protesters. 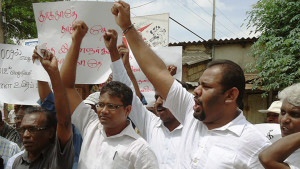 “Four men, who wore masks came in two motorbikes and waved the Tiger flags in front of the protestors. The army and policemen from Nelliyadi, Valveddiththu’rai and Point Pedro divisions were present, but did nothing to remove the disrupting elements from the scene” the General Secretary of the TNPF, Selvarajah Kajendren, told JDS.

“The registration number of one of the motor bikes was TR – 8752 though we could not identify the province” he further said.

Speaking to JDS, Gajendrakumar Ponnambalam, the leader of TNPF said that the party has already taken steps to lodge a complain at the Nelliyadi Police station. 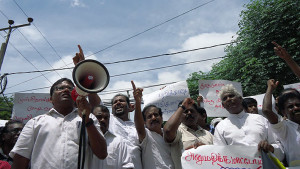 “The true intention of the intimidators was not only to disturb today’s protest , but to discourage future protests as well” he said.

A similar incident had been reported two months previouslye when two men displayed the LTTE  flags at the May day rally held in Jaffna city organized by the opposition United National Party (UNP) and the Tamil National Alliance (TNA). The parties alleged that the incident had been stage managed in order to sling mud at the opposition.
by Nirmanusan Balasundaram
© JDS