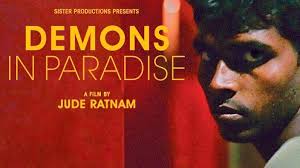 Demons in Paradise, a film directed by Jude Ratnam, has been removed arbitrarily from the Jaffna international film festival.

Writing a letter to Anoma Rajakaruna, the festival Director, Ratnam says Dr. S. Raguram, the festival committee chair, has insisted him to remove the film.

It is learnt that the film has been removed as it positions the LTTE in a negative light.

The film was expected to be screened at the festival on October 05 at 06. 45 pm.

“The sudden removal of the film from the schedule and the festival’s decision not to screen the film comes as a surprise to me, heeding to pressure from a group so far identified as the ‘community’. ” Ratnam says in his letter.

The director describes the removal as an infringement on his fundamental rights and the freedom of expression.