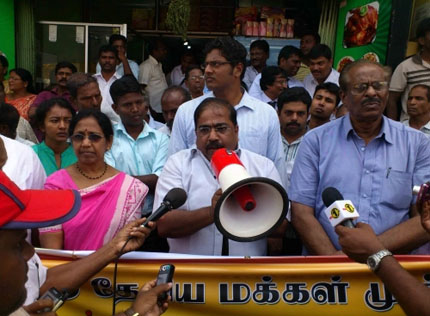 In an impressive show of solidarity on Tuesday, the TNPF-called demonstration in Jaffna condemning the attack on Jaffna university students and the arrest of student leaders by the occupying forces of Sri Lanka, was actively participated by the mainstream TNA, University Teachers Association, University Students Union, Jaffna Chamber of Commerce, Medical Association, Lawyers Association and other civil society organisations, besides progressive leftist party representatives from the South. The demonstrators demanded the IC to immediately recognize the nation, territoriality and right of self-determination of Tamils in order to ensure their safety and democratic rights.
Questioning the trustworthiness of the IC, the demonstrators appealed to Tamil youth in the diaspora and in Tamil Nadu to take up continued agitations to the edification of the IC.

The occupying Sri Lankan military beefed up its deployment threatening the participants of the peaceful demonstration. The intelligence operatives of the SL military were also taking photos and video recordings of those who attended the protest.

The demonstration took place for nearly one-and-a-half hours from 11:00 a.m., in front of the Central Bus Stand of Jaffna.

There was heavy deployment of SL forces at the vicinity. SL military vehicles were running to and fro and the atmosphere was tensive.

The SL military intelligence was in fact vying with media in photographing and video documenting the particiapants of the demonstration.

The demonstrators decided to send a joint appeal of all the participant parties addressed to the United Nations.

Following the demonstration a meeting of leaders took place at the TNPF office, to discuss the current situation in the Jaffna University and to decide on the next move. All the participant parties of the demonstration took part in the meeting.

The appeal of the demonstrators briefly outlined the events related to Heroes Day observations in the university last year and this year.

Remembering the dead is a basic right, the appeal said.

The International Community (IC) has to understand this. So far the IC has not contributed in any meaningful way to Tamils in their homeland. It kept silent during the war. It keeps silent on the current atrocities committed on the nation of Tamils. It questions the credibility of the IC, the appeal further said, requesting youth in the diaspora and in Tamil Nadu to undertake continued agitations to direct the attention of the IC.

The demonstrators put forth the following four demands: Guaranteeing the Tamils their right to remember the dead; guaranteeing the security of Tamil students, particularly ensuring an environment for their political activism; ensuring the practice of democracy in the Tamil territory and finally, in order to ensure the above, immediately recognizing the nation, territoriality and right to self-determination of Tamils.