Jackals and the mafia of crooks , Editorial, ST 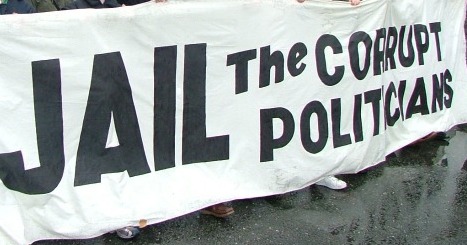 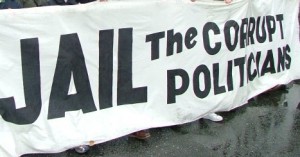 The news that the Securities Exchange Commission (SEC) which regulates the stock market is investigating 17 alleged manipulators is in the public domain now. This was revealed in this newspaper three weeks ago and remains un-contradicted.

No doubt, these 17 remain innocent until proven guilty, but the question is why the Government – or Parliament, is maintaining a deafening silence on the issue.

There’s little to wonder why. Colombo being a relatively small city with a ‘chattering class’, it is common tattle that meny of, the 17 ‘suspects’ are closely linked to the ruling elite. This linkage extends to the level of financing the political campaigns of the rulers, and even more, acting for them as front men.
This talk is allowed to remain in the public domain, and spread. The inaction on the part of the Government only reinforces these theories swirling around. But given Hobson’s choice, the Government opts for the ‘talk’ than the ‘walk’ to smother it. For it just cannot afford to put such manipulators in jail.

The signs were ominous when the earlier SEC chairperson resigned some months back. Being in the position she was in, as the wife of the President’s Secretary, she could not say why she was resigning, but again, the reasons were known to those in the city. To offset the bad media at the time, the President appointed someone who has been a politician and therefore quite familiar with the media. His credentials stood drooping ‘market confidence’ in good stead, but even then, one felt he was a brave, if some what naive man to have gone into that cesspit thinking he could clean it up. The stock market is just a vignette of what is happening in the country in general. Graft is rife, anyone who is someone in the Government sector is trying to put his hand in the till and the Bribery Commission is kept impotent. This may be the buzz in the city, or among the more urbane sections, but that does not mean that it is not happening.

So much so, that it seems the Government has lost control of what is going on around it. “The jackals have taken over,” said one of the more straightforward insiders of the administration. And once those at the lower levels realise that the top is corrupt there’s no stopping them either. Take the case of the Police. It has been listed as the most corrupt public institution in the country. One of the reasons for this is because they have been given the powers to enforce the law, the power to interpret it and discretion over it, which leads to breaking it. The corruption in the Police is widely seen on the roads.

Not just that they take bribes from errant motorists (who also give knowing the chances of arrest for inducing a public officer is nil), but see the way private buses ply the road caring two hoots for the Highway Code. Why? Because some of these buses are owned by senior police officers while the middle level officers own vans and the sergeants own three-wheelers. Some of them are parked inside police stations at night and constables drive them for hire during their off hours.

This is the trend that has spread to all sectors of the Government. The private sector then is quick to play according to these new rules.

Ask any investigator who is serious about the work he does, and he will see that ‘if there is a will, there is a way’. They point out to the Commission asking a police officer to take cognizance of an unchallenged news item in the newspapers, or even an anonymous but credible petition and lodge a formal complaint. Clearly, there is no will in the first place and therefore no way that the Bribery and Corruption Commission in Sri Lanka will clean the Augean stables of the Government.
In recent times, the ‘development economy’ that this Government boasts about is replete with complaints of inflated tenders, tender-fixing, cut backs and a lot of give and take between private individuals and government authorities. The amassing of undeclared wealth and assets, money-laundering through the stock market is mind-boggling. The Department of Inland Revenue is competing for first place in sleeping with the Bribery and Corruption Commission.

We also see the Government’s inaction to punish wrongdoers in the contaminated fuel scandal. The President does not want to admit anything is wrong with his administration by sacking the Minister. Earlier, those who caused huge losses in the petrol hedging cases went scot-free. He has been fed stories about the Greek bonds scandal. It is almost as if the President is easily gullible to con-artists in the higher echelons of his administration.

In the media, there are advertisements calling for people to invest in apartments in Paris and for billion-rupee projects. Sober economists would say that these are not signs of a burgeoning and robust economy, but one of a ‘bubble economy’ waiting to burst. It is an economy of the noeveau riche, the beneficiaries of crony capitalism, as the last SEC Chairman Thilak Karunaratne called it, a mafia of crooks.