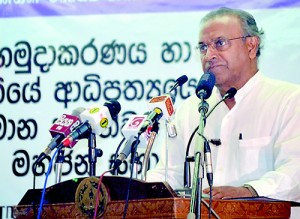 Namini Wijedasa
Lawyers, academics and activists hit out at the growing militarisation of every aspect of society at a forum organised by the BASL to analyse the implications of a gazette vesting police powers in the armed forces.Speakers at a crammed public forum this week denounced increasing military encroachment into various aspects of civilian life and warned that it boded ill for the country’s future.The gathering was held by the Bar Association of Sri Lanka (BASL) at the Sri Lanka Foundation Institute auditorium to analyse the implications of a gazette vesting police powers in the armed forces.
A spokesman said the BASL will also organise such discussions in other parts of the country.
Issued under Section 12 of the Public Security Ordinance, the relevant gazette is renewed every month. It sees President Mahinda Rajapaksa calling out all members of the armed forces for “maintenance of law and order” in all administrative districts of Sri Lanka. Each of the ten speakers at the forum emphasised that this was not conducive to peace, democracy and the rule of law.
It is nearly five years since the war against terrorism ended and “we still unfortunately see the prevalence of a military presence, not only in the north, but also in the south,” observed Jayantha Dhanapala, former UN Under-Secretary General for Disarmament Affairs. It was important to have a sustainable peace, he stressed, and “not the securitisation of the State, which is what we see today”.
A comparison of the Defence Ministry budget allocations of 2009 and 2014 shows a substantial rise that cannot be accounted for by 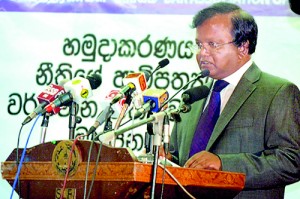 DSC_0024
Upul Jayasuriya
inflation, Mr. Dhanapala said. There was also a significant increase in the armed forces and in the strength of the armed forces which “cannot be explained”.
Mr. Dhanapala cited the Government’s own Lessons Learnt and Reconciliation Commission as recommending that it was important for normal civilian life to resume in the war-affected provinces. The LLRC called for a “viable demilitarisation” and a return to full civilian administration. “An environment of fear and mistrust is incompatible with reconciliation,” he said.
Every seat in the large auditorium was occupied forcing some listeners to remain standing. The address by Chandraguta Thenuwara, spokesman for the Federation of University Teachers’ Associations (FUTA), drew laughter from the audience. He said the government now takes a new type of credit called “Chi-naya”—“Chi” being short for China and “naya” being the Sinhala word for loan. The State has cut funding to universities while allocating more money to the Kotelawala Defence University. 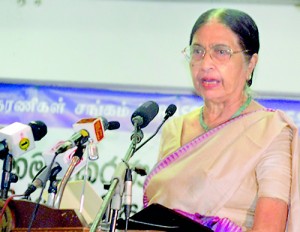 DSC_0177
Savitri Goonesekera
Mr. Thenuwara criticised the leadership programmes run for new university entrants by the military. The university system also did not require protection from the army’s new security company called Rakna Lanka. Having existed for more than 100 years in Sri Lanka, universities were capable of meeting their own protection needs.
A team of professors from Kelaniya University had for the first time devised a course in forensics, Mr. Thenuwara said. The authorities had feared that they would sell out the country as forensics concerned dead bodies. It resulted in the lecturers being summoned for a “cordial” meeting with Defence Secretary Gotabaya Rajapaksa and his staff.
The army did everything from planting flower gardens to growing vegetables, Mr. Thenuwara said. Soldiers were being deployed like slaves to build parks and highways. “Militarisation, in whatever form, cannot be supported,” he asserted. “If the war is over, the army must go home. It must be reduced, not expanded. They must become ordinary citizens. They have today shoved aside ordinary citizens and put in their place soldiers in civilian clothing.”
BASL President Upul Jayasuriya accepted that the army or military was an integral part of a State’s defence system. “However, they have no role to play in policing a society,” he said. “On the contrary, they are regimented to act on the dictates of politicians in power.”
“In this backdrop, society has rapidly been tilted towards militarisation,” he cautioned. “The military rule which has been enforced under the guise of the civil war, is gradually over shadowing a democratic society.” 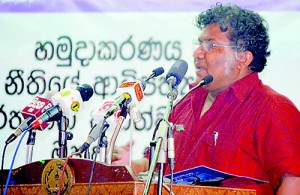 DSC_0100
Chandraguta Thenuwara
The gradual decline of the rule of law over the last few months has now “reached a critical point”, Mr. Jayasuriya said. “Human rights and Humanitarian laws have been completely disregarded,” he continued. “The entire society has fallen prey to subjective standards of a few who hold unlimited power and a few others who are closely linked to them. Laws that must apply to all persons irrespective of their status do not seem to apply to them. They appear to act above the law.”
Mr. Jayasuriya accused “those in the highest level of governance” of blatantly violating the law in the full glare of public scrutiny. “If this situation is permitted, it would create a dangerous trend where privileged persons would have no law to obey.”
T. Thamilmaran, Dean of the Colombo University’s Faculty of Law, held that the relevant section of the Public Security Ordinance was more suitable to a parliamentary system than to an executive presidential system where the political authority empowered to involve its provisions is “a head of State, a head of Government, head of Cabinet, Commander-in-Chief of the armed forces and also the leader of a political party”.
“Like in the case of proclaiming the state of Emergency, it is the sole discretion of the President who decides on the existence of the circumstances endangering the public security,” he explained. “Is the discretionary power of the president subject to any check? Is it a government of laws or is it a government of men?”
Dr. Thamilmaran also lamented that, in Sri Lanka, whenever the actions of the Government were criticised, it was construed as being against the State. He was supported in this view by Prof. Savitri Goonesekere who said that, “Those who talk about the rights of people, guaranteed within our constitution, are nevertheless considered traitors and as people who are challenging the path to national development.”
“What we see today is a manipulation of the idea that the military is important for national security to undermine the rule of law and the guarantees of the rights of the people through a process of militarisation that goes into the area of civilian governance,” Prof. Goonesekere analysed.
Even in colonial times, the courts of Sri Lanka have upheld the importance of the core values of human rights such as freedom from illegal detention, she emphasised. Many cases integrated the idea of human rights into our legal systems.
“When the constitution of 1978 actually incorporated Chapter 3 on Fundamental Rights, that was a continuity of a legal tradition that was very much a part of the history and experience of this country on governance,” she remarked. “We are constantly told that human rights are a western ideology that has come from somewhere else, that is alien from our experience. Today is an occasion to reinforce that this is not so at all.”
Chandra Jayasuriya, a good governance activist and a former head of the Ceylon Chamber of Commerce criticised the “expropriation bill” under which the government took over businesses in violation of international agreements. He said funds are passed, enacted and spent outside the annual Appropriation Bill despite the Constitution and the Supreme Court holding that finance is a function of Parliament. Among other things, he said the armed forces run businesses in competition with markets in both the north and south.
“There is a new tendency to use revanchist logic in the beautification of the country,” he said. “Through the power of the military, the poor are suppressed.” These are shown to be positive features “but it’s a measure of control and militarisation in the guise of economic development,” he warned.