Is there any hope in COPE? 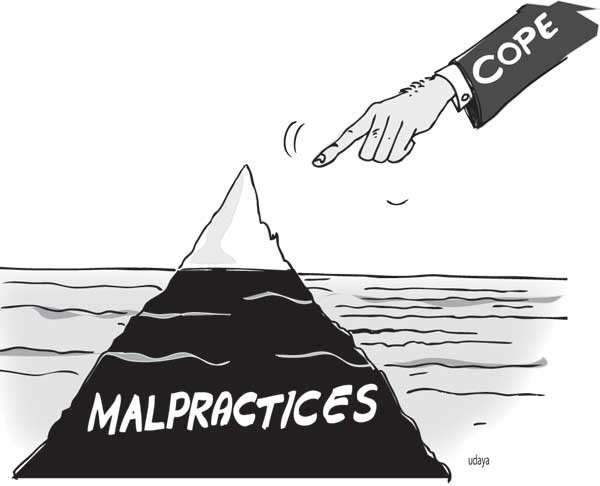 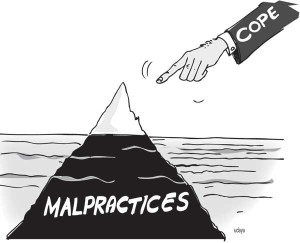 By Kelum Bandara
Minutes after day’s business started in Parliament on Thursday, Senior Minister D.E.W. Gunasekara rushed to his seat in the chamber of the House, as he was to present the interim report of the Committee on Public Enterprises (COPE).
The COPE, the parliamentary watchdog committee on financial performances at state bodies namely boards, bureaus, commissions and authorities, has furnished its interim report spotlighting financial malpractices and irregularities at 32 institutions which came under scrutiny so far this year.

Greek bonds
The report presented by Mr. Gunasekara highlights six transactions of poor accountability, which have drained billions of rupees from state coffres. Key among them is the Central Bank’s investment in Greek Government Bonds with a face value of 30,000,000 Euros, regardless of the collapsing economic situation in that country. In the overall transaction, the Central Bank has lost as much as US $ 15.6 million. The explanation given by the Central Bank authorities is not convincing in this regard. According to the bank, there is profit made from overall investments in the European region, and therefore, the setback in Greek is a case in isolation only. Yet, the fact remains that the country has lost US $ 15.6 million. Worse is the fact that this investment has been made despite a high credit risk predicted by rating agencies.

Sri Lanka Insurance Corporation
Sri Lanka Insurance Corporation’s re-insurance agreement with a bogus company called ‘Trans Asia Management Advisors FZC and the subsequent loss of Rs.208 million, the contentious investments by the People’s Bank, the failure to indentify the actual income from the IIFA Film Festival and the swindling of Rs.9 billion by Sri Lanka Tea Board are among the other cases of questionable handlings of public money.

The COPE, after studying the Auditor General’s report, casts its spotlight on the mismanagement at the People’s Bank. As of August, the non-performing loans of the Bank have accumulated to a staggering Rs.5 billion, and COPE members believe this amount might have risen to Rs.7 billion as of now. These are loans given to 109 persons. Right-thinking people want to know who these individuals are. An ordinary farmer who is unable to pay the installment of his small agriculture loan is always taken to task by the banking authorities. But, powerful individuals enjoying political patronage have been able to default the payment of their loans, and escape being dealt with under the law of the country. Therefore, it is all the more important for those responsible to disclose the names of these defaulters, and as to why they did so.

Lankaputhra Development Bank is another financial institution that came under scrutiny by COPE during the year. In two instances, the bank has issued Rs. 9,354,035 to Keen Wear International and Rs.8,834,091 to Osaka Garments. Both the garment factories are not functioning at the moment and the question remains whether these loans can be recovered. Besides, Rs.700 million has been released to Tri Star Apparel Export, but only Rs.20 million has been repaid. The Bank has also violated the Central Bank guidelines by granting loans without obtaining a valuation report on the property mortgaged.

Udarata Development Authority
The weak administration and lack of supervision of Udarata Development Authority have cost the state dearly as pointed out in the COPE interim report. In one incident, Rs.2.5 million had been overpaid for the construction of the Ambuluwava-Ganetenna road, but investigations had been stopped due to the mysterious misplacement of files and documents. The COPE has faulted the Authority in not carrying out internal inquiries in this respect. However, the case has been referred to the Bribery Commission and the Criminal Investigation Department at the moment.

Immoral activities done in the guise of running ayurvedic massage centres have drawn the attention of COPE this time. Sri Lanka Ayurvedic Medical Council can take legal action only against registered massage clinics. The Committee directed the Council to supervise all such centres after amending the necessary regulations.

Frauds, malpractices, irregularities and corruption are rampant at Sri Lanka Samurdhi Authority established for poverty alleviation and the economic empowerment of rural people. In one such instance, a manager of Samurdhi bank has obtained a loan of Rs.1,025,000 under the name of a beneficiary. The CID is now investigating the matter. A sum of Rs.131.1 million due for the winners of the National Development Lottery still has not been awarded. Some winners have either died or left the country. There are others yet to be identified. The poor management of the Authority shows in the incident where they invested Rs.86 million in four institutions during the period between 2000 and 2004, but with no return or dividends. Also, Samurdhi bank has provided Rs.30.5 million to a private organisation for the establishment of a garment factory without doing a feasibility study.

Sri Lanka Rupavahini Corporation
Sri Lanka Rupavahini Corporation has also been a place of financial mismanagement and irregularities over the years. The parliamentary oversight committee observes that the Corporation has recovered only Rs.148, 370 out of the total Rs.42 million due from various political parties for using airtime. Besides, credit facilities running to the tune of Rs.62 million had been given to some private companies. But, these companies have been closed down at the moment making it impossible for the Corporation to recover the amount. The COPE says that the Corporation is run at a loss continuously.
The Committee as its social responsibility finds that degree programmes conducted in the universities have not been revised in conformity with modern trends. It is of the view that the university education needs drastic changes.

Graduates’ lack of competence in English Language skills, lack of commitment by such lecturers to academic performance,

and administrative lapses at some other universities are the other issues of concern to COPE this time.

For the last time, COPE submitted its report on December 1, 2011, highlighting financial positions at 229 state institutions.
Minister Gunasekara said COPE, as the committee overseeing public finances as the foremost job of Parliament, has achieved successful results. He said that most institutions now prepare their annual reports in time and send them to Parliament after COPE recommended it last time. Likewise, chief accounting officers of various ministries were asked to adhere to financial rules and regulations to prevent malpractices and irregularities.

No sooner than the Minister presented the report, Chief Opposition Whip John Amaratunga asked for a full day debate in January, next year on the findings of this report.

All in all, the crux of the matter remains whether those who embezzled public money can be brought to book based on findings by COPE. The debate between the government and the opposition in this regard has been dragged on for a long time.

So far, 11 reports have been presented in Parliament starting from 1994. But, there has been a lackadaisical approach in taking action against the wrongdoers. COPE does not have enough power to pursue action in this exercise, and therefore the need to empower the Committee further has been mentioned by many concerned about good governance, transparency and accountability.

UNP MP Ravi Karunanayake who is a COPE member said, “We, as COPE members, can only bark. But, we cannot bite. We will do the biting soon.”