Is India party to Sri Lanka’s refusal of power to the Tamils? Only India’s deeds, not words, can answer this critical question. 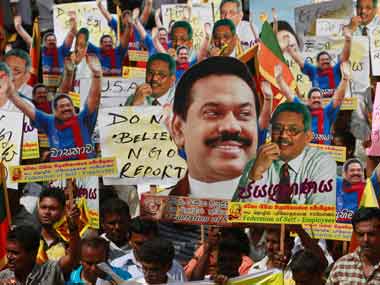 The bitter voices against the provincial council election in the North of Sri Lanka, which is home to majority of the country’s Tamils, betray yet another treacherous design of the Mahinda Rajapaksa government to further marginalise Tamils and homogenise the country into a Sinhala Buddhist nation.

These voices, most of which appear to be state-sponsored, are also a ploy to renege on the Rajapaksa government’s promise to the world that it would devolve power to Tamils as part of the 13th amendment that it had agreed with India under the 1987 Accord.

Ironically, the implementation of the 13th amendment has been a promise that President Rajapaksa has been brandishing since 2006, particularly to redeem some respectability for his blood-stained government after the end of the war in 2009. He had promised among others, the UN Secretary General Ban Ki Moon that implementation of the 13th amendment was part of the political solution his government planned.

This claim was repeated several times in several parts of the world, including Delhi.

But, when it comes to actual implementation, Rajapaksa changes colour, which curiously coincides with a sudden upsurge of acrimony, primarily from his own camp and his proxy-reserves. The most outrageous was from his defence-secretary brother and the principal war-triumphalist Gotabhaya Rajapaksa.

Gotabhaya said the proposed election will pose a security threat to the nation because the Tamil National Alliance (TNA) is likely to win. The TNA is a political party that is considered to be a vestige of the LTTE. So in effect he didn’t want a democratic election because a party that he doesn’t like will certainly win.
Minister and leader of the National Freedom Front Wimal Weerawansa, another hardliner, made an equally bizarre demand – take the police and land powers from the provincial council before holding elections. His reasoning was equally strange – according to him, other provincial councils are run by national parties and they haven’t claimed these powers.

Here again, the grouse is against the devolution to an area, which the 1987 Accord clearly mentions as “historical habitation of Tamil speaking people”.
And that is not all.

The government also wants the 13th amendment to be diluted by introducing a 19th amendment to the constitution. The secretary to the President Lalith Weeratunga said that the 13th Amendment was imposed by India and Sri Lanka accepted it in the “face of an invasion.”

He said the country’s administrative process had changed and hence there had to be another look at the provincial council system. “President Rajapaksa always gives clear directives to us to close down establishments which do not provide the expected services to the people,” he said hinting that there was no place for a provincial council in the government’s scheme of things. The majority of Sri Lanka’s nationalist political commentators have also aired similar views, which range from an absolute no to provincial councils in Tamil areas, to advocating a highly truncated version, which can be puppetered from Colombo.

So, the summary of the story is that Sri Lanka doesn’t want to implement its long-held promise of devolution of power to the Tamils or accept the cultural and ethnical identity of the North and the East. They are also worried that the North and the East will decide to merge, a move that will effectively then account for 30 percent of the country.

Since the war-triumph, the government has been trying to force a demographic transition to make the North less Tamil – by settling Sinhalese, acquiring large tracts of land, militarising the area etc. Activists allege that even the exodus of Tamils to countries such as Australia is state-engineered because it is aided by smugglers with support from the government.

The fact is that even the death of about 40,000, a large number of displaced and the fact that many people are continuing to leave the country is not enough to change the demography of the North because it is the homeland of Tamils. That is precisely what the Rajapaksa government and his agents cannot seem to stomach.
The elections to the provincial council also appeared to be a pre-condition to the heads of commonwealth nations agreeing to meet in Colombo in November. Human rights groups across the world had warned them that Sri Lanka would misuse the CHOGM (Commonwealth Heads of Government Meeting) summit to whitewash its war crimes and rights violations.

Despite all his promises and grandstanding, Rajapaksa going back on the 13th amendment and the devolution of power is not surprising because duplicity and subterfuge have been the essential characteristics of his foreign policy. Making promises with a clear objective not to implement them has been his proprietary strategy while mobs, whether in the diplomatic circuit in Geneva or on the streets in Sri Lanka, set out to silence critics.

It’s not just Sri Lanka that needs to account for the promises on the 13th Amendment, but also India. India is the architect of the 1987 Accord, which had said the following:

Each ethnic group has a distinct cultural and linguistic identity which has to be carefully nurtured (section 1.3),
Northern and the Eastern Provinces have been areas of historical habitation of Sri Lankan Tamil speaking peoples, who have at all times hitherto lived together in this territory with other ethnic groups (section 1.4)
It also said that there will be a referendum to enable the people of the eastern province to decide whether they want to remain linked with the northern province or remain separate.
Now the issue is, where does India stand?

What happens to the promises the UPA government has made to the people of India, particularly in Tamil Nadu? In all probability, Sri Lanka will renege on its commitment to India and the rest of the world. What will India do in such a situation?

All these years, whenever the UPA government came under criticism for non-action in Sri Lanka, it held aloft the 13th Amendment. As late as January 2012, the then foreign minister SM Krishna had said that Sri Lanka had conveyed its commitment to a political settlement based on the full implementation of the 13th Amendment.
Is it a case of Sri Lanka fooling India or both of them together fooling the rest of the world?
Only India’s deeds, not words, can answer this critical question.
FP