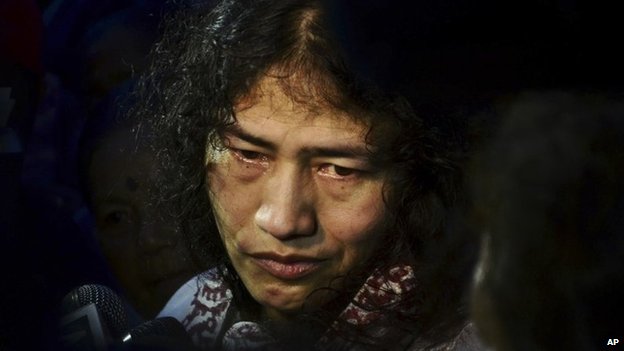 Irom Chanu Sharmila was born to an ordinary family in the Manipur state in India in 1972. Manipur is a state of ethnic minorities in India, that has been under military control for decades. In November 2000, a special wing of the Indian military named “Assam Rifles” killed 10 persons. Sharmila was a young actvist at that time and had just returned from a human rights training. Sharmila started a fast unto death, calling for the repeal of the Armed Forces Special Powers Act, a law that was allowing Indian Armed Forces to act without any accountability. She was imprisoned for 13 years untill Courts ordered her to be released on the 18th of August if there no charges against her.

She had rejected food and water thoroughout the 500 weeks she has been imprisoned. She was forcibly fed through her nose while being kept in a prison hospital.

It is a privilege to hear the story of such a woman or man. It is through spiritual strengh and dedication of such men and women that struggles for freedom and equality of humanity will be strenghened.

Her determination became known not just in Manipur, but all over India and the world. She was dubbed as “Iron Lady of Manipur” and was the dominant symbol during commemerations of International Women’s day in India on 8th March this year.

According to Sharmila, “I was pained when I saw the bodies of those killed. There was no way to stop the violence by Armed Forces. I choose a fast, as it was a spiritual revolution. I decided to fast for the Manipuri people. It is not a personal struggle. It is a symbol of truth, love and peace,”

The killings happened on a Thursday. Thursday was the day Sharmila used to fast as a habit. “I will fast continuosly from today to stop such killings” was what Sharmila decided, when she was 28 years old.

After 3 days, she was arrested on allegations of trying to commit suicide through fasting. Her health deteriorated and forcefeeding her through the nose started.

According to Indian law, the maximum punishment for attempting to commit suicide is one year. Hence, she had to be released nominally every year. On every occasion she was released in the last 13 years, she re-ccommenced her fast. Re-arresting Sharmila and forcefeeding her became a annual event. She was kept in solitary confinement to break her spirit.

After six years in detention, authorities proposed that she could be released if she admitted guilt. She rejected this outright, insisting that she has not committed any offence and that fasting peacefully was her right. She was not ready to swallow the bait of “freedom” and give up her struggle.

By then, Sharmila had become a symbol of public defiance andresistance in India. On 2nd October, she was granted her “annual freedom”. She took the opportunity to visit her spiritual idol, Mahatma Gandhi memorial, to offer flowers. After this visit to New Delhi, she again commenced her fast.
She knew very well that she would be imprisoned again and subjected to painful forcefeeding through her nose. But the committment she has made to herself to continue the struggle on behalf of her people was larger than even this pain.

The struggle by one woman had already created waves. Organizations in India and Asia began to present her with awards. The Rabindranath Tagore Peace award was also presented to her. She became an inspiration and challenge to human rights movements.

As support for the “Iron Lady” began to rise, the Communist Party of India (Marxist – Leninist) decided to support her call to repeal the Armed Forces Special Powers Act. There were proposals that the demand must also be approved by another powerful regional party, the Indian Trinamool Congress. The anti-corruption Aam Aadmi Party invited Sharmila to contest elections from her party. “Im a campaigner, not a politician. Therefore, I do not want to contest elections” was Sharmila’s response. When she became 39 years in 2011, the Pune University initiated a scholarship program for 39 female students, in her name.

The struggle of this “Iron Lady” has become subjects of cinema and theatre. But she remains determined and focused in her struggle. When she heard of her release, she has said that “it is a joy to enjoy fresh air once again”. But she had insisted that “There is no point in thanking and singing praises of me. What is needed is to take forward the struggle.”

Joy is part the struggle. Struggle is a part of Joy. Victory maybe far away. Joy during a struggle will bring alive a distant victory.
Cheers to you, “Iron Lady”, Irom Chanu Sharmila!

Postscript:
As expected Irom Sharmila Chanu re-started her hunger strike in a makeshift camp in Imphal and was arrested two days after her release. BBC reported that ” On Friday, a group of policewomen forcibly removed her from the fast site in the state capital, Imphal.Television footage showed them putting her in a jeep and driving away”.