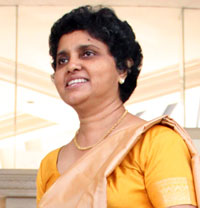 By Dharisha Bastians
Amidst Opposition fire, the ruling UPFA coalition set the Constitutional process in motion to remove the Head of the country’s judiciary, by handing over a motion of impeachment against the Chief Justice Shirani Bandaranayake to Speaker of Parliament Chamal Rajapaksa yesterday.

The motion, signed by 117 Members of Parliament, was handed over to the Speaker by four UPFA MPs led by Minister Pavithra Wanniarachchi and including Deputy Minister Lasantha Alagiyawanna, Shantha Bandara, and Arundika Fernando.

The auspicious time of 10:12 a.m. had been picked for handing over the motion.

The impeachment motion has been filed under Article 107 of the Constitution pertaining to the appointment and removal of judges, on charges of ‘improper conduct’. The Daily FT learns that there are six charges of improper conduct against Chief Justice Shirani Bandaranayake contained in the motion.

Reuters quoted Cabinet Spokesman Keheliya Rambukwella as telling reporters that the “Government members believe that the Judiciary is overstepping its limits and (she) violated the Constitution,” but did not elaborate on the charges against the Chief Justice. “We handed over the impeachment motion with 117 signatures to the speaker,” Arundika Fernando, a member of Rajapaksa’s ruling United People’s Freedom Alliance (UPFA) told Reuters.

Once the motion is tabled in Parliament by the Speaker, a party leaders’ meeting will follow, at which a Parliamentary Select Committee will be appointed to investigate and deliberate on the charges. According to Article 107 of the Constitution, dealing with the appointment and removal of judges, there must be proof and investigation of alleged misbehaviour and the judge in question has the right to appear and be heard.

The Government’s move follows weeks of friction between the Executive and the Judiciary, compounded by a Supreme Court blockade on the controversial Divi Neguma Bill that seeks to transfer powers devolved to the Provincial Councils back to the centre and a violent attack on the Secretary of the Judicial Services Commission, empowered to appoint, transfer, and initiate disciplinary action against judicial officers.

The move against the Judiciary also coincides with Sri Lanka’s date to face its Universal Periodic Review at the UNHRC in Geneva, where the International Committee of Jurists, a global grouping of 60 eminent judges and lawyers, in a 150-page report to the council said the Judiciary in Sri Lanka was under increasing attack and the Sri Lankan Government has made it all but impossible for victims of human rights abuses to get justice.
UNP General Secretary Tissa Attanayake said his party would participate in a Parliamentary Select Committee set up to study the motion, where the Government would have to prove its charges of improper conduct against the Chief Justice.

“The most important stage we feel is the Select Committee. This is where the allegations will have to be proved,” Attanayake said, adding that the UNP stood firmly against the ongoing attacks on the Judiciary and threats to its independence.

Other Opposition legislators have condemned the move as being politically motivated.
Senior UNP MP Karu Jayasuriya, who is currently overseas, charged that this move would be seen as a witch-hunt against the Chief Justice because of its timing. “It is an open secret that the regime is at loggerheads with the Judiciary. Therefore the Government’s motive in moving against the Head of the Judiciary at this juncture raises serious questions.”

He added that it was unprecedented for a chief justice to be impeached by the same administration that made the appointment. “Public perception is that this is not a good thing for the country and sends the wrong message about Sri Lankan democracy at a time when the country is under grave international scrutiny,” he warned.
UNP National List MP Eran Wickremaratne warned that Sri Lanka was descending into a Constitutional dictatorship with the move. “News of the impeachment motion is both surprising and shocking,” the Opposition lawmaker said. “Surprising because she has been on the bench for 15 years and her judgements have been acceptable to the regime. Shocking because it is blatant interference with the independence of the Judiciary,” Wickremaratne told Daily FT.

JVP MP Vijitha Herath told the Daily FT that the impeachment motion was a direct result of the Government failing to get its way with the Supreme Court on the Divi Neguma legislation. “They tried various intimidation tactics on her first, by filing corruption charges against Pradeep Kariyawasam and threatening to abolish the 13th Amendment,” he said.

The Marxist party member added that the JVP condemned the move as a blatantly undemocratic act. “We see no valid reason to impeach the Chief Justice. This is an attempt to force the Judiciary into submission,” he added.
The JVP member said that the whole process could take months, but added that with the Government holding the majority in the Parliamentary Select Committee, the motion would probably carry. “No doubt they’ll want to push the process forward as soon as possible,” he said.

TNA MP Suresh Premachandran told AFP yesterday that the Government was determined to suppress anyone who attempts to stand against the Executive. “This is autocratic behaviour, no question about it,” he told the news agency.

Ravaya Editor – and author of a book on the relationship between the Sri Lankan Government and Judiciary – Victor Ivan told AFP said it was a classic case of friends turning foes after courts started asserting their authority in recent months. “The Judiciary and the Executive behaved like very good buddies in the past,” Ivan, a former journalist who describes himself as an “outspoken friend of the President,” told the news agency. “Now that rulings are going against the Government, they are fighting in public.”

“It is like two freight trains moving at each other at high speed. Both will be destroyed as a result of this confrontation. It will also undermine public confidence in both institutions,” Ivan said.
Attempts to impeach a chief justice last occurred in November 2003 when the then United National Front

Government headed by Ranil Wickremesinghe tried to impeach former Chief Justice Sarath N. Silva.
The Constitutional requirement for the Speaker of Parliament to entertain a motion of impeachment against a sitting chief justice is 75 signatures or one-third of the 225-member legislature. To be carried, the motion requires a simple majority of the total seats in the House – 113 votes.