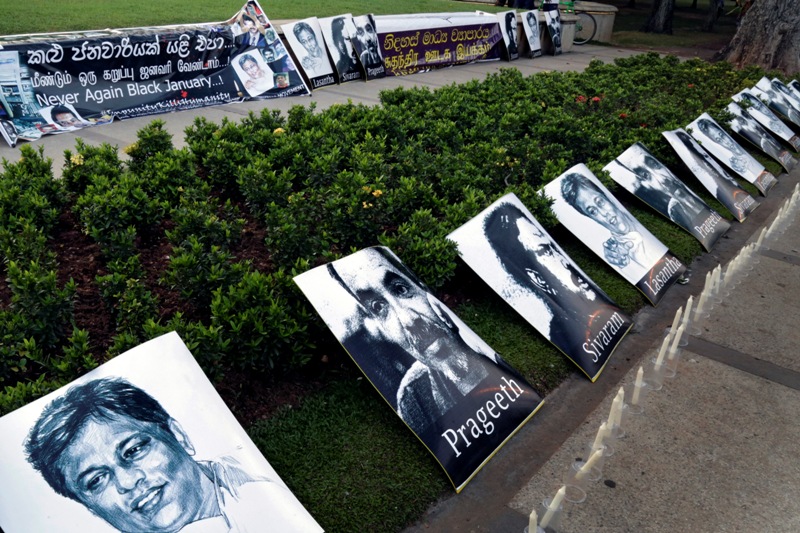 (Placards placed by journalists bearing the names and faces of several killed or disappeared colleagues during a protest titled ‘Black January’ in Colombo, Sri Lanka on Jan. 21, 2016. The journalists held the protest to remember a series of attacks against journalists during the month of January in recent years. EPA/M.A.PUSHPA KUMARA)

IPI Contributor Katy Witkowski.
The International Press institute (IPI) today called on Sri Lanka’s government to bring to justice those behind the recent beating of a journalist who was attacked and struck in the head with a pole.

The attackers fled the scene on a motorcycle without license plates, according to local news reports. Gamage was treated at a local hospital for the injuries he sustained and said he continues to feel the ill effects of the attack.

Gamage has exposed alleged corruption by the Lanza family, which is politically active in Negombo, including possible connections to black market trading. He claimed that two brothers, Nimal and Dayan Lanza, are the masterminds behind the attack, saying they previously threatened him for his reporting.

“In 2009, [Nimal Lanza] called me at my office and said if I’m going to continue writing about them, he would kill me,” Gamage told IPI. “I went into hiding for one month.”

Authorities have arrested two suspects in the attack, but police told Gamage that there is not enough evidence to hold the Lanzas responsible. However, police did note that one alleged attacker currently in custody received 16 calls from Dayan Lanza on the day of the incident.

“My fear is that this family is very powerful,” Gamage told IPI. “[Dayan Lanza] is a very close ally of the past president, and his elements are still operating through the government itself now.”

Media personnel and local human rights groups have protested the attack, calling on the authorities to arrest all involved. IPI today echoed those calls.

“Although the current government has made strides forward in terms of media freedom, the attack on Mr. Gamage is disturbing and we call on authorities to conduct a full investigation and hold all involved, including any masterminds, to account,” IPI Director of Advocacy and Communications Steven M. Ellis said. “We also urge authorities not to allow the presidency of Maithripala Sirisena, who took office last year amid high hopes, to be marked by the same impunity for crimes against journalists that characterised his predecessor’s tenure.”

In a separate incident after the attack, Gamage said that he noticed suspicious people who “rushed” towards him as he left his office.

“They’re trying to make me fear because they think I can stop moving with the case,” he explained, adding that he is now considering a “mobile” life in which he never travels alone, changes vehicles often and sleeps in different places.

Sri Lanka was ravaged by civil war for nearly 26 years, as ethnic Tamil rebels maintained an insurgency against the government until 2009. Both rebels and the authorities had a negative impact on press freedom, and media outlets faced censorship and targeted attacks as conflict ebbed and flowed.

While former President Mahinda Rajapaksa, who was ousted in a surprise election defeat in 2015, was able to bring about an end to the civil war, his government regularly intimidated and threatened journalists. Following Sirisena’s election, media freedom defenders expressed hope that the new government would institute widespread reforms.

Gamage said he actively participates in forming a coalition of politicians, media personnel, military and police officers in order to create mechanisms by which journalists can consult representatives from the authorities and find protection. However, much remains to be done. Tamil journalists continue to face threats and attacks in the northern and eastern areas of the island.

Moreover, Sri Lanka’s inspector general dismissed a media representative to whom journalists could lodge complaints, but he has yet to appoint a replacement. Impunity persists, as investigations of murdered journalists have largely stagnated. Gamage told IPI that he works on a campaign that aims to keep these journalists’ cases from falling through the cracks by commemorating each on the anniversary of their deaths. However, in many of those cases police have made little progress