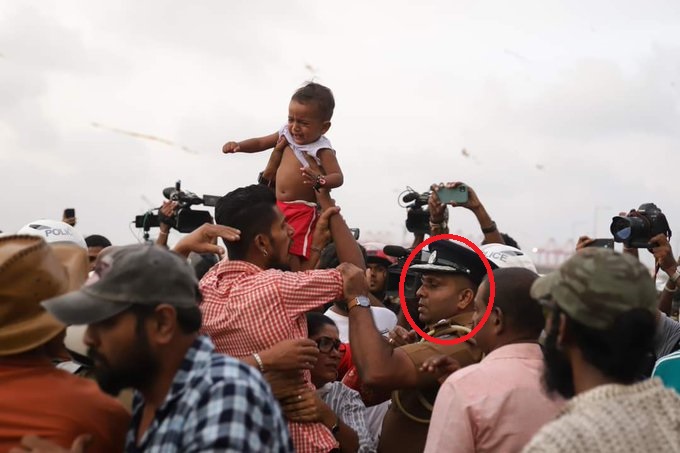 Demanding an investigation into the attack on the peaceful protestors and the arrest of Assistant Superintendent of Police Dilruk and others.

A group of police officers who stormed a peaceful protest and celebration held yesterday (09, October) at Colombo Galle Face Green interrupted it and the participants were treated cruelly, inhumanely and humiliatingly.

While the right to free speech is protected by the constitution, the Sri Lankan police not only allowed them to enjoy this right, but also attacked the peaceful gathering  and arrested a number of people including a school student.

Police officers including Assistant Superintendent of Police, Nalin Dilruk harassed a couple holding a one year old child and harassed a mother accompanying a girl child. In addition, a teenager who is still attending school was arrested while he was broadcasting the incident live on social media and detained for several hours. He was among the  number of peaceful protesters were also arrested.

A one-year-old child has been hospitalized due to police harassment and the child’s father is also hospitalized.

It is clearly from the videos of the event t how those police officers not only violated basic rights but also committed offenses under the Convention Against Torture and Other Cruel, Inhuman or Degrading Treatment or Punishment and offenses under the Penal Code.

Once the investigation begins, the necessary evidence will be made available.