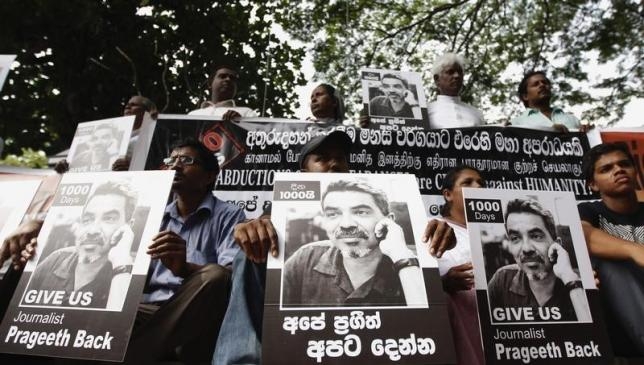 Nalaka Gunawardene has worked in the public media and development spheres for over 25 years both in Sri Lanka and elsewhere in Asia. He is the chief editor of Rebuilding Public Trust: An Assessment of the Media Industry and Profession in Sri Lanka, released in May 2016.

Mahinda Rajapaksa was president of Sri Lanka from 2005 to 2015. Since Maithripala Sirisena assumed the presidency in January 2015, what’s changed in terms of media freedom?

The current government has had a better track record in relation to freedom of expression (FOE) and media freedoms. But then, we must remember that all human freedoms suffered so heavily during the authoritarian Rajapaksa regime that the recent benchmarks are abysmally low.

Since January 2015, the new government has taken several positive steps. These include: reopening investigations into some past attacks on journalists; ending the arbitrary and illegal blocking of political and news websites; and recognising access to information as a fundamental right in the 19th Amendment to the constitution in April 2015 (with the Right to Information Act being passed by Parliament in June 2016, enabling citizens to exercise the right).

These and other measures have helped improve Sri Lanka’s global ranking in the World Press Freedom Index, compiled annually by Reporters Without Borders. However, Sri Lanka’s FOE glass is still less than half full. Belated criminal investigations are inching forward only in relation to some journalist murders — where is justice for others? We have yet to see a single successful prosecution of an attacker of journalists or media houses. Meanwhile, journalists in the Northern Province allege they are under surveillance by military intelligence. Editorial independence is not yet guaranteed in state owned print and broadcast media — even though blatantly partisan coverage has been phased out.

Thus, much more needs be done to consolidate FOE and media freedom in Sri Lanka — and not just by the government. Media owners and managers bear a major responsibility for creating better working conditions for journalists and other media workers. For example, by paying decent wages to journalists and freelancers, and by allowing trade union rights (currently denied in many private media companies). A marginalized media cannot fight for democracy or social justice!

On Mr. Sirisena’s watch, what are the principal concerns regarding media freedom?

According to his presidential election manifesto, Mr. Sirisena promised to ‘immediately stop state media being used as a propaganda weapon of the ruling party’. This has been partially done, but state media have not yet ridden themselves of decades of sycophancy to become standard-bearers of higher levels of professionalism. The ultimate goal, of course, should be to transform state media into public service media, independent of political and commercial pressures. A modern, democratic government has no business in publishing newspapers or running broadcast stations.

One big disappointment with Mr. Sirisena has been his myopic activation of the Sri Lanka Press Council in July 2015, which was a total reversal of his election promise to stop direct and indirect threats and intimidation against media. This archaic and repressive state body has quasi-judicial powers to probe complaints against the media and impose penalties (including prison sentences) — it has been despised by most journalists since its founding in 1973.

As media sector reforms are slowly getting underway, I hope the government will sustain focus and resolve, even if sections of the media industry resist. These need to be pursued on parallel tracks of law reform and institutional reform. On the legal front, new laws are needed to ensure transparent broadcast licensing; more rational allocation of the frequencies; a three-tier system of public, commercial and community broadcasters; and obligations on all broadcasters to be balanced and impartial in covering politics and elections. An independent broadcasting authority should be set up to pursue these objectives, ending a quarter century of lawlessness in the airwaves.

We also need a legal framework to avoid web censorship. The new government quickly discontinued the practice in January 2015, but it has not investigated past excesses nor introduced any laws guaranteeing Internet freedoms. In such a situation, there is always a possibility of reverting to the bad old practices.

To their credit, the former regime never blocked any social media platform (and, in fact, became adept in using these for political and nationalistic propaganda!) Some current ministers have talked about regulating social media, but I hope sanity will prevail and the post-January 2015 openness will not be rolled back.

Sri Lanka’s parliament passed a Right to Information (RTI) bill in June of this year. Is this a good piece of legislation? Do you have any worries about the bill? What might happen next on the RTI front?

It is a good law, but we have to work hard to make sure it works well. In December 2015, the Centre for Law and Democracy in Canada assessed the draft act and gave it 120 out of a possible 150 points on the RTI Rating, making it the seventh best RTI law in the world. That draft was not significantly changed when adopted six months later. However, we have many good laws that are poorly implemented, so there is unfinished business.

As legal analysts have pointed out, the law has certain limitations. For example, it is not mandatory for the Right to Information Commission and public authorities to publish information on their official websites in addition to their making it available at physical premises. Provisions for whistle blower protection could have been stronger. The Attorney General’s Department’s communications being exempted from RTI disclosure is unhealthy. The inclusion of nongovernmental organizations (NGOs) in the definition of ‘public authorities’ can be misused by a few miscreants to harass charities doing good work.

Notwithstanding these concerns, we have to make the best of the RTI law. Success depends on how often and how many people use this law — the proof is in the filing, persisting and fighting for information release. In media interviews and public talks, I have urged progressive journalists and civil society activists to file as many RTI requests as they can when the law becomes operative in early 2017, and to publicly track the outcome.

How is the passage of the RTI bill perceived amongst the general public? For example, is this a widely debated topic in Colombo? If not, what needs to be done to raise awareness?

In the absence of any surveys, we don’t have specific insights into public perceptions. My impression — based on anecdotal evidence — is that RTI is somewhat known among the more educated segments of society but not yet an element of mass consciousness. Therein lies a huge challenge.

Unlike in India, Sri Lanka didn’t have a grassroots level citizen movement demanding RTI. Instead, it was a group of professionals and activists who advocated it. As I have documented recently, different players approached RTI advocacy in their own ways. Some spread the idea through media and civil society networks, inspiring the ‘demand side’ of RTI. Others lobbied legislators and drafted laws – helping the ‘supply side’. A few public intellectuals cheered from the side lines.

The few dozen who were involved in this journey so far fully appreciate the value of RTI but we need much more awareness, advocacy and training. We also need to counter RTI myths and misconceptions. In recent weeks, before and after the law was passed, some journalists have asked me if the RTI law carries harsh penalties for journalists and whistle-blowers (it has none). One Sinhala language daily was so negative about the RTI law’s ‘restrictions’ on FOE, they argued that newspapers would soon only be able to print ‘comics and little else’! (They were deliberately misleading readers.)

The government must clarify and dispel the misconceptions and assure everyone that the new law does not in any manner or form restrict FOE (and, in fact, it can lead to more informed opinions). Next, government and civil society must tell everyone that this law is a powerful new tool with which to demand and receive public information that can shed light on practical issues.

This interview has been edited and condensed
huffingtonpost.