The coronavirus slayer! How Kerala’s rock star health minister helped save it from Covid-19 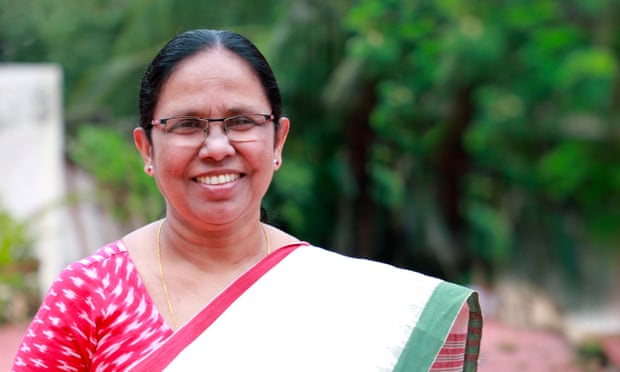 As such, Shailaja Teacher, as the 63-year-old minister is affectionately known, has attracted some new nicknames in recent weeks – Coronavirus Slayer and Rockstar Health Minister among them. The names sit oddly with the merry, bespectacled former secondary school science teacher, but they reflect the widespread admiration she has drawn for demonstrating that effective disease containment is possible not only in a democracy, but in a poor one.

How has this been achieved? Three days after reading about the new virus in China, and before Kerala had its first case of Covid-19, Shailaja held the first meeting of her rapid response team. The next day, 24 January, the team set up a control room and instructed the medical officers in Kerala’s 14 districts to do the same at their level. By the time the first case arrived, on 27 January, via a plane from Wuhan, the state had already adopted the World Health Organization’s protocol of test, trace, isolate and support.

As the passengers filed off the Chinese flight, they had their temperatures checked. Three who were found to be running a fever were isolated in a nearby hospital. The remaining passengers were placed in home quarantine – sent there with information pamphlets about Covid-19 that had already been printed in the local language, Malayalam. The hospitalised patients tested positive for Covid-19, but the disease had been contained. “The first part was a victory,” says Shailaja. “But the virus continued to spread beyond China and soon it was everywhere.”

In late February, encountering one of Shailaja’s surveillance teams at the airport, a Malayali family returning from Venice was evasive about its travel history and went home without submitting to the now-standard controls. By the time medical personnel detected a case of Covid-19 and traced it back to them, their contacts were in the hundreds. Contact tracers tracked them all down, with the help of advertisements and social media, and they were placed in quarantine. Six developed Covid-19.

Another cluster had been contained, but by now large numbers of overseas workers were heading home to Kerala from infected Gulf states, some of them carrying the virus. On 23 March, all flights into the state’s four international airports were stopped. Two days later, India entered a nationwide lockdown.

At the height of the virus in Kerala, 170,000 people were quarantined and placed under strict surveillance by visiting health workers, with those who lacked an inside bathroom housed in improvised isolation units at the state government’s expense. That number has shrunk to 21,000. “We have also been accommodating and feeding 150,000 migrant workers from neighbouring states who were trapped here by the lockdown,” she says. “We fed them properly – three meals a day for six weeks.” Those workers are now being sent home on charter trains.

Shailaja was already a celebrity of sorts in India before Covid-19. Last year, a movie called Virus was released, inspired by her handling of an outbreak of an even deadlier viral disease, Nipah, in 2018. (She found the character who played her a little too worried-looking; in reality, she has said, she couldn’t afford to show fear.) She was praised not only for her proactive response, but also for visiting the village at the centre of the outbreak.

The villagers were terrified and ready to flee, because they did not understand how the disease was spreading. “I rushed there with my doctors, we organised a meeting in the panchayat [village council] office and I explained that there was no need to leave, because the virus could only spread through direct contact,” she says. “If you kept at least a metre from a coughing person, it couldn’t travel. When we explained that, they became calm – and stayed.”

Nipah prepared Shailaja for Covid-19, she says, because it taught her that a highly contagious disease for which there is no treatment or vaccine should be taken seriously. In a way, though, she had been preparing for both outbreaks all her life.

The Communist Party of India (Marxist), of which she is a member, has been prominent in Kerala’s governments since 1957, the year after her birth. (It was part of the Communist Party of India until 1964, when it broke away.) Born into a family of activists and freedom fighters – her grandmother campaigned against untouchability – she watched the so-called “Kerala model” be assembled from the ground up; when we speak, this is what she wants to talk about.

The foundations of the model are land reform – enacted via legislation that capped how much land a family could own and increased land ownership among tenant farmers – a decentralised public health system and investment in public education. Every village has a primary health centre and there are hospitals at each level of its administration, as well as 10 medical colleges.

This is true of other states, too, says MP Cariappa, a public health expert based in Pune, Maharashtra state, but nowhere else are people so invested in their primary health system. Kerala enjoys the highest life expectancy and the lowest infant mortality of any state in India; it is also the most literate state. “With widespread access to education, there is a definite understanding of health being important to the wellbeing of people,” says Cariappa.

Shailaja says: “I heard about those struggles – the agricultural movement and the freedom fight – from my grandma. She was a very good storyteller.” Although emergency measures such as the lockdown are the preserve of the national government, each Indian state sets its own health policy. If the Kerala model had not been in place, she insists, her government’s response to Covid-19 would not have been possible.

That said, the state’s primary health centres had started to show signs of age. When Shailaja’s party came to power in 2016, it undertook a modernisation programme. One pre-pandemic innovation was to create clinics and a registry for respiratory disease – a big problem in India. “That meant we could spot conversion to Covid-19 and look out for community transmission,” Shailaja says. “It helped us very much.”

When the outbreak started, each district was asked to dedicate two hospitals to Covid-19, while each medical college set aside 500 beds. Separate entrances and exits were designated. Diagnostic tests were in short supply, especially after the disease reached wealthier western countries, so they were reserved for patients with symptoms and their close contacts, as well as for random sampling of asymptomatic people and those in the most exposed groups: health workers, police and volunteers.

Shailaja says a test in Kerala produces a result within 48 hours. “In the Gulf, as in the US and UK – all technologically fit countries – they are having to wait seven days,” she says. “What is happening there?” She doesn’t want to judge, she says, but she has been mystified by the large death tolls in those countries: “I think testing is very important – also quarantining and hospital surveillance – and people in those countries are not getting that.” She knows, because Malayalis living in those countries have phoned her to say so.

Places of worship were closed under the rules of lockdown, resulting in protests in some Indian states, but resistance has been noticeably absent in Kerala – in part, perhaps, because its chief minister, Pinarayi Vijayan, consulted with local faith leaders about the closures. Shailaja says Kerala’s high literacy level is another factor: “People understand why they must stay at home. You can explain it to them.”

The Indian government plans to lift the lockdown on 17 May (the date has been extended twice). After that, she predicts, there will be a huge influx of Malayalis to Kerala from the heavily infected Gulf region. “It will be a great challenge, but we are preparing for it,” she says. There are plans A, B and C, with plan C – the worst-case scenario – involving the requisitioning of hotels, hostels and conference centres to provide 165,000 beds. If they need more than 5,000 ventilators, they will struggle – although more are on order – but the real limiting factor will be manpower, especially when it comes to contact tracing. “We are training up schoolteachers,” Shailaja says.

Once the second wave has passed – if, indeed, there is a second wave – these teachers will return to schools. She hopes to do the same, eventually, because her ministerial term will finish with the state elections a year from now. Since she does not think the threat of Covid-19 will subside any time soon, what secret would she like to pass on to her successor? She laughs her infectious laugh, because the secret is no secret: “Proper planning.”