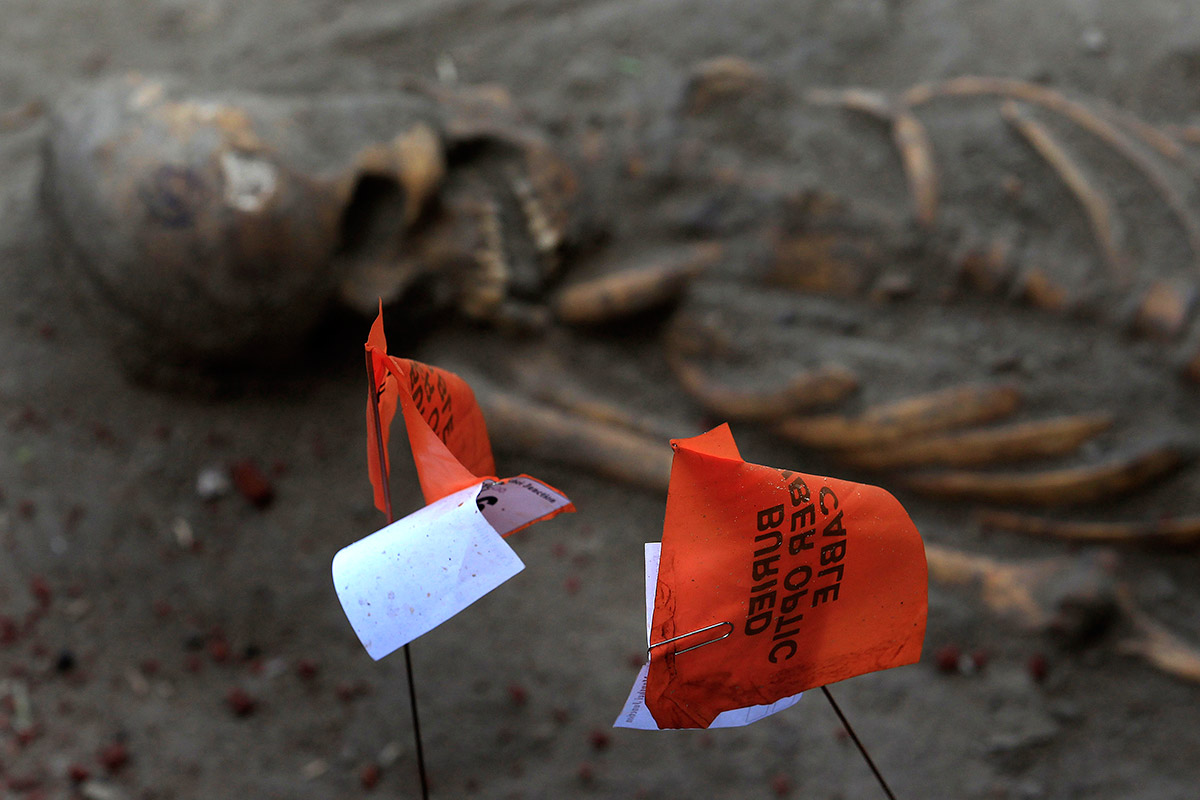 Tamil National Alliance(TNA) Vanni District Parliamentarian, Leader of Tamil Eelam Liberation Organization(TELO) Parliamentary Deputy Chairman of Committees, Selvam Adaikkalanathan said the assistance of international forensic analysts and experts is a must, to detect the truth behind the sudden deaths of former LTTE cadres and that all rehabilitated cadres must undergo medical examinations by an international panel.

Meanwhile, commenting on the recent exhuming of human remains in Mannar, he added that international analysts should be called upon to examine the remains that were found in a well in Thiruketheeswaram.

Following are excerpts of an interview:

The recent sudden and mysterious deaths of former LTTE cadres has created a fear psychosis among former cadres in the North and East, What have you to say about this situation?
A: I will be taking up this issue in Parliament today (9). I met a former LTTE cadre recently in Mullaitivu, he said that he used to be very fit and healthy but of late had been feeling tired and fatigued. He said he had consulted the doctor many times and obtained medicine, but he is yet to overcome the sense of sudden fatigue. He also pointed out that the doctors are unable to figure out the cause or a reason for the sudden fatigue. I view this issue as very serious. We cannot just ignore it, but must immediately pay attention, and help these people.

Also, the Minister of Health, Dr. Rajitha Senaratne had recently stated that former LTTE cadres will be given a proper medical check up. But we feel that instead of local doctors, foreign doctors should be invited to carry out these medical examinations. It must be an independent and transparent medical examination.

We cannot say that these sudden deaths are just conjecture. We are wondering whether certain pre planned moves have been taken in the past to control the life span of rehabilitated LTTE cadres. Also, it should be seriously investigated as to why such deaths are occurring. Thus I urge the government to create a situation to find out the truth behind these deaths and it is essential for every former LTTE cadre to undergo a medical examination in order to evaluate their health conditions.

How do you assess the Consultation Task Force on Reconciliation Mechanism?
A: We are able to understand and feel the current thoughts of our people when they express their opinions on the task force. This task force should not only be a method to an immediate solution, but a long lasting solution. It should not be just be an eye wash. As we know all governments in the past have appointed many commissions thinking that those will be immediate solutions for problems. However, if we analyze the opinions of our people about the task force, they have so far expressed their grievances, openly. Such oral submissions will be confirmed on record. Therefore, their grievances and suggestions must be considered when preparing the final report. It shouldn’t be just suggestions of our people, but a part of the solution. Only then will democracy prevail. Suggestions of our people have been strong and clear, thus the government should take proper steps to implement their suggestions.

Also, I feel this will be a very good example to point out the instances when our people were cheated. At the same time as these oral submissions or suggestions are on record, there may be fewer chances to ignore them.

You are a Vanni District Parliamentarian, what is your stand on the Northern Economic Centre?
A: I have suggested locating the economic centre in Thandikkulam-Vavuniya. However later it was decided to build the centre in Omanthai. Although, I have given my suggestions I’m not ready to argue on this as the Northern Chief Minister C.V. Wigneswaran has reached a decision to build economic centres in two locations in the Northern Province. My main aim is that there should be investment in our region, therefore, we will pledge our support to the Chief Minister’s decision.

Some TNA members recently stated that militarization in the North has reduced compared to previous situations. Do you agree?

A: I would say militarization has remained the same, and similar to the days of the Rajapaksa regime. Military personnel numbers, in the North, have not been reduced, nor have the camps been removed. Some camps on private lands have been relocated, but have not been completely removed.

Recently an exhumation took place in Thiruketheeswaram-Mannar, where from a well, human remains were detected. How do you view this situation?

A: Previously when exhumations took place, previous to the recent one, in instances where human remains were detected, we already pointed out that there was a security point and a military camp in the vicinity. Many incidents have occurred in the past that is somewhat connected to the situation in Mannar. There were many who were abducted in vans and motorbikes, in the past, also there had been a military camp in the area. Therefore, we feel that these are human remains of our people.

Thus, the judiciary should act vigilant in this issue and medical analysis should be carried out with international involvement. We have faith in the judiciary.

Is it true that the fishermen of the Mannar District are the most affected due to illegal poaching by Indian fishermen? How do you assess the current situation?

Indian fishermen are well aware of fish breeding patterns in the Mannar seas and with the aim of grabbing all the resources these fishermen make use of trawlers. It is quite sad to say that apart from the fish, the trawlers catch even valuable species from the sea bed, which are of no use to the fishermen. Later the Indian fishermen only take the fish that is useful for their purpose and throw the small fish and the other sea species back to the sea.

At this rate, sometime in the future our fishermen will lose the opportunity of a reasonable livelihood; they will not be able to depend on fishing, if this situation continues.

Also the resources in the Mannar seas will be thoroughly destroyed and there will be no fish in the sea and our children will not even get to eat fish from our region.

Therefore, the Sri Lankan Government should not just leave the Tamil Nadu people and us to battle this issue out. When we met the Indian Prime Minister Narendra Modi, we emphasized that deep sea fishing must be enhanced, which will prevent fishermen crossing borders. It is essential to implement deep sea fishing which will decrease the issue between Sri Lankan fishermen and Indian fishermen. Therefore, my allegation is that the Mannar fishermen are the most affected due to illegal poaching by Indian fishermen in the Mannar seas.

In such a situation why do some TNA Parliamentarians claim that Kachchatheevu should be handed over to the Tamil Nadu Government in order to solve the fishermen’s issue?

At the same time Buddhist statues are being constructed in the Vanni District even after the injunction order by Court. There are actions being taken against Court orders, and the judiciary has ignored such actions. Mullaitivu has been thoroughly affected by the large number of land acquisition cases. We urge the President and Prime Minister to take stern action in order to control the situation. This government must remember that their victory depended on the large number of votes cast by the people from the North and East. Therefore, people believed that the present government will fulfil their demands, but now they are slowly losing the trust.

Therefore, the government must listen to their demands; they should take action to release the lands that can be released, its people’s lands and not State land. It is high time they resettle our people in their own land by releasing the land back to the owners. If the government fails to satisfy the needs of the people, they will repeat how they handled the previous government when they neglect the needs and expectations of the people.