International day against IMPUNITY: Investigate and take action on crimes against media and journalists in S. Asia 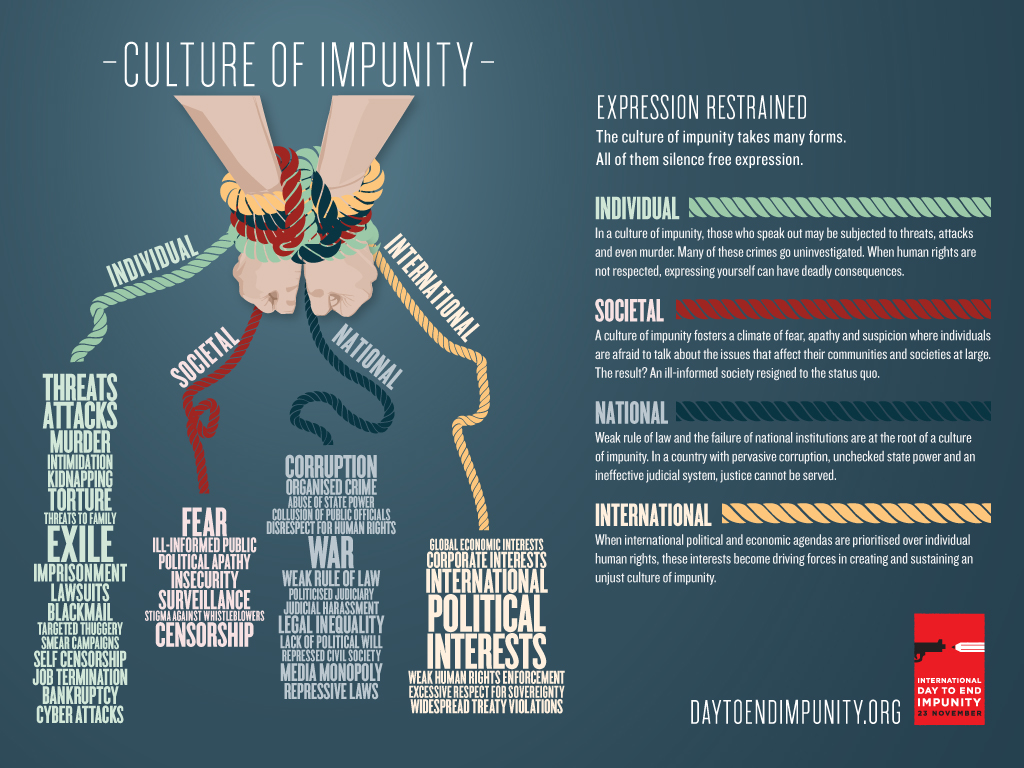 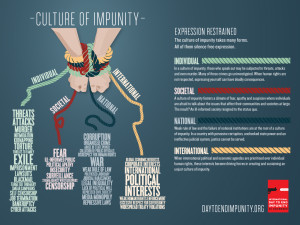 November 23 2012 is a day of action against impunity for attacks on journalists. This is a global observance which commemorates the thirty-two journalists killed in the Ampatuan massacre in Maguindanao province in the Philippines. It is also an occasion for the South Asia Media Solidarity Network (SAMSN) to take stock of the distressing reality of impunity in the region and resolve to combat it through country-specific, though coordinated action.

Journalists in South Asia are consistently faced with threats, intimidation and violence, and in extreme (though disturbingly common) cases, murder.  According to the latest estimation of the “impunity index” for the killing of journalists by the Committee to Protect Journalists (http://cpj.org/reports/2012/04/impunity-index-2012.php#index), five of the eight South Asian countries feature among the twelve with the worst record in failing to bring to justice the killers of journalists. The same compilation of data the previous year had an even more dismal story to tell: seven of the eight countries of South Asia featured in this list then.

Pakistan has had its impunity rating increasing rapidly and without break for the last four years. In many ways, the status of the country as one of the central staging posts of a global war has contributed to this rapid deterioration. Among the most traumatic events in recent times was the abduction and murder of the investigative journalist Saleem Shahzad in May 2011. This was also in many ways a key turning point for the struggle against impunity since Pakistan Federal Union of Journalists (PFUJ) and other professional groups, mounted an agitation in its immediate aftermath to secure the appointment of a judicial commission of inquiry.

The inquiry report, submitted in January 2012, observes how deeply traumatic the incident was. It was not just Shahzad’s family and the community of journalists that was left “in a state of shock”, but also “the public at large”, since the “net of suspicion was cast, amongst others, on institutions of the state itself”. On the basis of its extensive interviews and investigations, the Justice Mian Saqib Nisar commission concluded that “in all probability, the background of this incident is provided by the War on Terror”. This conclusion is warranted by the fact that as an “investigative reporter, Saleem’s (sic, Shahzad’s) writings probably did, and certainly could have, drawn the ire of all the various belligerents in the War on Terror – the Pakistani state, the non-state actors such as the Taliban and al-Qaida, and foreign actors”.

Though the Nisar commission failed to identify the agency responsible for Shahzad’s killing, its inquiries were valuable in highlighting how complex the struggle against impunity is likely to be.

The widespread sense of shock that followed Shahzad’s killing has not however, led to any material improvement in conditions for journalists. The IFJ’s record shows that in the eighteen months that have followed, no fewer than nine journalists have died in violent circumstances, mostly victims of targeted killings. The province of Balochistan, in the grip of an insurgency by elements seeking independence from the Pakistan federal government, has been an especially hazardous terrain.

In India, the areas of conflict remain extremely hazardous for journalists, but none more so than the north-eastern state of Assam, where twenty-one journalists have been killed in the years since 1990. Few of these cases have gone to trial, far less led to any manner of sanction against the perpetrators. In July 2009, the sole person to go to trial for the murder of Parag Kumar Das, an editor and widely respected public intellectual in 1996, was acquitted on all charges, with the trial court judge reserving special words of censure in his final judgment for the slipshod approach of the investigative agencies.

Some of the twenty-one cases identified in Assam may have been occasioned by causes other than journalistic work. But in several of them, such as Kamla Saikia, Indra Mohan Hakasam, Prahlad Goala, and most recently Raihan Nayum, there is evidence of the killings being motivated as revenge for particular news reports or for the editorial stance of the media outlet that the journalist worked for.

The ghastly 1997 killing of four members of the staff of Eenadu-TV, Gangadhara Raju, Jagadish Babu, Srinivas Rao and S. Krishna, in a bomb blast as they were leaving a film studio in Hyderabad city after recording a news report on a film under production, is yet to reach any kind of legal closure. It is believed that the journalists were not the primary target of the bomb, which was probably a murder attempt on the film producer, who was a former Maoist insurgent since come overground and active in mainstream politics.

Most recently, Umesh Rajput, a young reporter for a major Hindi language daily was shot dead near his home not far from Raipur, capital of the central Indian state of Chhattisgarh. Rajput’s family and the local journalists’ unions are convinced that a report published just days before under his name, on a case of medical negligence leading to a woman’s death, was the principal motive for his killing. Despite evidence that has accumulated since then, pointing to the possible involvement of a local doctor and a political activist who had other reasons to resent the journalist’s work, there have been no arrests made or charges laid in the killing.

In Sri Lanka, a commission appointed with a presidential mandate recommended that cases of journalists being attacked during the country’s quarter-century long civil war be investigated and prosecuted as part of the national reconciliation process. There has however, been no indication of an effort being made in that direction. Journalists who have been seeking to report on the status of the war displaced and the faltering efforts to resettle them have faced obstruction and harassment from state agencies and the security forces.

None of the murders or disappearances of journalists that caused widespread distress in the country has been investigated, far less brought to trial. This goes for the January 2009 murder of Lasantha Wickrematunge, the campaigning editor whose work on official corruption earned worldwide recognition and the January 2010 disappearance of cartoonist Prageeth Eknaligoda.

Plans by Sri Lanka’s journalists to observe a “black month” in January 2012 to mark the many traumas that the profession has faced in that month, were met by verbal threats over the government-owned media and outright physical intimidation. Reconciliation remains a distant prospect and impunity a seemingly ingrained element of the political culture in Sri Lanka.

In Bangladesh, journalists Sagar Sarowar and Meherun Runi, a married couple, were murdered in February 2012 in their residence in the capital city of Dhaka. Despite frequent assurances from top police officials and government ministers that the case was on the verge of being solved, there has been little by way of clarity on the motives for the murder. A number of suspects have been arrested but in recent weeks, the Rapid Action Battalion – the security agency that was entrusted with the investigation despite its main competence being anti-terrorism operations – has been interrogating the couple’s six-year old son who was the first to discover the murder. Despite being under the same roof at the time the crime occurred, the young boy was asleep and only came to know of it the next morning. The interrogation to which he has been subjected has been widely deplored as deeply insensitive and a needless harassment of the bereaved family.

Journalism suffered serious assaults during Nepal’s decade long Maoist insurgency, leading to self-censorship as the norm. The abuses of this period remain to be addressed in a spirit of truth and national reconciliation. In terms of the threats and violations that persisted even after the Comprehensive Peace Accord of November 2006, the ordinary law of the land has been held appropriate by the Supreme Court. Among these are the killing of Prakash Thakuri sometime after his abduction from the western district town of Mahendranagar in July 2007; Birendra Sah, abducted in October 2007 from his home in Bara district of central Nepal and believed killed soon afterwards; J.P. Joshi, missing since September 2008, whose remains were found in a thickly forested region of western Nepal two months afterwards; and Uma Singh, murdered in her home in Janakpur in the southern plains in January 2009.

These partial gains in dispelling the climate of impunity have to be assessed against the continuing obstacles in the way of securing justice for Prakash Thakuri and J.P. Joshi.

On this day of global observance against impunity, we the unions of journalists in South Asia, resolve to closely monitor the progress of several of these key cases and ensure that justice even if long delayed, is not entirely denied.