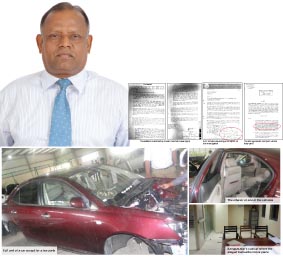 Controversy surrounds the arrest, under dubious circumstances, of Kanagasabai Ranjan, Director (Preventive), Prevention Division Directorate, Sri Lanka Customs on bribery charges. The Joint Customs Trade Union Alliance (JCTUA) claims that it is an attempt to get rid of an honest official who has always enhanced custom revenue in billions of rupees.
Kanagasabai was to be appointed Additional Director General of Customs on January 11, 2013 but was deprived of the promotion on January 3 – just one week before his promotion. He was arrested on Thursday, January 3, 2013 for an alleged bribery charge for accepting Rs.1 million to release containers of cars as full units.

According to JCTUA sources, Kanagasabai was one of the straightforward Customs officers who could not be bought for money and has shown his juniors how to perform their duties without prejudice, by example.
“If you speak to any Customs employee you will be able to get a clear picture as to what type of person Kanagasabai is. They will also tell you how he has enhanced customs revenue in billions of rupees. Amongst all the detention and prevention work he has carried out since he joined Sri Lanka Customs there are many cases where Kanagasabai has worked fearlessly to increase customs duty and fines,” added JCTUA sources on condition of anonymity.

For most of the Customs employees, the arrest of Kanagasabai under doubtful circumstances has become an eye opener – not to be honest in future as they presume that there is no future for an honest employee as the ultimate end would be prison.
According to them, Kanagasabai was not foolish to accept a bribe in his office, which is a glass cubicle. They further added that the affidavit submitted by Shiran Duminda Subasinghe of 191/ 8A, Maladolawatte, Kadawatha who was an eye witness to the bribery ‘drama’ is a clear indication as to how Harsha de Silva of Vehicles Lanka (Pvt.) Ltd, Industrial Park, Minuwangoda fixed Kanagasabai for an offence that was not committed.

Subasinghe’s affidavit dated January 5, 2013 has clearly described how Kanagasabai called Harsha de Silva to his office while he (Subasinghe) was seated in front of the Director.

The affidavit further states, ‘While I was at Kanagasabai’s office to discuss my appeal, Director Kanagasabai called one Harsha who was seated in front of his office. While entering the Director’s office, Harsha shouted at the Director in anger asking, ‘won’t you allow me to do my business’. In the meantime I clearly saw how Harsha turned the files he was carrying towards the ground and let a small white parcel that was hidden amongst the files fall on to the ground. Since both the Director and Harsha were having a heated argument I walked out of the room. No sooner I came out, two people who were seated outside the Director’s office rushed into the room followed by a few others. Then the Director came out with Harsha and the others. I also noticed a person in a pair of blue trousers and white long sleeved shirt putting the white coloured parcel that Harsha had dropped, into his trouser pocket. I also clearly heard Harsha yelling at Director Kanagasabai saying, ‘this wouldn’t have happened if you had acted appropriately’. In turn the Director raised his voice saying, ‘I have always discharged my duties appropriately’”.

Meanwhile, sources described how Kanagasabai was praised by his superiors when he increased the annual customs revenue after he was sent to the Biyagama Free Trade Zone Customs Unit.

“At the time Kanagasabai was sent to the Biyagama FTZ in 1996, the annual revenue of the Biyagama Customs Unit was Rs.12.463 million. The following year the revenue was Rs.17.668 million. This was at the time Kanagasabai had learnt that the garment factories were selling their products in the open market instead of exporting them in order to make profits. Since it is an offence to sell products meant for export in the local market as they had been given duty concessions, Kanagasabai wanted all these factories to pay the customs duty on all the products sold in the local market. As a result in 1998 the annual customs revenue at the Biyagama Customs Unit rose up to Rs. 417.984 million. In 1999 this increased further and the State earned Rs. 537.834 million. Kanagasabai was highly commended for his excellent performance and the commitment he has displayed by the then Director General Customs W.D.L. Perera. This letter of appreciation is in his personal and office files,” the sources said.
The sources further elaborated on how Kanagasabai was able to detect cigarettes and illegal alcohol that were smuggled into the country and how the Customs Department could generate millions of rupees in revenue.

“When he was the Assistant Director of Customs in the Revenue Task Force Unit, he had detected many containers full of cigarettes that were smuggled into the country. Even while knowing that underworld kingpin Pottu Naufer was behind this racket, Kanagasabai still carried out his work leading from the front, even risking his life. As a commendation all the officers involved in detections are rightly rewarded. Since Kanagasabai and his team were able to help out Ceylon Tobacco Company (CTC) by seizing smuggled cigarettes, the CTC too rewarded these officers handsomely. This was the same when he detected containers of illegal alcohol that were smuggled into the country. Since Kanagasabai was seizing one container after another he got threats to his life to which he had to lodge a complaint. As a result the Defence Secretary instructed the then IGP to assign two police officers for his protection,” added the sources.

According to terms of Section 17 of the Board of Investment of Sri Lanka Law No. 4 of 1978, the BOI came to an agreement with Harsha de Silva to set up/ conduct and operate a business to assemble vehicles with secondhand body parts for the local market.

Although this was the agreement, de Silva did not import car parts, rather full units minus the engines, gearboxes and axles. These parts were bought in separate containers.

“When an investigation begins neither the Director General nor the Additional Directors General, Director of Customs, Deputy Director of Customs or the investigating officers bring relief to the fraudulent party. In this instance, Kanagasabai’s superior officer the Director General Customs has given instructions that a full report should be forwarded to him and Kanagasabai’s junior officers too had complied and given a full report on how Harsha de Silva’s consignments were detained as the contents were undervalued, undeclared and in excess. The report states that the consignments were full units of vehicles (except for the engines, gear boxes and axles) that were imported declaring them to be vehicle bodies. In such circumstances there is no possibility at all to hide the issue and bring relief to the fraudulent businessman Harsha de Silva by obtaining a bribe,” claimed the sources.
Citing an example, sources said how a junior officer had to take legal action against the then Director General Customs S.M.J. Senaratne for trying to give relief to a fraudulent businessman in 2000 (S.M.J. Senaratne vs. Bangamuwa Case no: CA 259/ 99) resulting in the DG being sacked from his post.

They further accused the Bribery Officers of contradicting their statement when Kanagasabai was produced in court soon after his arrest.

“This conspiracy was well planned and the bribery officials who arrested our Director were so smart to take him out of office immediately without wasting even a minute. When Kanagasabai was produced in court after the arrest, the bribery officials said that they found the parcel of money in the third drawer. However this was not mentioned in the ‘B’ report that was produced in court later. If they said that the money was found in the third drawer why couldn’t they have put it on record in the ‘B’ report? That is why our Union says that this was a well planned conspiracy to get rid of an honest official who would go to any extent even putting his life in danger to discharge his duties by the Customs Department,” claimed the JCTUA sources.

They added that, there are more than two court cases filed by the Customs Department against Harsha de Silva. He was found guilty of importing full units when he had been given permission to import only spare parts. It is surprising as to how and why de Silva was allowed to continue to import spare parts even though he had been found guilty of violating import control regulations. In such an instance de Silva’s license should have been revoked; instead despite the court orders he was allowed to continue the same racket.
SL