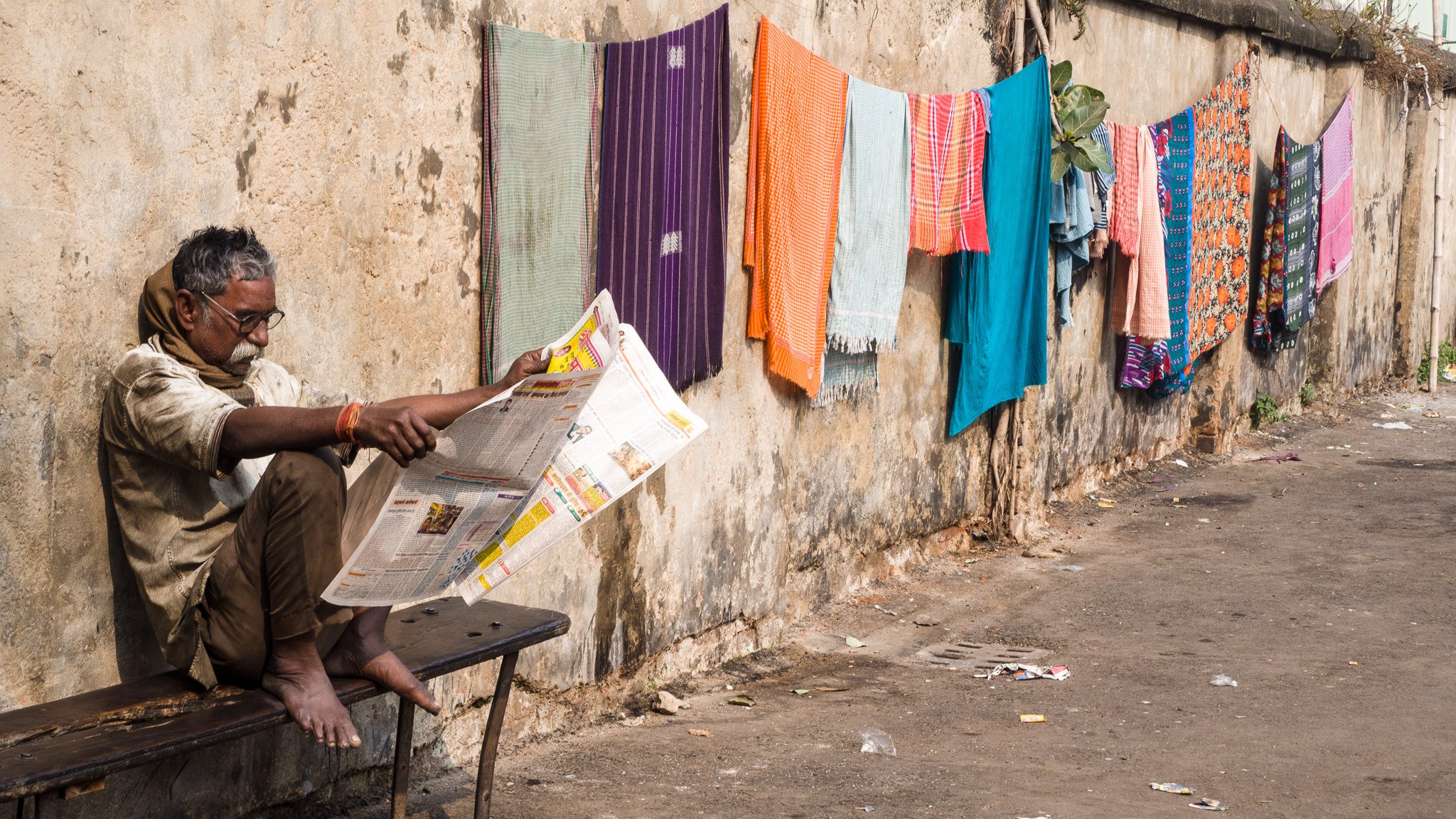 Image:The media is meant to report the truth, but the structure and vested interests of the Indian press have stopped that from happening.
The daily dose of news. Credit: Mike Prince/Flickr CC BY 2.0

James Madison famously argued that “the advancement and diffusion of knowledge is the only guardian of true liberty”. Seen in this light, the media performs three crucial functions in society: it gives a voice to the voiceless, creates a forum for a dignified dialectic and constructs an agenda to produce democratic and progressive outcomes. To do justice to these responsibilities, it is imperative that the media report the truth objectively and portray a diversity of issues and opinions.

Unfortunately, the media in India has succumbed to misinforming to manufacture consent, tabloidisation for higher revenues and even creating or exacerbating societal tensions. Whatever the raison d’être for this sordid state of affairs, the upshot is that the media is either managed (by incentives to the channel or to specific journalists) or censored (by interference in content or outright suppression).

Censorship can be both internal and external. Internally, senior decision makers within a media organisation suppress or bypass credible stories because they have been personally compromised (by external influences) or because of their personal biases and interests (including but not limited to the hope of personal advancement). Externally, the media faces pressures from corporate or political ownership and from the government. Corporate and political ownership of media houses forces them to operate as profit-making or propaganda ventures. They no longer function as sources of truth, instead becoming mouthpieces for vested interests. Unfortunately, the complete lack of transparency in such ventures makes it nearly impossible to analyse the contractualisation of news in further detail.

On the other hand, it is easier to understand how governments coerce media outlets to dilute, self-censor or redact what is perceived to be objectionable. Factually, government advertisements form nearly 50% of the total volume of advertisements to an established newspaper. A Supreme Court committee has highlighted how governments (mis)use their publicity budgets to further their partisan interests. Consider the manner in which money was allocated by the government last year: 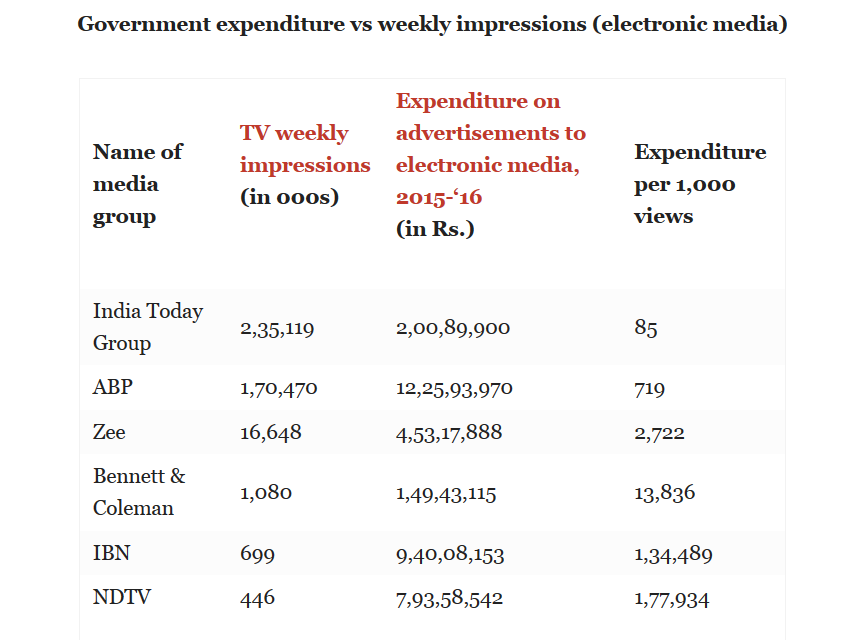 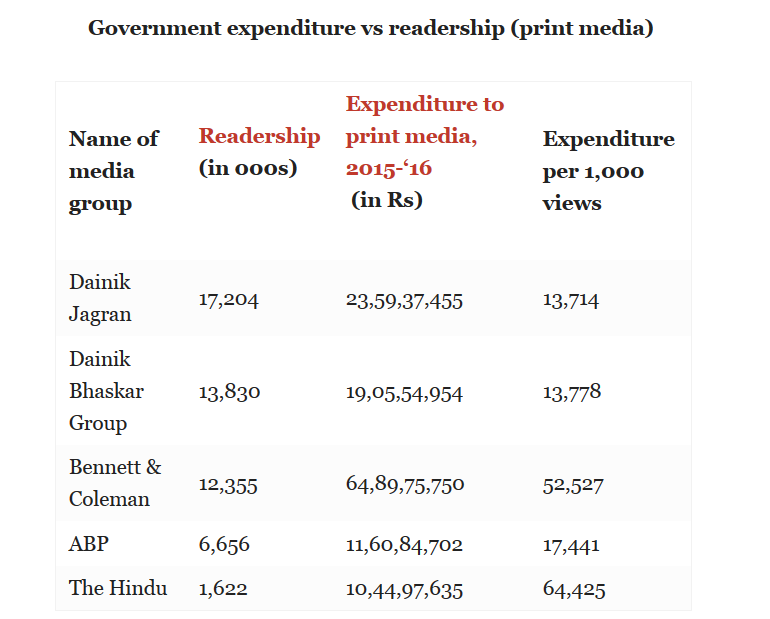 As is evident from the tables, a media outlet’s public reach is not the yardstick for government expenditure. Even though India Today and ABP (electronic news), and Dainik Jagran and Dainik Bhaskar (print media) outperform others in terms of viewership and readership, a higher proportion of government advertisements are routed towards other outlets. No grounds have been specified for this differentiated disbursal, which certainly raises questions of propriety and hints towards selective patronage.

Where the carrot of advertising budgets fails, the stick of regulation is used to muzzle individual journalists as well as media outlets. As a recent report has highlighted, 2015 witnessed over 41 cases of censorship, 48 cases of defamation, 14 cases of sedition and eight cases of surveillance against individual journalists. Conversely, the recent ban on NDTV India exemplifies how media outlets are silenced. Such issues routinely occur because the government reserves the exclusive power to decree what is and is not in sync with the nation’s (or to be more accurate, the government’s) interests and hence arbitrarily expurgates programme content. This is especially problematic because an individual’s or civil society’s interests are often not aligned to those of the government. For example, the government may seek to mine in a sensitive area, something civil society may not necessarily endorse because of ecological or social concerns.

When that doesn’t work, non-state actors (and sometimes even the state apparatus, as in Chhattisgarh) are deployed to intimidate journalists or even inflict violence. The mysterious deaths of reporters covering the Vyapam and mining scams in Madhya Pradesh are just some of the many instances of inconvenient media coverage being excised through violence. According to a Press Council of India report, 80 journalists and five media persons have been murdered in India since 1990 (by May 2016, this had increased to 94). It is no surprise that India ranked a lowly 133 out of 180 countries in the World Press Freedom Index.

There is therefore an urgent need to protect journalists, while ensuring that the media as a whole functions objectively and adheres to journalistic ethics. Unfortunately, the present Press Council of India is wholly inadequate for several reasons. Its mandate is limited to only the print and not to the electronic, online or broadcast media; it has no powers to enforce its orders; it has powers to adjudicate, but usually resorts to mediation to placate vested interests; it has no role in shaping, furthering or implementing journalistic standards; and it has no powers to impose fines or penalties or take any action against offenders. Furthermore, numerous self regulatory agencies (News Broadcasting Standards Authority, Broadcast Editors’ Association, Advertising Standards Council of India and others like them) have proved to be weak and ineffective.

This regulatory vacuum has exacerbated the rot in the profession and incentivised interference from the government and nefarious corporations (who both resist accountability). It is therefore important that an empowered constitutional body which would oversee, protect and regulate journalists and media houses be institutionalised.

The advantages of such a body would be multi-fold. Being a constitutional body, it would be comparatively more immune from extraneous influences. Its membership (which should ideally include a retired Supreme Court judge as chairperson, a retired civil servant, two civil society activists and two members each from the print, electronic and online media) would require cross party consensus, and any alteration in its structure would necessitate a two-thirds majority in both houses of parliament.

This council’s oversight would cover electronic and online media organisations, on the lines of the Norwegian Press Council. Third, it would have a vastly expanded mandate and the powers of a civil court. Not only would it be able to take suo moto action, it would also be able to penalise and recommend action against offenders. The body will also have the power to regulate the excessive concentration of media outlets (print, electronic or online) with any one corporation. In addition, it would be able conduct periodic audits of the media, especially to ensure that its freedoms, ethics and standards are not impinged upon. These audits would have to be placed before parliament and mandatorily discussed by the concerned standing committee.

Finally, it is important to preserve a balance between protecting the media’s independence and regulating its excesses. The council may unsettle this delicate balance. Therefore, to ensure adequate safeguards the council’s yearly report could be voted upon by both the houses of parliament.

Penultimately, the aim of the media is to function as a nation’s conscience keeper. Unfortunately, it has been found utterly wanting in this regard, for which there are those who are more liable. However, it is equally true that all of us are somewhat responsible for the media’s perversion by being mute bystanders to the suppression of the truth. Without the truth, we have no way to reflect on or remedy the ills that plague our society. As a nation, if we are to keep rising to ever greater heights, we must embrace the truth, no matter how bitter or uncomfortable. Under the current socio-political climate in India, this is all the more essential. As George Orwell once said, “in a time of deceit, telling the truth is a revolutionary act”.

Pushparaj Deshpande is currently an analyst with the All-India Congress Committee. He has worked on legislation and policy with various MPs.
http://thewire.in/83983/constitutional-press-media-freedom/