Instead people are ignored, actively persecuted, and the human rights defenders are intimidated, threatened, and persecuted as well 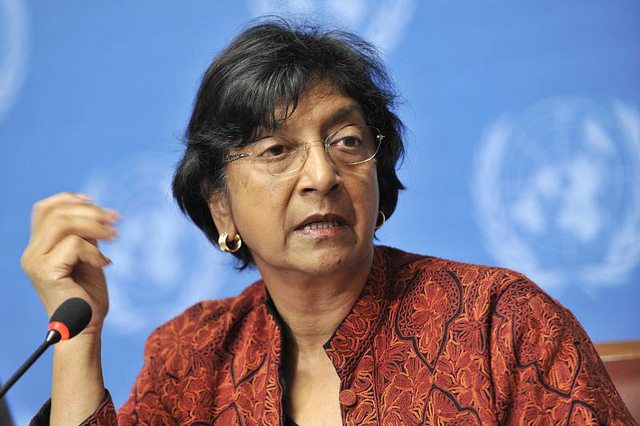 Statement by the UN High Commissioner for Human Rights Navi Pillay on Human Rights Day – 10 December 2012
Millions of people have gone on to the streets over the past few years, in countries all across the world, emboldened by what is happening elsewhere, some demanding civil and political rights, others demanding economic, social and cultural rights.
This groundswell is not simply a question of people demanding freedom of expression and freedom to say what they think and make clear what they want.

They are asking for much more than that. They are asking for an end to a situation where governments simply decide what is best for their populations without even consulting them. They are asking for their right to participate fully in the important decisions and policies affecting their daily lives, at the international, national and the local levels. Many people in many countries have been making it clear they are fed up with their leaders treating them with disdain and ignoring their needs, ambitions, fears and desires.

They have been, in effect, asking for what has been, for more than sixty years, under international law, rightfully theirs. They have been asking for the human rights laid down in the Universal Declaration of Human Rights – which is commemorated every year on 10 December – and subsequently fleshed out in other binding international treaties.

Every citizen shall have the right and the opportunity to take part in the conduct of public affairs, directly or through freely chosen representatives. Every person shall have the right to vote and be elected, and to have access to public service, as well as to free expression, assembly and association. These are among the rights enshrined in the International Covenant on Civil and Political Rights, to which 167 States are party. And they have been restated in many similar ways in other laws and documents.

These rights are supposed to apply to everyone. No one should be excluded from any of them because they are female, belong to a minority, or worship a certain religion; or because they are gay, have a disability, have particular political beliefs, are migrants or belong to a certain racial or ethnic group. We all should have a voice that counts in our societies. We should all have free, active and meaningful participation in both economic and political affairs.

Instead they are ignored. Or, worse, they are actively persecuted, and the people who are trying to help them gain their rights – the human rights defenders – are intimidated, threatened, and persecuted as well. Sometimes, it is less deliberate, more insidious: certain individuals or groups are simply not given the opportunity: the opportunity to raise their voice, or use their brains and talents to achieve the successes of which they are capable, to climb out of poverty or achieve high office – or even any office.

Many millions of people cannot even dream of aiming high, they just dream of getting by – of surviving until tomorrow.

Or it may be because they are specifically excluded from seizing opportunities by discriminatory laws or practices. Or because, through no fault of their own, they are stateless, citizens of nowhere, and therefore not only do not have a voice, but do not officially exist.

Or it may simply be because their leaders are so focused on their own grip on power and wealth that they simply don’t care what happens to those whose lives they govern. They’ll give just enough to keep people quiet and stop them protesting. If they are obstinate and raise their voice, they will lock them up, torture them or find other ways to distract them, silence them or make them disappear.

But in the past two years, people in many countries have raised the stakes, and made it clear that “just enough” is no longer good enough. In many countries, they have confronted their governments head on, not just in the Middle East and North Africa, but in other parts of the world as well, on issues covering the full range of fundamental civil, political, social, cultural and economic rights.

In a number of countries in recent months, we have continued to see the most extreme examples of rights being trampled underfoot. Many thousands of men, women and children tortured to death, raped, bombed, shelled, shot, forced from their homes, deprived of food, water, electricity and health care by their own governments or by armed groups, apparently intent on nothing more than their own hold on power. These are governments and non-state actors who are continuing to behave in a way that is the complete antithesis of everything we celebrate on Human Rights Day.

Today, I salute all those who have suffered so much seeking what is rightfully theirs, and all those people in other countries who in their own way – whether it is in Santiago or Cairo, Athens or Moscow, New York or New Delhi – are also saying we have a voice, we have our rights and we want to participate in the way our societies and economies are run.

Because that is how it should be.