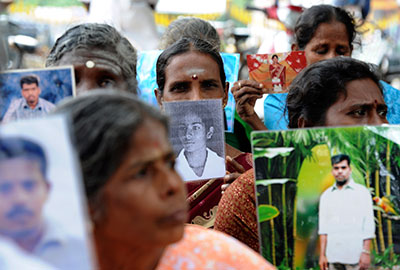 New York-The Committee to Protect Journalists today called for the immediate release of an Indian journalist and filmmaker who was arrested in Sri Lanka on Wednesday while allegedly filming and photographing a military base.

Tamil Prabhakaran was arrested by Sri Lankan security forces in the northern Kilinochchi district and is undergoing an investigation by the island nation’s Terrorist Investigation Department on charges of violating visa regulations and taking pictures of a military installation, The New Indian Express reported.

Sri Lankan officials were cited in news reports as saying Prabhakaran arrived in Sri Lanka on a visitor or tourist visa but was seen interviewing pro-Liberation Tigers of Tamil Eelam (LTTE) politicians and taking photographs of army check points and military installations.

Sri Lankan parliamentarian S. Sritharan, who was accompanying Prabhakaran, told The Times of India that they had not gone to military installations and that these could not be filmed in any case, as the sites are not accessible. He said the journalist was manhandled and threatened by the security forces.

Prabhakaran, who is a contributor to Junior Vikatan, a Chennai based Tamil-language magazine, was working on a documentary about the plight of Sri Lanka’s Tamil population, according to international news reports.

“Sri Lankan President Mahinda Rajapaksa continually insists that his administration has nothing to hide, yet time and time again, we see authorities harass and intimidate journalists in an effort to prevent them from doing their work,” said CPJ Executive Director Joel Simon. “Sri Lanka should release Tamil Prabhakaran immediately.”

The Indian mission in Colombo is seeking access to the journalist, reports said.
Last month, Sri Lanka detained two visiting journalists just days before the start of the Commonwealth Heads of Government Meeting. Sri Lanka has come under criticism by the international community for its systematic harassment of journalists.

Photo: Sri Lankan Tamils hold pictures of family members who disappeared during the war between government forces and the Liberation Tigers of Tamil Eelam at a protest in Jaffna on November 15. (Reuters)