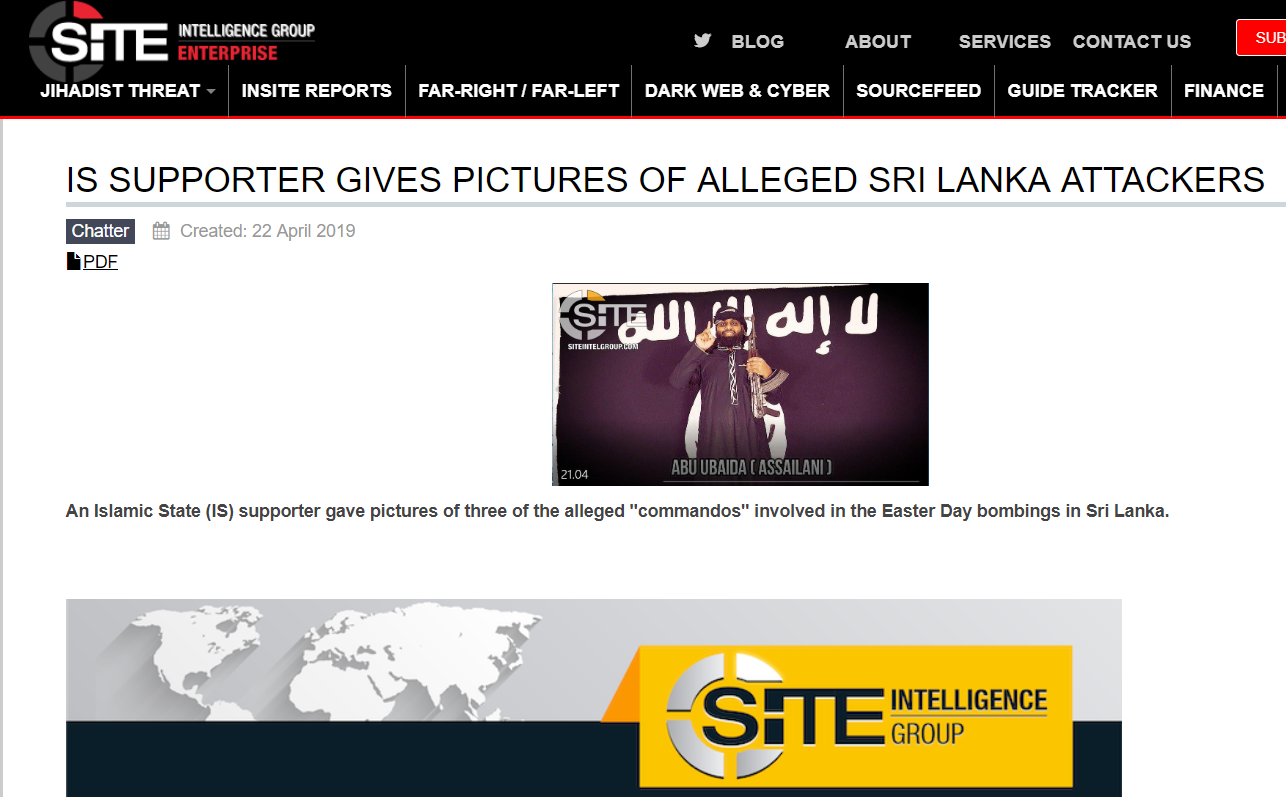 The National Thowheeth Jamaath (NTJ), the little-known group blamed for the bombing of churches and hotels in Sri Lanka on Sunday, appears to have been inspired by Islamic State (IS) though direct links between the two are yet to be established, people familiar with developments said on Monday.

India is helping Sri Lanka probe the attacks with “technical and intelligence” support, and Indian security agencies are watching a Tamil Naidu-based cleric, the people said.

The attacks by suicide bombers, which killed 310, had all the hallmarks of the IS that has targeted Christians on their holy days, experts and security officials said. Since May last year, IS has claimed responsibility for attacks on churches in Indonesia and the Philippines.

PM Modi addressed a rally in Rajasthan’s Chittorgarh. He expressed his condolences to families of victims in Colombo blast.

The NTJ was formed in Kattankudy, a Muslim-dominated town in eastern Sri Lanka, in 2014. Its founder Zahran Hashim alias Abu Ubaida is believed to have been the suicide bomber who targeted Shangri-La Hotel with military grade explosives.

A video released by Al Ghuraba Media featured the seven suicide bombers allegedly involved in the attacks. Except for Abu Ubaida, the others had their faces covered and the video had messages in Arabic and Tamil. A caption in the video read “O Crusaders, this bloody day (21-04) is our reward to you”.

Though some quarters in Colombo felt the bombings were in retaliation for the March 15 Christchurch mosque attacks, the people cited above said it was believed the NTJ had been planning the attacks for over three months.

Indian counterterror experts described the NTJ as a self-radicalised Salafi group inspired by the IS, though a link between the two is yet to be established. They said a number of Sri Lankan Muslims who recently flew back from Qatar had been arrested for their alleged role in the bombings.

An intelligence officer, who requested anonymity, said the attacks couldn’t have been possible without months of planning and international players travelling to Sri Lanka to take part in the execution at different stages.

According to SITE Intelligence Group, which monitors jihadi groups, IS supporters were celebrating the attacks, and one supporter had released photographs of three attackers, calling them “commandoes”.

India’s National Security Advisor Ajit Doval too spoke to the Sri Lankan leadership. However, given the political sensitivities, India will provide only backend support rather than being proactive in bringing the terrorists to book, the officials said.

India had also provided “operational grade intelligence” to Sri Lanka on an imminent attack by the NTJ on April 4, they said. Sri Lanka’s focus has been on preventing any revival of Tamil separatism and this was perhaps why Colombo hadn’t taken New Delhi’s warnings seriously, they added.

The officials said Indian security agencies had alerted Sri Lanka that another NTJ team led by Jal al-Quital alias Rilwan Marzag could carry out more attacks. Noufar Moulvi, brother-in-law of Hashim, recently returned to Sri Lanka from Qatar and had taken charge of the group, they added.

The Tamil Nadu-based cleric under watch by security agencies and the Tamil Nadu Towheed Jamaat (TNTJ) do not have any direct links with terrorism, officials said. “They have no links acts to terror but we have reason to believe that they contributed to radicalisation,” an officer said.

The TNTJ denied any links with the Sri Lanka-based group.“We do not have any association with any Towheed of any other state or country. We are an independent organisation,” said TNTJ general secretary Abdul Rahman.