India wants 13A and beyond;Land powers to PCs – Senathirajah 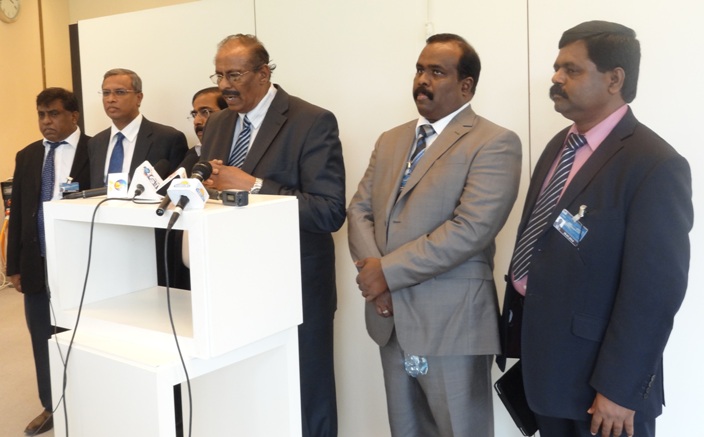 [Senathirajah speaking to press at UNHRC , March 2014;Photo: SD]
Tamil National Alliance (TNA) Parliamentarian and senior Tamil politician Mavai Somasundaram Senathirajah, who is expected to succeed R. Sampanthan, as the Ilankai Tamil Arasu Katchchi (ITAK) leader, at the Party’s annual general meeting this week in Vavuniya, speaks to Ceylon Today on the TNA’s recent talks with the Indian Prime Minister Narendra Modi in New Delhi. Senathirajah also expressed the readiness of the Tamil National Alliance to hold direct talks with the government as far as the chauvinist forces do not mess around in finding a durable solution.

Excerpts of the interview:

A: The meeting was encouraging. It has given us hope and enthusiasm towards settling our political problems. Prime Minister Narendra Modi was very sympathetic in regard to the humanitarian issues which remain unsettled in the North and East. The Indian Prime Minister, who is very much concerned about our problems, had emphasized that the North and East issue in the island must be settled in a manner where Tamils could live in peace with dignity. India’s role in settling our issues remains inevitable. Earlier, the Congress Government didn’t give much emphasis to dealing with our problems. However, during our meeting with Prime Minister Narendra Modi, we realized that he would take meaningful steps on his part in dealing with our problems.

Q:Prime Minister Narendra Modi has categorically said his Government would focus on the implementation of the 13th Amendment. How do you see his stance with regard to the Amendment?

Q:Whoever comes to power in India emphasizes on the implementation of the 13th Amendment. However, do you think that the Indian leaders do not get into action and they only keep on mentioning about the Amendment?

A: Yes, of course the Indians have been emphasizing on implementing the 13th Amendment. But we feel they should ensure that the Lankan Government is doing everything to implement the Amendment and enhance it further. We know of the efforts put in by the Indian Government in the past to see the success of the 13th Amendment. However, the changes in the political situations in both countries didn’t create the right atmosphere to fulfil the political aspirations of the people in the North and East. However, now we see a stable Government in India, under the leadership of Prime Minister Narendra Modi. Therefore, the Indian Government is now in a better position to ensure the devolution of powers to the North and East by discussing with the Lankan leadership.

A: Our leader R. Sampanthan explained the TNA’s stance with regard to the PSC. The TNA participated in the talks with the government in January 2011. Later in 2012 the government withdrew from the talks with the TNA. We had submitted our proposals with regard to the Parliamentary Select Committee. But the government is not prepared to make a genuine effort to resume the talks. We have told Narendra Modi as long as the extremists’ elements in the ruling UPFA take the upper hand, meaningful efforts could not be taken in dealing with our political issues. There are several hardcore political parties in the PSC. They will definitely flex their muscles to cripple whatever the attempt made to solve the problems. Even in the past they prevented the efforts taken to reach amicable solutions. Therefore, we are not prepared to sit and talk with the parties with extremist views. We told Narendra Modi that we are prepared to hold direct talks with the government. But not in the presence of those who spoil the efforts. The Indian leader understood clearly the stance taken by the TNA with regard to the PSC.

Q:The TNA delegation had even pointed out the alleged land acquisition carried out in the North and East. What was the response from the Indian Prime Minister?

A: The Indian Prime Minister is of the view that the land powers should be devolved to the Provincial administrations. Several thousand civilians had been displaced following the intensity of the civil war in the North and East. Around two hundred thousand Lankan Tamil refugees are still living in 115 refugee camps in South India. The Lankan refugees in South India and the Internally Displaced civilians from the North and East are still struggling to get back to their original places.

The Lankan Government, with the help of the Security Forces, is grabbing the lands to put up new military installations and strengthening the presence of the armed forces in the North and East further. The Indian Government expects the safe return of the Lankan Tamil refugees in South India to their original places. Therefore, to pave way for their return to the island and for them to begin their new life in a secure atmosphere, the Indian Prime Minister agreed with us on putting a halt to the land acquisition and reducing the military presence in the North and East.

A: The 13th Amendment paves the way for devolving police powers to the Provinces. The Indian Prime Minister stated that the police powers should be devolved to the provinces like in the Indian States to maintain law and order at regional level. Without the police powers it will be difficult for the Provincial administration to deal directly with any adverse situation in the region. At present in the North, despite the overwhelming victory, the TNA led Provincial Council administration is still not in a position to execute its powers in a meaningful way. The important powers have been vested in the Governor.

Instead of allowing the Provincial Council to function independently, the Central Government is running a parallel administration through the Governor. The democratically elected Chief Minister C.V. Wigneswaran, with his vast experience in the constitutional affairs, as well as in handling the law and order situation, remains a powerless figure in governing the Northern Province. When we informed the Indian Prime Minister about the difficulties faced by the Northern Chief Minister in administering the province, he expressed his willingness to have direct talks with Chief Minister Wigneswaran.

Q:Minister Prof. Tissa Vitharana, commenting on the TNA’s visit to New Delhi, stated that the TNA need not to go to India seeking a political solution, but should talk directly with the government. How do you see?

A: Well, I am surprised to hear that comment from Prof. Vitharana. We all very well know that Minister Vitharana’s efforts, through All Party Representative Committee (APRC), to explore the ways and means to find a political solution for the ethnic issue have been a failure. The findings and the resolutions of the APRC have been shelved. Prof. Vitharana and his leftist colleagues are very much aware of the attitude of the chauvinist elements in Lankan politics. On and off they had even spoken in favour of fulfilling the political aspirations of Tamils. They know very well the efforts taken by India to solve our problem. So we approached India when we failed to continue with our efforts in finding a political solution. When Prof. Vitharana is not in a position to push his APRC proposals being a senior minister in the government to find a solution, how come he comments on the efforts taken by the TNA, such as seeking Indian assistance to solve our problems?

A: Well, we didn’t want to waste our time by talking about a person who the TNA considers an absolute clown in Indian politics. Subramaniam Swamy is clinging on to the Modi and Rajapaksa Government for his personal survival. His comments do not reflect the stance of the Indian leaders who are genuinely concerned about the Lankan Tamil issue. So knowing very well the capacity of Dr. Subramaniam Swamy, we didn’t bother to talk anything about him.

Q:The UPFA General Secretary and Minister Susil Premajayantha had, at a press briefing in Colombo a few days ago, indicated the government’s willingness to hold direct talks with the TNA. A couple of weeks ago Economic Development Minister Basil Rajapaksa also said that if the TNA was not willing to attend the PSC, the government should go for an alternative arrangement to approach the TNA. How do you see those comments?

A: First of all, I would like to say that the TNA is for a durable and a constructive political solution to the Tamil crisis. We have been supportive of whatever genuine attempt has been made towards settling our issues. We are even forever ready to have talks with the government. But we don’t want to be taken for a ride. If the government makes any genuine attempt to have direct talks without allowing the chauvinist forces to take the upper hand in dealing with our issues, we would definitely come forward for talks. The government cannot dictate terms to us on where to go and what not to talk. We want peace with justice and dignity for our people. So we are prepared for any genuine attempt to find a political solution for our people.

Q: The ITAK will hold its Annual General meeting in Vavuniya this week. You are most likely to succeed R. Sampanthan as the new leader of the ITAK. What have you got to say on your new role?

A: The ITAK is the flag ship of the Tamil National Alliance. It was founded by late S.J.V. Chelvanayagam 64 years ago in 1950. Several icons such as Wanniasingham, E.M.V. Naganathan, Rajavarothyam, Rasamanickkam, A. Amirthalingam and Kathiravetpillai had strengthened the party as a formidable force towards winning the political rights of the Tamils. The present leader R. Sampanthan has done a remarkable service as the leader of the ITAK in the recent past.

Therefore, I will also follow the footsteps of my predecessors and continue to strengthen the party while remaining firm to win the political rights of our people.