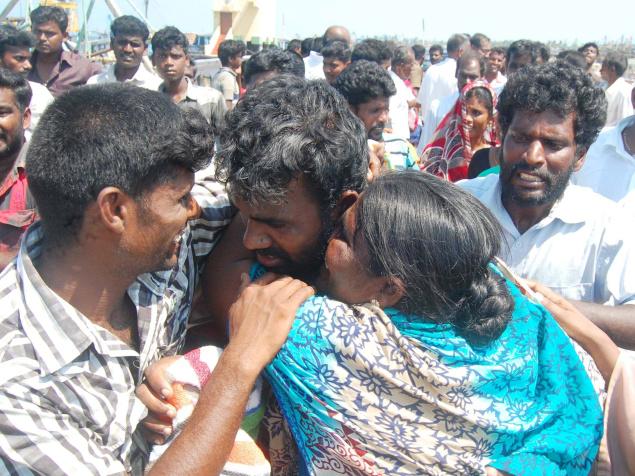 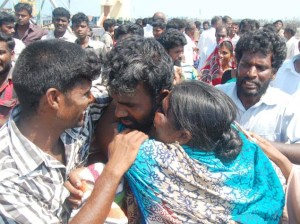 The Hindu This April 12, 2013 photo shows an emotional reunion at a Rameswaram fishing jettly where a batch of fishermen arrived after their release from Sri Lanka. On Wednesday, India formally raised the issue of its fishermen languisihing in Sri Lankan jails.

Currently there are 114 Indian fishermen and 21 fishing boats in Sri Lankan custody.

Sri Lankan High Commissioner Prasad Kariyawasam was summoned to the South Block on Wednesday and a formal démarche made against the large number of Indian fishermen languishing in Sri Lankan custody for periods up to two months.
The démarche reflected India’s exasperation over the absence of any movement on the release of the fishermen despite several high-level interventions.
It was also pointed out that the delay in their release not only deprives them of their livelihood but also causes anxiety to their family members. Currently there are 114 Indian fishermen and 21 fishing boats in Sri Lankan custody.
An official source pointed out that the demarche follows the issue being previously raised with Sri Lankan Minister of Economic Development Basil Rajapaksa during his visit to New Delhi in July and by National Security Advisor Shiv Shankar Menon during his Sri Lanka visit the same month. And while the démarche was being served in New Delhi, Indian High Commissioner Yash Sinha raised the matter formally with the Sri Lankan Foreign Ministry in Colombo on Wednesday.
The official said the Consulate-General of India in Jaffna has been providing them with basic necessities and medical attention whenever required.
The Hindu
Share
Facebook
Twitter
Pinterest
WhatsApp