India failed to protect Tamils: ‘From Blood on the hands’ to ‘Blood money’ 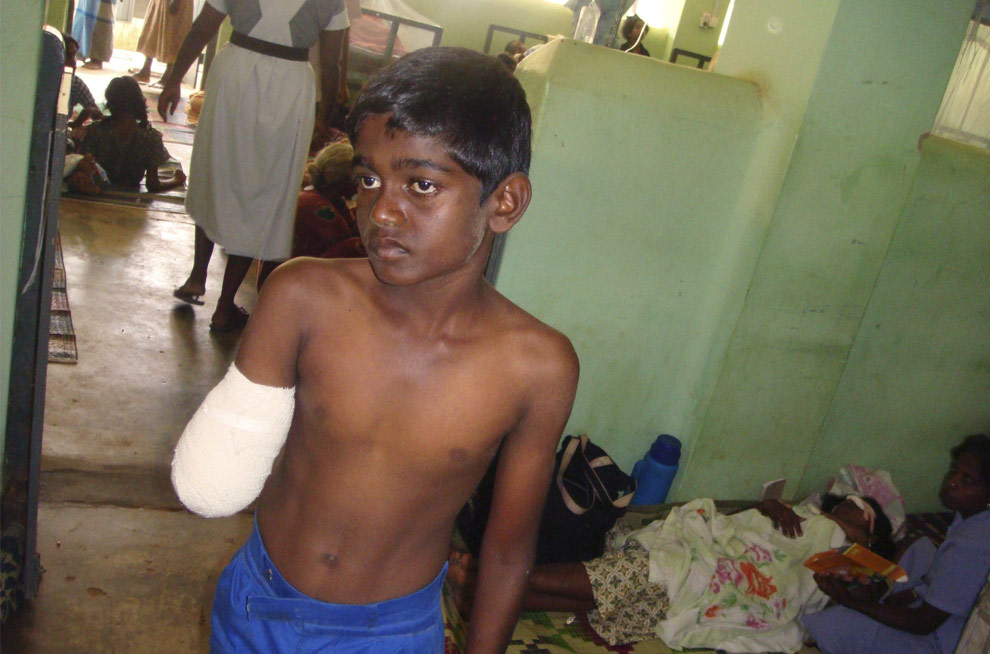 M.G. Devasahayam, Chennai.
C.    Why did India fail?
At the height of SL genocide when the 2009 Parliament election campaign was peaking in Tamil Nadu AIADMK leader, J Jayalalithaa, pompously declared: “If a government that listens to me is formed at the Centre, I will take action for the dispatch of the Indian army to the island nation and create a separate Tamil Eelam.” Professor Anbazhagan, General Secretary of DMK retorted: “Tamils are being destroyed in Sri Lanka. The place is full of widows who have lost their husbands, widowers who have lost their wives, and people who have lost their arms and legs. This has been going on for a long time. Sinhalas are making Tamils into heaps of corpses. But theirs and ours are different countries. The laws of that land are different. We cannot intervene”.
What did this mean in the context of the genocide in Sri Lanka? That the Tamils there are urchins and orphans to be deserted on the streets and cast to the vultures and wolves to destroy and decimate as they wish? Can a civilised society tolerate this?

Under Article 24 of the UN Charter, the Security Council has the primary responsibility for the maintenance of peace and security. It has the power to impose sanctions, establish peacekeeping missions, and authorise military action. As a signatory to the Charter, 1948 Genocide Convention, and the four Geneva Conventions of 1949, India was duty-bound to invoke the Security Council to halt the crimes against humanity and gross violation of human rights and civil liberties taking place in Sri Lanka. If Security Council had failed India acquired the right to intervene under R2P.

In February-May 2009 Sri Lanka situation was the ideal one to invoke the R2P. The world Tamil Diaspora was wailing in distress. But the UN Security Council merely indulged in meaningless semantics and bureaucratic procedures. China was reportedly blocking all efforts to even bring this issue on the discussion agenda of the Security Council.

India had an additional ground. Based on India’s efforts to broker peace between LTTE and GoSL the 1987 Indo-Sri Lanka Agreement was signed by Prime Minister Rajiv Gandhi and President JR Jayawardene that resulted in the 13thAmendment to the Constitution giving autonomy to the Provinces and merger of Northern and Eastern Provinces. At that time Jayawardene government was facing attacks by the LTTE in the north and the Janata Vimukti Perumana in the south and the then armed forces of the nation were unable to cope with the situation. As part of the deal India sent Indian Army contingent (IPKF) which enabled the Sri Lankan armed forces to put down the JVP insurrection in the south. While the IPKF succeeded to a large extent in disarming the LTTE, it was thrown out before completing its task by President Premadasa but not before hundreds of soldiers died in vain. Though India kept their side of the bargain at huge human and material cost, Sri Lanka reneged and took no measures to implement the same thereby heaping insult on India and its people. This gave added justification for India to invoke the doctrine of R2P in Sri Lanka.

Had India done this, it would have scaled moral heights. They could have brought the warring sides to the negotiating table and successfully resolved the festering conflict rendering justice to the Tamils without in any way compromising the standing of Sri Lanka as a sovereign nation. Not doing so was the biggest failure of India in its policy and dealings with Sri Lanka. In the event, in the eyes of Sinhalese and the Tamils, India became a loser incapable of acting decisively in the interest of justice and peace.

The reasons are not far to seek. In his paper “Developing India’s Foreign Policy Software” (2009), Daniel Markey (Council on Foreign Relations) identifies the flaws in India’s foreign policy set-up:

(1) The Indian Foreign Service is small, hobbled by its selection process and inadequate midcareer training, and tends not to make use of outside expertise;
(2) India’s think-tanks lack sufficient access to the information or resources required to conduct high-quality, policy-relevant scholarship;
(3) India’s public universities are poorly funded, highly regulated, and fail to provide world-class education in the social sciences and other fields related to foreign policy; and
(4) India’s media and civil society—those who debate the country’s foreign policy agenda—are not built to undertake sustained foreign policy research or training.

Added to these is the fact that India’s foreign policy lacks the depth and breadth of people’s (stakeholder) participation and Parliamentary oversight, an essential element in any democracy.

D.    Blood on India’s hands?
Soon after the war ended in May 2009 resulting in SL victory, President Mahinda Rajapakse succinctly summed it up: “I fought India’s war.”

Ambassador MK Bhadrakumar describes it in graphic detail: “As the curtain comes down in and we leave the theatre, the spectacle continues to haunt us. We feel a deep unease and can’t quite figure out the reason. Something rankles somewhere. And then we realise we have blood on our hands….It is the blood of 70,000 (actually 100,000) Sri Lankan Tamils who have perished in the unspeakable violence through the past quarter century.”

What is more, India followed up its war against the Sri Lankan Tamils by hugging and praising the Sri Lankan Government at UNHRC, Geneva. When European Nations moved a Resolution seeking enquiry into the genocide, gross human rights violations and appalling humanitarian situation in Sri Lanka, India opposed it tooth and nail and joined hands with China and Pakistan in sponsoring the self-praising counter-resolution tabled by Sri Lanka. European resolution was defeated and India played a very big role in this. Subsequently when there was a clamour for an International Commission of Inquiry into the cold-blooded massacre of 20,000 innocent civilians during the last days of the ‘war’, this was also strongly opposed by India.

The attitude, approach and policy of Government of India was the making of a bunch of bureaucrats, diplomats and an ex-General based in New York, Geneva and New Delhi, who had no clue as to what was in the interest of India and were driven by a pre-set agenda.

In the event, in July 2011, when the air with full with the Channel 4 documentary “Killing Fields of Sri Lanka”, almost the entire world seethed in anger, India was silent. Given this indifferent GoI mindset, Tamils in post-war Sri Lanka have been progressively reduced to serfs of the Sinhalese. This is endorsed by David Miliband and Bernard Kouchner, former foreign ministers of Britain and France respectively, when they wrote after a visit to Sri Lanka: “Tamil life is treated as fourth or fifth class citizens.  If foreign policy is about anything, it should be about stopping this kind of inhumanity.” This message was directed towards India.

Fact of the matter is that in the 2005 presidential election, Rajapaksa of the SLFP, a known hawk, won by the narrowest of margins. As President he wanted to outlive his image of a hawk and establish rapport with the Indian government and leadership, but was repeatedly rebuffed and in fact snubbed.  This made him realise the importance of involving civil society in Tamil Nadu to resolve the intractable ethnic problem in his country and act as a bridge between the two countries.  After much persuasion by Colombo, a small civil society core group was formed with me as the convener. The Group held two rounds of deliberations with President Rajapaksa at Colombo – 17 July, 2007and 25 March, 2008 – after preliminary discussions with his high-level team. During these deliberations many steps and confidence building measures were discussed to resolve the SL conflict. It was agreed upon that the political solution to the crisis should emerge from within Sri Lanka based on the basic premise of 13th Amendment, North-East merger, devolution and power sharing. After these parleys Rajapaksa made a public statement hinting at a merged, autonomous North-East, a solution just short if ‘Tamil Eelam’.

Accordingly an action agenda was set and GoI was informed.  Had GoI taken cognizance of this initiative, recognised this group as Track II Team, strengthened it and acted in concert by putting pressure on GoSL, the issue would have been resolved and Tamils would now be living in the island with honour and dignity. But, this was not to be!

Though this is the inner story, for outside consumption GoI has been putting forth certain rationale and reasons for adopting the kind of Sri Lankan policy that we have seen:

1.    India has a ‘Zero-tolerance’ policy against terror and had to support SL ‘War against Terror’;
2.    Defeat and elimination of LTTE was necessary for India’s National Security;
3.    India has to safeguard it geophysical interest in the region and not allow China an upper hand;
4.    Supporting Sri Lankan Tamil cause would sow the seed of ‘secession’ in Tamil Nadu;
5.    India needs Sri Lanka as a friendly neighbor for expansion of business, trade and commerce.

All these except the last one are untenable. A Report of Institute of Peace and Conflict Studies, New Delhi titled “India’s Sri Lanka Policy-Towards Economic Engagement’ (Brian Orland- April 2008)
reveal that despite the IPKF fiasco, relationship between India and Sri Lanka has undergone a period of significant recuperation since1990. India and Sri Lanka have a friendly diplomatic rapport, mutually benefit from economic cooperation in both trade and investment, and the bilateral relationship appears to be moving towards a strategic partnership. This happened because instead of a relationship focused on conflict intervention, India’s foreign policy has pushed economic engagement into the lead role in bilateral relations. The success of this suggests that a policy emphasizing economic relations and backing away from the highly contentious political issues of conflict-intervention, helped India push past the mistrust and resentment upon which India-Sri Lanka relations floundered in the late 1980s and early 1990s.

India seems set to continue with the same puerile agenda as is evident from what another Ambassador-G.Parthasarathy (2012)-wrote: “India’s ties with Sri Lanka will inevitably be strengthened on the basis of growing and mutually beneficial trade and economic relations. India views SL as a country whose past performance and potential for rapid economic growth (it is even now at an impressive 7.5% annually) make SA a reliable and long term partner  for bilateral and regional economic cooperation and integration. India has been committed to extending credits amounting to $1 billion for the upgrading and  and expansion of rail links and infrastructure in SL. Foreign Direct Investment by Indian companies in SL now exceeds $ 500 million and SL today India’s largest trading partner in SAARC. India has agreed in principle to collaborate in the construction of 500 MW power plant in Triconmalee. Tourist traffic has grown with 125,000 Indian tourists (20% of tourist traffic) visiting SL annually”. From ‘blood on hands’ to blood-money!

– From the  lecture delivered  at the INSD annual conference in Stuttgart , Germany, under the topic “Changes in India’s foreign policy and impact in Sri Lanka”
M.G. Devasahayam has diverse experience of serving in the Indian Army, Government (IAS), Corporate Sector, partaking in democratic process reforms, pursuing advocacy of public causes in the voluntary sector. His professional expertise is in the areas of Urban Development, Utility Management (Public Transport, Electricity), accountability and governance in public services.