India and Sri Lanka: A sea of conflict 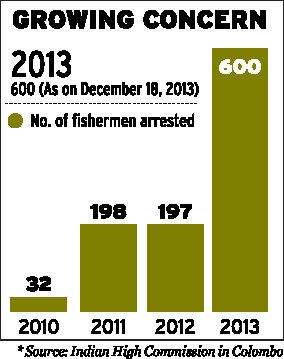 The haunting image — from a reporting assignment over a month ago — of an army of Indian trawlers charging towards the shore of Analativu, a small island in the northern tip of Sri Lanka, remains vivid in my memory.
Though there were no arrests reported that night, the Sri Lankan Navy, on several occasions before and after that, have arrested Indian fishermen on charges of trespassing. Not just in Analativu, but at different points off Sri Lanka’s northern and eastern coasts.
Indian fishermen have, over decades, fished in Sri Lankan waters — some have faced arrests; but the year 2013 has been particularly bad. A total of 600 fishermen from India — all from Tamil Nadu — were arrested by the Sri Lankan Navy this year, a sharp increase compared to the last few years (See box). Nearly 400 of the fishermen arrested this year have been released, while about 200 fishermen are currently in Sri Lankan prisons. A total of 107 trawlers were apprehended from the fishermen, of which the Indian side has retrieved about 40 so far.
Satellite images have, beyond doubt, established that Indian fishermen frequently cross the agreed-upon International Maritime Boundary Line (IMBL) that defines the two nations’ respective fishing zones on either side of it.
However, many including Tamil Nadu politicians, passionately argue in defence of the fishermen, usually on three major grounds: that the fishermen erroneously stray into Sri Lankan waters without intending to; that it would take time to deter fishermen away from a zone where they traditionally held fishing rights; and that it is, at the end of the day, about their livelihood.
The argument that the fishermen naively stray into Sri Lankan territory falls flat, for, virtually all the trawlers found trespassing are equipped with GPS monitors that would clearly indicate where they are headed.
Change of course

Even if Indian fishermen traditionally held fishing rights across Palk Strait earlier — they had the zone virtually to themselves during Sri Lanka’s 30-year civil war that ended in 2009 — four years is not too short a time to change their course. The idea of “traditional fishing rights” is also questionable, particularly when Indian fishermen are found coming all the way around, off the island’s north-eastern coast, near Mullaitivu.

And to all those staunch defenders of livelihood issues who argue that it is, after all, a question of survival for those “poor fishermen” and therefore has to be dealt with with more lenience: you are right. It is, indeed, a very serious livelihood issue. And that is precisely why it should not get enmeshed in shrill political rhetoric.
So far, every case of arrest plays out in a predictable fashion with all the actors playing their part well, exactly by the book.
The moment news of an arrest is out, Tamil Nadu politicians put out a strong statement condemning the “atrocity of the Sri Lankan Navy” and urging New Delhi to take a strong position that is not diluted by its diplomatic compulsions. Both the ruling AIADMK and the DMK in the Opposition and all other political parties in Tamil Nadu share the same position on the issue.
Soon, New Delhi assures Tamil Nadu that it would do its best to get the fishermen released soon, a cue for backdoor diplomatic exchanges. New Delhi and the Indian mission in Sri Lanka, in particular, seem to have had a very hard time throughout 2013 — caught between Tamil Nadu’s unreasonable demands and an increasingly strained diplomatic equation with Sri Lanka that effectively weakens its leverage vis-à-vis pushing for the rights of the Sri Lankan Tamils.
The Sri Lankan government, on its part, soon highlights how poaching by Indian fishermen has severely affected the Sri Lankan economy. Some forces within the Sri Lankan government also tend to use the fishing conflict to bait the Tamil National Alliance (TNA), which formed the northern provincial government recently, provoking it to take on Tamil Nadu in this matter.
The issue gets further complicated when Sri Lankan fishermen are simultaneously caught poaching in Indian waters — as many as 171 fishermen were arrested in October and November 2013 alone. The fishermen arrested there, it is reliably learnt, are Sinhala fishermen using well-equipped longliners.
Following these parallel arrests, the two countries virtually end up with a barter deal on the release of the arrested fishermen.
The Tamil Nadu government and Chief Minister Jayalalithaa, who has been strongly criticising New Delhi for its stance, has, in the last few years, taken no serious measures to deter its fishermen from poaching in Sri Lankan waters.
If Tamil Nadu politicians care for Sri Lankan Tamils as much as they claim to, how come they completely miss the larger point about Sri Lankan Tamil fishermen being the worst-hit in this maritime mess? If it is about Tamil Nadu fishermen’s livelihood, what is it then, for Sri Lankan Tamil fishermen on this side of Palk Strait who are struggling to cope with the after-effects of a brutal war?
2013 has shown that diplomatic trade-offs can, at best, be a myopic response to an acute problem. If the livelihood concern flagged by many is for real, then Tamil Nadu has the biggest responsibility.
It has to change its strategy from resorting to unreasonable, emotional outbursts to finding ways to equip its own fishermen in the best, long-term interest of their livelihood by, say, offering training in deep-sea fishing methods. It should actively discourage the fishermen from crossing the IMBL.
The TNA might want to open up channels of communication with the Tamil Nadu government to engage with it, particularly on the fisheries conflict.
An amalgam of Tamil political parties with varying degrees of Tamil nationalism among its constituents, the TNA has repeatedly emphasised how deeply it values the solidarity expressed by Tamil Nadu in support of Sri Lankan Tamils. However, only an ongoing dialogue between the party and Tamil Nadu will help get across certain specific realities about Sri Lankan Tamils.
Political stakes
Unlike earlier, the TNA also has political stakes with regard to this issue, as the Eelam People’s Democratic Party (EPDP), a member of the ruling coalition in Sri Lanka that had a strong support base among fishermen, seems to be losing ground to the TNA, going by its performance in the recent Northern Provincial Council (NPC) elections.
In Kayts, an island off Jaffna, for instance, the EPDP secured 31.48 per cent of the votes in the September elections to the NPC, as compared to the 71.99 per cent that it cornered in the 2010 parliamentary elections. The fisheries issue, therefore, offers new political space for the TNA provincial administration as well. Even if the TNA does its bit, the future of several thousand fishermen in Sri Lanka’s Northern Province — in Jaffna alone there are nearly 20,000 Tamil-speaking fishermen whose lives are tied to the sea — is, clearly, in Tamil Nadu’s hands.
The Hindu
Share
Facebook
Twitter
WhatsApp
Pinterest
Email