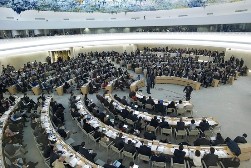 SLB news
India has refused to accept most far reaching recommendations proposed by Human Rights Council members to India under the second circle of UPR.  The accepted recommendations are mainly related to social, cultural and economic issues. Recommendations related to civil and political rights  have been left without any positive response.

Some of the important recommendations that were not accepted by India are listed below:

138.9. Ratify the International Convention for the Protection of All Persons from Enforced
Disappearance and recognize the competence of its Committee, in accordance with articles 31 and 32 (Uruguay);
P – 138.14. Ratify the Rome Statute of the International Criminal Court, including its Agreement on Privileges and Immunities (Slovakia);
P – 138.19. Ratification of the Optional Protocol to the Convention on the Elimination of Discrimination against Women (Brazil);
P – 138.25. Consider the recommendation made by UNHCR to ratifying the Conventions relating to refugees and stateless persons (Ghana);
P – 138.26. Ratification of ILO Conventions Nos. 138 concerning Minimum Age for Admission to Employment; 182 concerning the Prohibition and Immediate Action for the Elimination of the Worst Forms of Child Labour;
P – 138.35. Review the law on the special powers of the armed forces to align it with its obligations under the International Convention on Civil and Political Rights (Switzerland);
P – 138.44. Repeal the Armed Forces Special Powers Act or adopt the negotiated amendments to it that would address the accountability of security personnel, the regulation concerning detentions as well as victims’ right to appeal in accordance to international standards (Slovakia);
P – 138.47. Take adequate measures to guarantee and monitor the effective implementation of the Prevention of Atrocities Act, providing legal means for an increased protection of vulnerable groups like the Dalit, including the access to legal remedies for affected persons (Germany);
P – 138.50. Reconsider current local legislation on freedom of religion, that uses vague or broad terminology and discriminatory provisions, and impedes the possibility for conversion of faith for those who wish to do so (Netherlands);
P – 138.56. Implement the 2011 recommendations of the International Coordinating Committee of National Institutions for the Promotion and Protection of Human Rights to ensure the high standards and independence of India’s National Human Rights Institutions (United Kingdom of Great Britain and Northern Ireland);
P – 138.62. Strengthen the process for ensuring independent and timely investigation mechanisms to address and eliminate corruption; and provide for and facilitate increased accountability and transparency in this process (United States of America);
P – 138.68. Implement the recommendations made by the Special Rapporteur on the rights of human right defenders following her visit in 2011, with particular emphasis on recommendations that concern defenders of women’s and children’s rights, defenders of minorities rights, including Dalits and Adavasi, and right to information activists (Norway);
P – 138.92. Abolish capital punishment and commute existing death sentences to life imprisonments terms (Slovakia);
P – 138.109. Continue stepping up efforts in the area of fighting trafficking as well as consider the possibility of inviting the Special Rapporteur on trafficking in persons, especially in women and children, to visit the country (Belarus);
P – 138.119. Guarantee effective access to justice in cases of human rights violations committed by security forces personnel with regard to the use of torture (Spain);
P – 138.126. Ensure that measures limiting freedom of expression on the internet is based on clearly defined criteria in accordance with international human rights standard (Sweden);
P – 138.149. Meet the stated commitment from the Common Minimum Program of 2004 to dedicate 3 percent of India’s GDP to health and 6 percent to education (Slovenia);
138.8. Ratify the Convention against Torture and Other Cruel, Inhuman or Degrading Treatment of Punishment as soon as possible (Maldives);
–          UPR INFO
List of accepted recommendation by India click here
Stake holder submissions for UPR India 2012  click here
Share
Facebook
Twitter
WhatsApp
Pinterest
Email